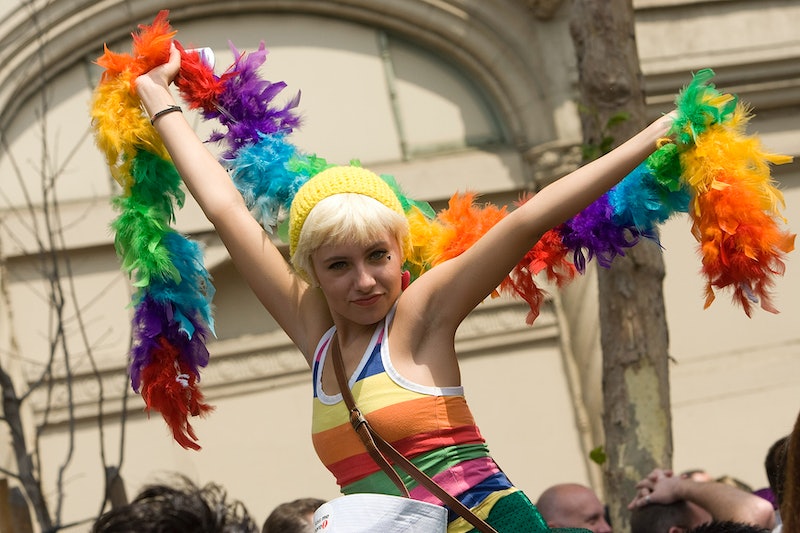 It’s National Coming Out Day, and considering the recent flurry of positive news on the gay rights front, it might seem like a time to celebrate. However, a new study from researchers at Boston University and Ohio State suggests that public embrace of the LGBT rights may not be quite as widespread as we'd like to think. The purpose of the study was to measure levels of both homosexual experience and anti-gay attitudes, but with an added dimension: The researchers didn’t just want to know how people felt about homosexuality; they wanted to know how people’s stated attitudes about homosexuality differed from their actual feelings. After all, you never know if a respondent is telling the truth in general, and this is doubly true when it comes to touchy issues like sexuality.

To accomplish this, the researchers use something they call “veiled elicitation method,” which attempts to correct for social desirability bias — aka the inclination of respondents to give what they perceive to be the more culturally-acceptable answer, rather than their true feelings. This method is also known as the “item count technique.”

A control group of subjects was given a list of innocuous statements and asked to indicate how many they agreed with. Another group was given the same list, but with an additional, “sensitive” statement — one that suggested either same-sex attraction or homophobia.

Here's how it worked (sorry in advance for the wonkiness): by comparing the average number of “yes” answers for the first group with that of the second, researchers could infer what percentage of people responded in the affirmative to the sensitive statements. With a large enough sample, this percentage can be extrapolated to a population as a whole. The last step was to compare this inferred estimate with what people said when flatly asked how they feel about same-sex attraction; that way, the study’s authors could get an idea of the discrepancy between people’s true feelings and their stated feelings.

The results were revealing, to say the least. For one, self-reports of same-sex sexual experience go up by 59 percent when you control for the social desirability bias, and non-heterosexual self-identification goes up by 65 percent. In other words, people are gayer than they’ll readily admit.

Actually troubling, however, is that people are apparently a lot more homophobic than they admit as well. Respondents were 71 percent more likely to say it’s okay to discriminate against LGBT people when the veiled method was used, and 67 percent more likely to disapprove of an openly-gay colleague. As Slate’s Nathaniel Frank writes, this brings up some difficult questions about the broader aims of the LGBT rights movement:

Just what is—and should be—the goal of the gay rights movement? Does equal treatment mean straight people say the right things and pull the right levers, or does it go deeper than that, extending to how people really think and feel about homosexuality in their hearts?

Oy. That’s a question more suited to a book or panel debate than a mid-length blog post. Needless to say, while attitudes toward homosexuality may indeed be shifting in the right direction, we certainly have further to go than we'd like to think.