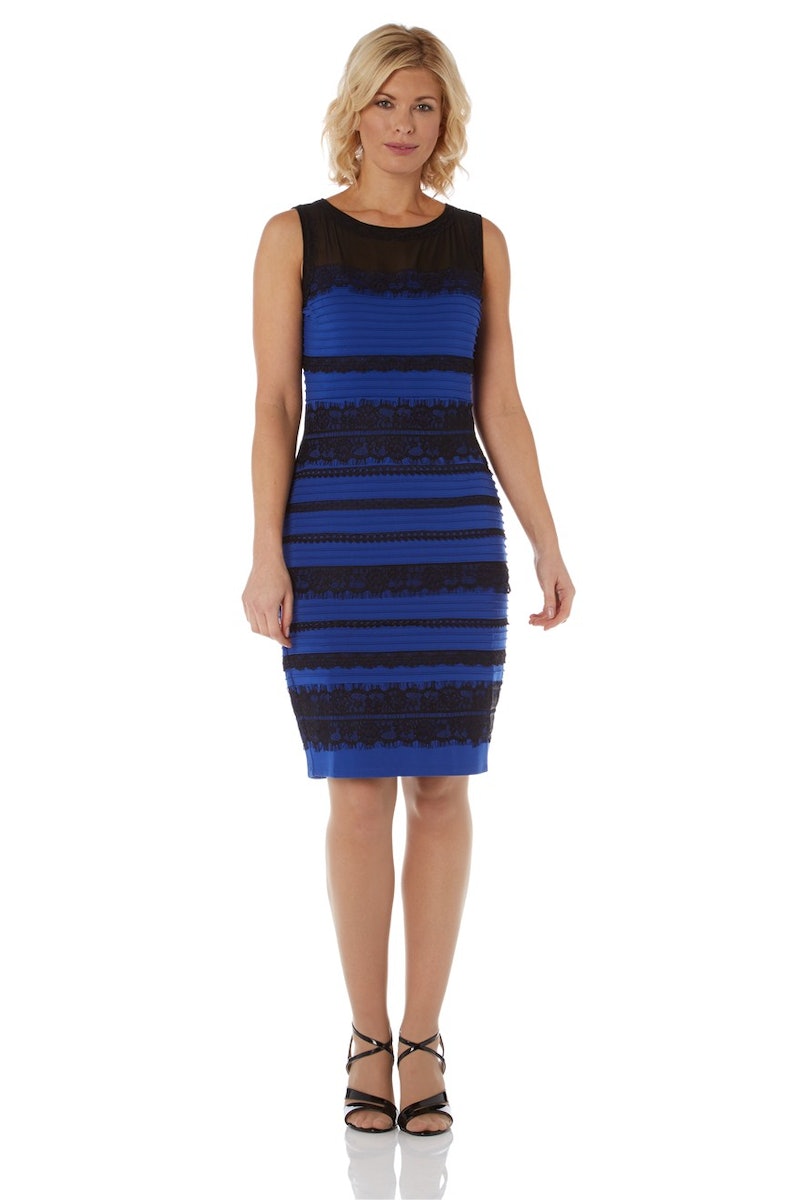 #TheDress has more controversy surrounding it that unfortunately goes much deeper and is way more concerning than whether it is blue and black or whether it is gold and white. #TheDress was the hottest topic of the web last week and its infamy this week may center on the fact that Roman Originals, the retailer of #TheDress, has had past child labor issues. Ugh.

As the Mother Jones report notes, Birmingham's Roman Originals is enjoying increased sales over the ensuing dress color drama that owned the w-w-w. A white and gold version be produced for sale alongside the black and blue version and for less than 80 bucks.

But with all this increased fame and fortune, some icky, unsavory stuff has been unearthed.

Back in 2007, The Observer investigated garment sweatshops in India. Several sweatshops, including a subcontracted one, employed children who were making clothes for Roman Originals.

Dan McDougall, a reporter, was investigating a U.S. firm but had accidentally unearthed Roman Originals practices. Adrian Fisk, a photojournalist accompanying the reporters, noted the abhorrent conditions of filth and poverty, revealing that the workers were around 13 or 14, while some were as young as seven. That's pretty tragic and, well, wrong.

The statement at the time read as follows, according to Mother Jones: "We were horrified to see these pictures and immediately launched an investigation into our suppliers. We had visited the suppliers and were presented with an adult-only workforce and practices that satisfied our standards. It appears that our supplier sub-contracted a portion of the business and this is where the problem occurred."

Roman Originals has yet to respond to Mother Jones' new inquiry about current policies and where, exactly, #TheDress was made and by whom, which translates to: "Was it made by children?"

But it doesn't end there.

McDougall himself expressed concerns that the desire to replicate #TheDress quickly to meet this new customer demand in light of the web heat could lead to further use of child labor outside the UK.

"There's no question in my mind that the firm will be all hands to the pumps to cash in on the publicity and turn around as many of these dresses as they possibly can. It's a marketing dream," McDougall told Mother Jones. "But what concerns me, from experience looking into many firms, is ordering huge amounts of garments on quick turnaround can place enormous pressure on supply chains. So I hope Roman Originals make a guarantee to everyone interested in ordering the dress that it will be produced in an ethical way."

McDougall would actually like to see Roman Originals do something standup, rather than merely capitalizing on the publicity generated by #TheDress, telling Mother Jones, "Rather than make it a poster child for color blindness, why don't they make the most famous dress in the world…the poster child for fair trade or sustainable production?"

Now there's an idea. Roman Originals responded to Bustle's request for comment with the following statement, which does give me a good feeling that they're done with these unfair practices for good:

In April 2007 when we were approached, along with other high street retailers, for comment on a newspaper article, we were horrified to see these pictures and immediately launched an investigation into our suppliers, at this point we cancelled the contract immediately and never received or sold the garments.

We had visited the suppliers and were presented with an adult-only workforce and practices that satisfied our standards. It appears that our supplier sub-contracted a portion of the business and that is where the problem occurred.

Since that time, 8 years ago, we have reinforced contract terms with suppliers. We will terminate relations with suppliers guilty of certain "transgressions" and those unwilling to make the "necessary changes" to their employment practices if there were any breaches of our contract are uncovered.

That seems like good news for everyone hoping to get their hands on a fair trade version of the white and gold gown. I'd love to see the retailer go one step further and take a firm stand against those practices, using its newfound fame as a platform for a greater global good.

More like this
15% Pledge Director LaToya Williams-Belfort On The Impact Of Supporting Black Business
By Dominique Norman
Berriez Founder Emma Zack On Her Size Inclusive NYFW Show
By Dominique Norman
Chris Kaba's Family Continue Fight For Justice After Viewing Police Bodycam Footage
By Sophie McEvoy
Prefer Alcohol-Free Perfumes? Water-Based Fragrances Are On The Rise
By Audrey Noble
Get Even More From Bustle — Sign Up For The Newsletter