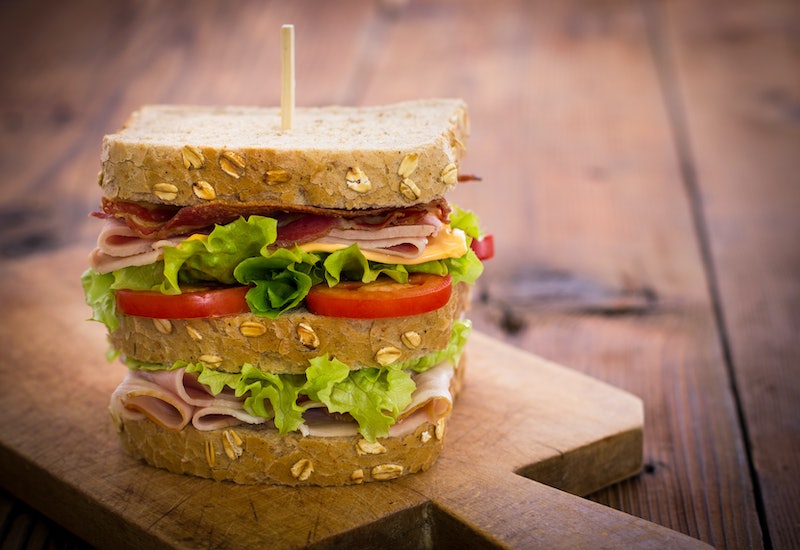 I've never totally understood the concept of "Hump Day," but from what I gather, silly puns are one of the more acceptable ways to celebrate it. So here — have one: #FoodieBandNames is currently trending on Twitter, and it is truly a work of art. If this spectacular hashtag can't get you through Hump Day, then nothing will. Because food plus music with a dash of groan-worthy humor is a combination that just can't fail.

At first I was half-convinced #FoodieBandNames was the work of @Midnight, which previously brought us the glory that was #CheeseSongs. However, after a little of digging, I discovered that #FoodieBandNames came from a somewhat unexpected source: Zagat. I mean, yes, I realize that restaurant reviews are Zagat's bread and butter (if you will); as such, perhaps I shouldn't be surprised that a food-based pun arose from the depths of its social media accounts. But normally when I think of Zagat, I don't think of goofy, hilarious puns — I think of… well, overly serious food writing. As Edible DC noted, therefore, it's a little unclear what might have inspired Zagat to let down its metaphorical hair and dream up the hashtag in the first place — but you know what? Maybe it doesn't matter. What matters is that the Twittersphere rose magnificently to the challenge, which began as follows:

Not only that, but Twitter is still rising to it; a full 19 hours later after it began, #FoodieBandNames is still going strong. True, we're starting to get a few repeats — such is the nature of a long-running hashtag — but I'm willing to forgive the overlap, because, well… who could resist “The Rolling Scones?” No one. That's who.

But maybe I'd better let the hashtag speak for itself. Check out a few of my favorites below, and head on over to Twitter to watch #FoodieBandNames unfold in real time. Rock on, my friends. Rock on.

Another popular choice was Fleetwood Big Mac, but I like this one better. Mac and cheese all the way.

I would much rather have pancakes when I go to the disco. Pancakes are way better than panic.

This one made me giggle, Ron Swanson-style.

Bless you, Michael Chiklis. Bless you.