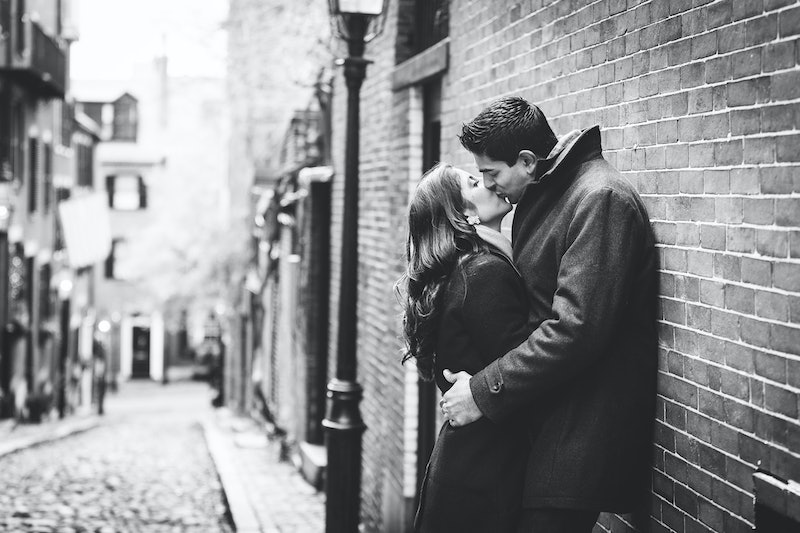 Physical infidelity within a monogamous, long-term partnership is fairly clear-cut: You hooked up with a person who isn't your partner while engaged in a relationship where the deal was that neither of you would do that. If only all cheating were categorized by meeting such a simple criteria. There's all kinds of treachery possible in relationships! Take for example, the slippery case of emotional adultery. And most of us keep our smartphones within quick grabbing distance, a fact that some argue has further blurred the lines between devotion and deviance. The idea of cheating within an exclusive LTR has gone through a bajillion rounds of definitions. It's not surprising a lot of people are left utterly confused with what the term cheating actually means—and those opinions tend to vary among genders to boot.

Regardless of all the different dishonorable ways you can crush your partner's heart, boundaries still exist. Jealousy and insecurity have the power to cloud an otherwise crystal vision. Dangerous mindsets like that suggest an S.O.'s totally harmless opinions, behaviors, or tastes in some way qualify as cheating. Surely all couples have their own unique trust preferences and comfortable parameters, but when anger flares over silly stuff...seriously? These innocent acts and attitudes fall under wrongful scrutiny because—well, they aren't cheating. Let's all chill for a sec and review what doesn't actually qualify as infidelity.

Having pre-existing, attractive, platonic friends of the same gender to which you're attracted

Something cool about being a functioning human is that we can have control over ourselves. Meaning, should we have a platonic friend who happens to be a full-on babe, we can actually refrain from grinding up on 'em. In fact—and I know this sounds crazy—we stop seeing them as a babe altogether and see them as something so bizarre: a multifaceted, cognizant being. No one should ever have any time for someone who isn't capable of seeing hot people as more than sexual objects. If someone you're dating isn't comfortable with you having platonic friendships with people who match the gender and orientation you're typically attracted to, then not only are they probably too untrusting and insecure for you to be dating, but they clearly have an annoyingly limited sense of the kinds of relationships people are capable of having.

Making NEW attractive, platonic friends of the same gender to which you're attracted

Don't mean a thing other than indication other people who like BronyCon as much as you also exist. Here's a new friend, emphasis on that only. Drake was wrong—new friends are fine.

Remaining congenial with an ex

Everyone has a past and some people have the abilities to overcome the difficult parts of that past with the people in it, working their histories into healthy realities. As long as you keep it honest, there should be no offense in keeping people around who you used to date.

Spending time alone, even when you're in a relationship (wait—especially if you're in a relationship) regularly is wise, if not completely necessary. When someone doesn't respect your need to tend to your kombucha project or just reading in private twice a week, that's bad news. Autonomy is super vital and your partner should not just know that but also be cool with it. Needing some You Time is not tantamount to infidelity, which yes, is a thing that some of the clingiest clingers will claim.

Guess what smiling and tipping a service industry professional means? It means you're a decent person. Some things it doesn't mean: you wanna tap that, you're not wearing underwear, you're going to think about that bartender next time you bang your S.O., etc. How is it possible that some people think that "being polite" or even "being friendly" is the same as "giving someone a green light to access your panties"?

Dancing with other people

Groove things have got to be let loose and shaken from time to time. In most relationships I've experienced or known, only one half of the couple digs hitting up the dance floor. It's a tragedy, really, but not a valid reason to hang up those boogie shoes forever. As a result, we often catch the opportunity to dance with friends, friends-of-friends, or—get ready—strangers. Dancing, despite what Footloose suggests, does not carry a hidden agenda and as long as your chosen moves don't include straight-up humping, you're in the clear.

Demonstrative greetings are chill, assuming they're relatively brief, include clothes, and don't involve a lot of mouth-to-skin action.

Getting drunk without an S.O. also present

Sure, you love getting a little bit wasty-face with your significant other, but life happens and sometimes your partner isn't around to join in the fun. Does that mean the fun shouldn't happen without them? Hell no. Also, time spent separate from each other is a healthy thing. As long as you aren't turning into that person who regularly comes home each night around 4AM falling down wasted, there shouldn't be anything traitorous or uncool about you getting your drink on without your main boo around.

Just...don't even start with this. No matter what your relationship status, you're allowed to wear whatever you want. Period. We wear clothes for ourselves, first and foremost. A carefully curated outfit is very unlikely designed to attract onlookers and/or people with whom we're definitely gonna bone.

When you go forward alone with a TV series you started with a partner, that isn't cheating. But it also isn't very nice and I don't recommend doing it.

An easy way to evaluate cheating? If you feel like you need to hide it from your partner, you shouldn't do that. Honesty is important. Remember, Netflix never forgets.