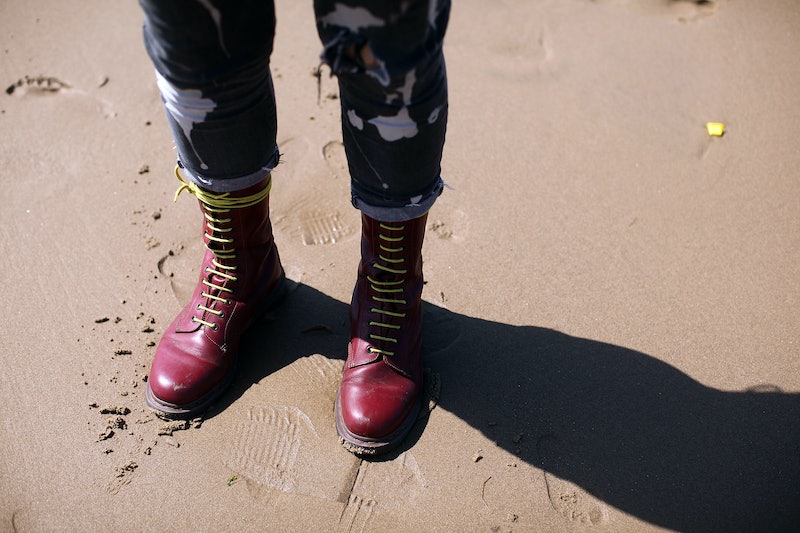 What do Sid Vicious and Miley Cyrus have in common? They’ve both been known to be partial to a pair of Dr. Martens and, whilst I can only speculate, I suspect very little else. Dr. Martens seem to be seeing ever-increasing popularity over the years, and their iconic image has endured many fading trends and subcultures, always finding a way to be relevant and adored regardless of which fashion trends come and go.

Recently, Adventure Time fans jumped for joy with the announcement of a new Adventure Time Dr. Martens collection featuring the colorful characters of the show, and who could forget the prolonged period when the whole world seemed to be talking (or typing) about Miley Cyrus’s appearance swinging on a wrecking ball wearing nothing but a gorgeous pair of cherry red Docs?

That's not the only time she's appeared in Dr. Martens, either. Miss Cyrus seems to have adopted them as one of her go-to footwear staples. Even this hasn't deterred more "alternative" people and subcultures from wearing DMs. Whatever happens to (or in) Dr. Martens, their appeal remains wide-ranging and in tact. Even that one occasion in which a stranger in the street shouted “RACIST BOOTS” at me (presumably due to the boots' former association with racist and violent strands of Skinhead subculture — which I will discuss later) has not stopped me wearing them (although it did make me think twice about the message I was sending out into the world).

The first Dr. Martens as we know them rolled off the production line on April 1, 1960, after a collaboration between British shoe manufacturer Bill Griggs and Dr. Klaus Maertens — a World War II soldier who had broken his foot whilst on leave and developed the trademark "bouncing souls" in their rudimentary form to help take the weight off his foot. The name "AirWair" was coined in reference to the air pockets in the soles that make these boots so comfortable to wear (after an initial breaking-in period, during which it’s best to wear thick socks and stock up on plasters until the leather softens, in my experience). "Maertens" was anglicized to "Martens" to try and broaden the brand’s appeal, and then the classic 1460 was born.

Built more for function than fashion, it must have seemed unlikely back then that DMs would become such an enduring fashion staple. In the late 1970s, Dr. Martens were cited as standard police footwear in the U.K. as the oil resistant soles made them suitable for dealing with traffic accidents. The boots were also popular with factory workers and builders due to their practical, sturdy nature.

So how did these boots become such a definitive cultural icon?

It began with the Skinheads, around 1963-4 in the U.K., who adopted the boots as part of their image, in keeping with their working class pride and anti-fashion mentality. Their uniformity was almost like a badge of membership — sometimes to their detriment, as the image of Skinheads was marred by a violent and racist minority of the subculture.

Gavin Watson talks of his experiences growing up as a Skinhead in an article for The Guardian, describing how it was a rite of passage to “christen” a new pair of DMs “by kicking someone with them. It didn’t matter who, and if you got blood on them that was even better.” Bear in mind that, at this stage, Dr. Martens were being produced mainly as workwear, thus featuring steel toe caps. Ouch.

In the same article, Sarfraz Manzoor describes how “as a young Asian boy growing up during that time, [he] was both attracted to and repelled by Dr. Martens.” He coveted his brother's pair “and yet the association with Skinheads and racists was so strong that if I saw anyone wearing [them] I would assume they meant me harm.” It is interesting that, despite their association with a group of people he feared, the boots themselves still harbored some appeal.

It is also interesting to note that during this period — as DMs crept their way into youth subculture — police officers of Great Britain were still wearing them. Groups of more violent Skinheads would clash with the police, both collectives clad in this iconic footwear. Although by 1972 the first wave of Skinheads was effectively over, as the violent anti-social image took over, the movement had wrenched Dr. Martens from the workplace and rooted them in youth subculture. During subsequent trends, Docs showed durability and flexibility to change and their popularity continued.

In the 1970s, Punk exploded across the U.K., USA and Australia and Docs proved popular amongst this movement, too. At this stage, they were still only available in black or cherry red, so some punks took to customizing their Docs as a badge of individuality — a key theme in punk fashion and the DIY ethics of the movement. Dr. Martens were edging their way into the psyche of politics and alternative thought — something the brand still prides itself on today.

Come the 80s, musicians such as Madness and Morrissey were known for wearing Dr. Martens, with members of their followings imitating their style, and it was also during this era that AirWair noticed an increase in sales of smaller sizes — more and more women were wearing Docs. DMs finally seemed to shake off their association with more violent subcultures and this, combined with the increasing numbers of women wearing them, meant they gained popularity amongst a new generation of wearers. By 1994, 50 percent of Dr. Martens wearers were female and the company had begun to produce more colors, patterns and styles.

As a female fan of Docs, I can personally vouch for the feeling of empowerment and pride my Dr. Martens give me. I have always felt awkward and helpless attempting to teeter around in high heels — unlike many women who can actually walk in them and find the feeling empowering. Dr. Martens were truly my first fashion love. I can still remember my first pair — bright blue 1460s that I wore to school around age eight. Some of the other kids laughed but those boots made me feel indestructible.

I sit writing this article in a gorgeous 20-hole patent black pair, which still give me that same feeling. Dr. Martens have helped me deal with difficult situations at work, teenage hecklers in the street and late night walks through the mean streets of Manchester without feeling vulnerable. As Gavin Watson describes of his Skinhead days, “Those boots were seen as weaponry and you felt safe wearing them.” Whilst I’m not planning on kicking any heads in any time soon, I do feel safe in my Docs. A pair of Dr. Martens and a confident — albeit heavy-footed — stride have been a consistent part of my identity from my teens to my current point in my twenties and I can’t imagine I’ll be ditching the boot any time soon.

The seemingly ever-increasing popularity of Dr. Martens has of course impacted their production, with much of the work now being outsourced to Asia and only special "Made in England" collections being produced at the original Griggs factory. According to the Dr. Martens website, this has had no effect on the quality of the footwear and all their manufacturers are closely monitored in order to meet a strict code of conduct to provide an ongoing improvement of working conditions for staff.

Such is the popularity of Dr. Martens now that even cheap imitations have appeared in some stores — although this throwaway fashion is not built to last like authentic Dr. Martens. My oldest pair saw me through four years of university (and beyond), during which time I was walking at least five miles a day to and from bus stops — five days a week — and even inspired a whole art project during that time. I very much doubt I would have had the same mileage from a cheap plastic pair of lookalikes.

As a long-term lover of Dr. Martens I may be biased, but even sales figures suggest that after fifty years of weaving their way into and out of various trends and subcultures, these beauties aren’t going anywhere any time soon.

Note: Much of the information in this article — where not otherwise linked or anecdotal — was sourced from AirWair's 1999 book Dr Martens Air Wair.

More like this
Phoebe Dynevor Serves ‘Bridgerton’ Underboob In Stunning Floral Gown
By El Hunt
This Dark Humpty Dumpty Theory Will Haunt You
By El Hunt
J.Lo's Micro-French Manicure Has A Fun, Sparkly Twist
By Olivia Rose Rushing
9 Must-Know Tattoo Trends For Spring 2023
By Carolyn Steber
Get Even More From Bustle — Sign Up For The Newsletter
From hair trends to relationship advice, our daily newsletter has everything you need to sound like a person who’s on TikTok, even if you aren’t.