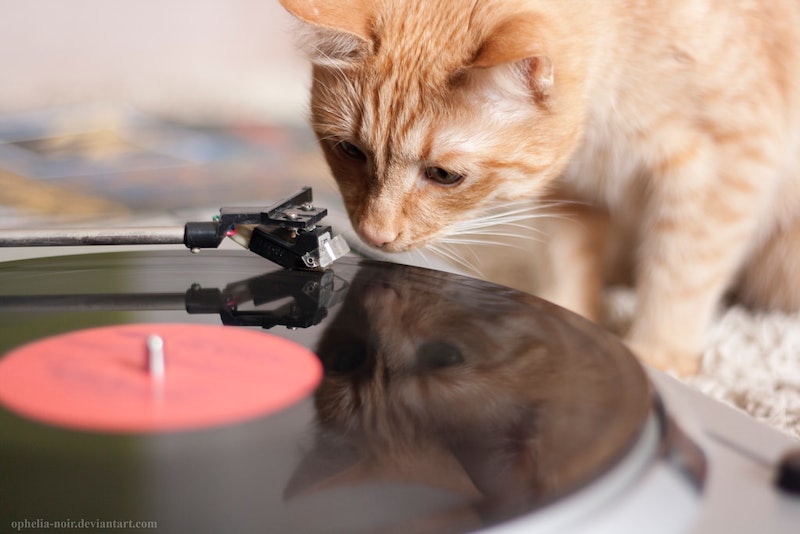 What would you do if I told you that science has created music just for cats? Would you rejoice? Would you groan? Would you start planning for the day the cats take over the world and throw us into a post-apocalyptic society not unlike a feline version of Planet of the Apes? Well, whatever you'd do, get ready to do it — because it's true. New research conducted by Charles T. Snowdon and Megan Savage of the University of Wisconsin has resulted in music designed specifically for cats. No, I am not kidding. And yes, you can listen to it yourself, thanks to the wonders of the Internet.

Snowdon and Savage theorized that the reason cats mostly ignore music isn't because they hate it in general; they actually hate human music in particular. “In order for music to be effective with other species,” the researchers postulated, “it must be in the frequency range and with similar tempos to shoe used in natural communication by each species.” Accordingly, they composed “species appropriate” music for a few different types of animals, with their first paper focusing on the music they created for cats. They worked with composer and musician David Teie on the tunes themselves; then they played them for 47 domestic cats, in the cats' homes and with their humans present. Cats are creatures of habit, after all.

The songs come in three varieties: Kitty Ditties, Cat Ballads, and Feline Airs. The ditties use the kinds of animal calls that cats seem to like (bird chirps, for example) in order to “arouse interest and curiosity”; the ballads mimic “the sound of suckling” as a way to relax them; and the airs function like purring to “draw sympathetic emotions from the listener.” And hey, guess what? It turns out that cats really do like music created just for them more than they like human music. When the cat music played, they rubbed their heads on the speakers — which, as we all know, is cat-speak for:

Whereas they pretty much ignored the speakers when Bach piped out of them. Younger and older cats in particular responded well to the cat tunes — more so than middle-aged cats. Interesting, no?

Because I happen to have two cats at my disposal at all times (or perhaps accurately, they have me at their disposal at all times), I conducted an incredibly unscientific experiment: In an attempt to see how actual felines might react to these magical cat songs, I corralled one of my furry buddies (Nymeria, whom you previously met when I stuck Pharrell's hat on her head) and played her the three sample clips available on the Music for Cats website. She's about two years old, and when she's not sleeping, she's usually busy running around like a maniac. Here's what she thought:

“UGH WHY ARE YOU DOING THIS TO ME.”

I think it's safe to say she was unimpressed.

You know what does make my cats go nuts, though? Those apps that mimic cat noises. I downloaded one once to see whether they would like it, but it just confused them. They kept looking around first for each other, then for the other cat they were convinced we were hiding somewhere in the house. Then I felt bad for making them freak out so much and deleted the app. You win some, you lose some.

But the cat music research isn't just for the lulz; Snowdon told Discovery that that it could be useful both for shelter cats and for cats that are used to having humans around. Said Snowdon, “We think of cats as highly independent of their human servants, but there is some research showing that cats experience separation anxiety, which is greater in human-raised cats than in feral cats.” I can imagine the ballads in particular coming in handy if you have to leave an anxious cat alone for a few hours while you run errands or whatever.

In any event, head on over to Music for Cats' home on the web in order to hear more.

More like this
You Can Stay At The 'Hocus Pocus' House On Airbnb
By Alexis Morillo
Craving The Beach? Here's Your Guide To A Solo Vacation In Turks & Caicos
By Alexis Morillo
Behind The Hilarity Of The "POV: You Walk Into My Room" TikTok Trend
By Lexi Inks
How To Turn Off Night Mode On Your iPhone Camera
By Emma Carey
Get Even More From Bustle — Sign Up For The Newsletter