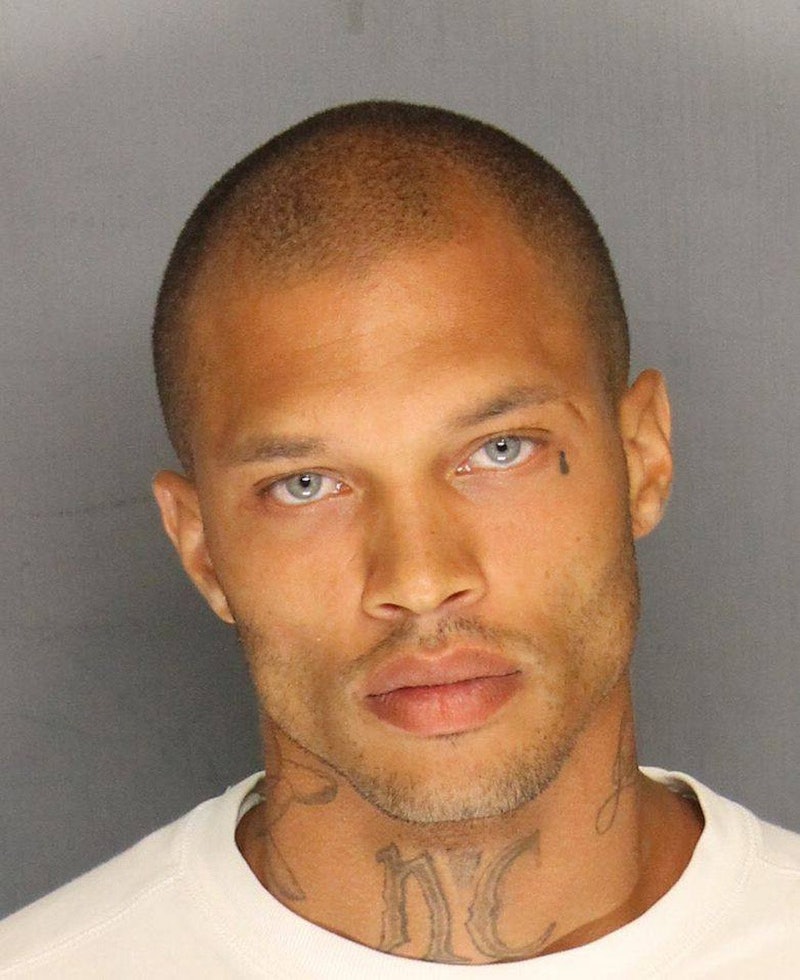 When Jeremy Meeks' mugshot hit the Internet, people worldwide legitimately lost their minds. A quick scroll through the comment thread would provide you with a plethora of come-ons scandalous enough to make even the writers of 50 Shades of Grey blush. Not since Burt Reynolds posed as a centerfold for Playgirl has a man been at the epicenter of so much crazed female (and male!) objectification and lust. But just when you thought the Meeks madness was finally beginning to fizzle out, news comes along that is sure to send many libidos back into overdrive: Jeremy Meeks has officially signed a modeling contract with White Cross Management.

Last summer, at the height of the "Wold's Hottest Felon" meme, when Meeks photo was being passed around faster than that baby weasel riding on the back of a woodpecker, there were rumors that the convict had signed a $30,000 modeling contract with Blaze Management. But thanks to some serious sleuthing by Bullett Magazine writer, Luke O'Neill, this story was proven to be nothing but gossip proliferated by an erroneous TMZ article. Though there were a number of contracts and opportunities extended to Meeks, as soon as it became clear that the convicted felon would be spending some serious time behind bars, all offers were quickly rescinded.

But White Cross Management doesn't appear to be daunted by the 30-year-old's criminal record, or his yet-to-be-completed twenty-seven month jail sentence for possession of a fire arm. Not only have they signed Meeks, but the agency is even using his mugshot on their website in place of the typical model's comp card. It seems Meeks is also ready to jumpstart his career, telling ABC news that he's keeping himself in good form for when he finally gets paroled, which should be in November, dependent on good behavior. He gave ABC insight into his workout regime saying, “I eat healthy. I do a lot of push-ups, pull-ups, dips, burpees, and I stay very active."

According to his new agent, Jim Jordan, Meeks will need to be looking his best come fall in order to take on the barrage of new job offers that are about to come his way. Though the initial, trumped up reports stating that Meeks could walk for Givenchy or Prada have slowly faded away, Jordan still believes that "there is a sea of opportunities waiting for him." Jordan told ABC News that when Meeks leaves prison he will be set up with "modeling agencies around the world, endorsement deals, and reality show interests."

Let's just hope he can replicate the magic of that single mugshot heard round the world.