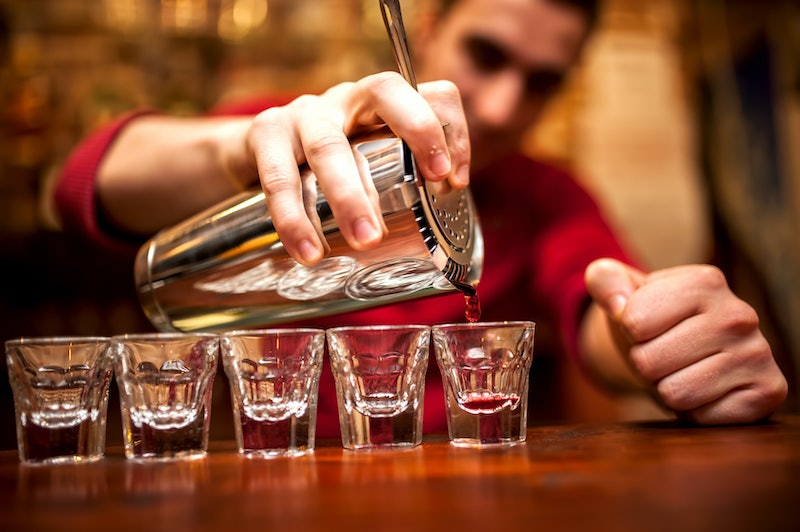 The ability to enjoy a good tipple without feeling like hell the next day is a much-coveted skill — and now science might actually be able to make it happen: British neuropsychopharmacologist Dr. David Nutt has reportedly developed several innovations that will allow us to drink without getting hungover. Not only that, but we won't experience any of the other unpleasant things that sometimes go along with a crazy night out, either. The news of Nutt's creations isn't exactly new; in fact, we've been hearing about them on and off for the past several years. They're making the rounds again, though, so in case you've missed the story so far, here's where we're at with it.

Nutt's innovations are twofold. First, he's been working on a form of synthetic alcohol that lets you experience all the joys of being tipsy, but with none (or at least, fewer) of the negative side effects. “Alcosynth,” as Nutt calls it, is a derivative of benzodiazepene, which you might know as Valium; this makes sense, given that both Valium and alcohol are depressants. But by getting your ya-yas through alcosynth instead of booze, you'll also apparently forgo killing your liver, losing control over yourself, getting inexplicably angry, and — yes — experiencing hangovers the next day. Nutt also says that alcosynth doesn't have the same addictive properties of Valium, so there's that, too.

And second, Nutt has created a pill called “chaperone,” which functions as a quick way to sober up. I'm unclear on whether this pill combats alcohol itself or just alcosynth — various sources make it sound like it might be either — but based on something Nutt told Wired back in 2013, I think it might apply specifically to alcosynth (emphasis mine): “We can get rid of most of the toxicity. We'll have a compound maybe 100 times safer than alcohol. Because it targets a specific receptor in the brain, we can reverse the effects if people want to drive home.” The Wired piece then goes on to say, “The antagonist could come in the form of a pill, or a dissolvable film that is placed under the tongue.” All of this sounds quite similar to The Telegraph's more recent report on it, which notes that “this 'sober up pill' could be popped on the way home, reducing drink-driving accidents and other alcohol-related incidents and crime.” That's all speculation on my part, though, so it's entirely possible that the pill would counteract the effects of actual alcohol, rather than alcosynth — or maybe even both. The jury's still out on this one.

Before we delve any further, it's probably worth noting that Nutt has a little bit of a reputation—and not necessarily a good one. Although he is undoubtedly good at his job, he was fired from his position as chairman of the Advisory Council on the Misuse of Drugs in 2009. The issue largely stemmed from the fact that he fundamentally disagreed with how the British government classified illicit substances; he felt that drugs should be classified based on how badly they harm humans, and stated that he thought alcohol and tobacco were worse than LSD, ecstasy, and marijuana. It's debatable whether these views themselves were responsible for his dismissal; then-Home Secretary Alan Johnson wrote in a letter published in The Guardian that Nutt was actually asked to leave “because he cannot be both a government adviser and a campaigner against government policy. This principle is well understood and long established.” Nutt himself wrote in The Sunday Times, however, that he “gave a lecture on the assessment of drug harms and how these relate to legislation controlling drugs” — was fired because “some contents of this lecture meant I had crossed the line from science to policy.” He maintained that he “[did] not know which comments were beyond the line or, indeed, where the line was.”

But I digress. Again, Nutt is still acknowledged as a solid scientist, and as we can see through these two potential booze breakthroughs, he's certainly been busy since he left the government. Unfortunately, though, we might not be able to experience the fruits of his labor for quite some time. Although Wired reported in 2013 that “[alcosynth] might be on sale within two years,” this (obviously, since it's now 2015) ended up not being the case; the new time line for both drugs as of January according to The Telegraph is between three and five years — if, Nutt noted, they're even able to pass the UK's strict drug laws in the first place. Both would be marketed at high-end cocktail bars to start; the chaperone pill would likely be pretty expensive; alcosynth, however, would be relatively affordable.

I'll be honest: Part of me looks at all this and goes, “Sounds great!… But what's the catch?” Because there has to be a catch, right? I mean, are we all going to gonzo with these two things and wind up in an Oryx and Crake -style BlyssPlus situation? Not that I think Nutt has designs of the same sort that Crake did, but, well… maybe reading too much post-apocalyptic fiction has made me unhealthily skeptical of our own cleverness. I do have to admit that being able to get the fun bits of drinking without needing to go through the awful bits too would be pretty nice. Fingers crossed, right?