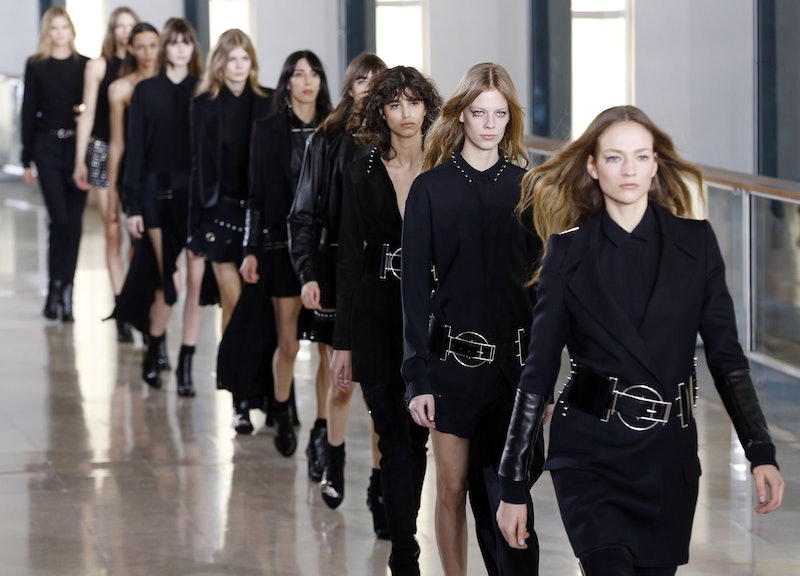 It appears that Independence Day has come five months early — and in France, no less — if the Paris Fashion Week runways are to be believed. Designer Anthony Vaccarello's Fall 2015 collection was star-spangled, western, and unexpectedly urbane for a European designer, but then again, who hasn't played with the John Wayne trend lately? Though the collection was rendered only in shades of brown and black, the studded, sueded, and belted ensembles were an amalgamation of deliberately elaborate style statements.

Style.com notes that Vaccarello's newfound obsession with Americana may well have stemmed from the designer's recent sojourn to the United States, and if several weeks of immersion created this collection, I sincerely hope Vaccarello takes up semi-permanent residence stateside. Instead of reaching for the western hero trope, Vaccarello focused his attention on the antagonist, combining the collection's inky shades with edgy leather, rebellious metal stars, and so many studs the presentation appeared to shimmer.

The designer amped up his deviance quotient with slit origami skirts and strategic slivers of skin, creating the illusion of a very tough team of rebels somehow seeking to reinforce patriotic spirit in the audience. Unlike Ralph Lauren or Chanel's more literal western collections of seasons past, Vaccarello's collection was highly experimental and as a result, highly amusing. Who doesn't enjoy a star-studded ensemble now and then? Thanks to Vaccarello's latest collection, it appears that the world will be celebrating the Fourth Of July well into October this year.

Spangled Stars On The Runway

Feminine Fringe On The Fall 2015 Runway