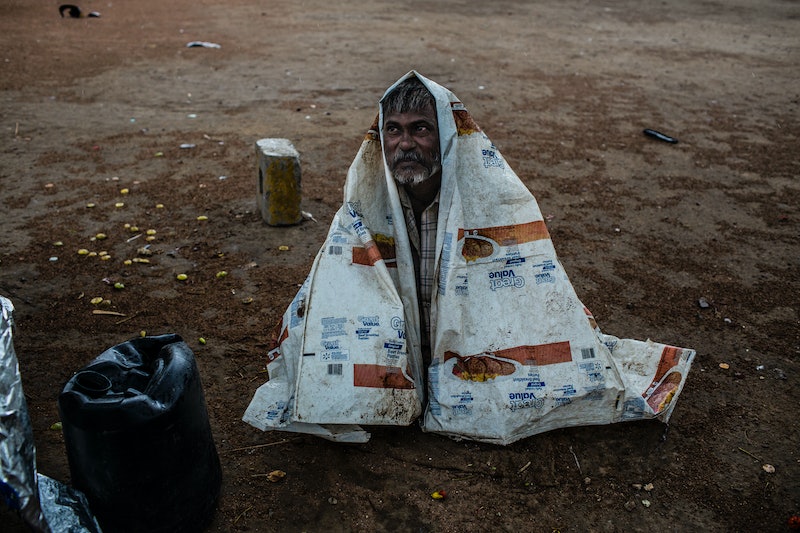 Hundreds of thousands of people have been forced to flee from their homes in high-risk areas of India Saturday, as tropical Cyclone Phailin — compared to the devastating Hurricane Katrina — makes its 20-km-per-hour approach to the country, expected to hit near the states of Odisha and Andhra Pradesh Saturday evening. The impending weather disaster has caused so much concern that even Google has volunteered its help, setting up a Crisis Response team to help authorities find and rescue cyclone victims.

Authorities, who are predicting a storm surge as high as 10 feet — enough to fully submerge certain areas of Odisha and Andhra Pradesh — are taking no chances, making people leave their homes whether they want to or not. Roughly 500,000 people have been evacuated so far, the country's National Disaster Management Authority vice-chairman said Saturday afternoon, and at least seven storm-related deaths have already been reported in Odisha. The state, which has a population of nearly 42 million, is mainly agricultural and will be really hard-hit by the storm.

"We have taken a zero-casualty approach," said the Odisha state disaster manager. "If people do not move, force will be used to evacuate them."

Military units have become involved, and 20 medical teams have also been flown in to the region to help prepare for the storm (which the London-based Tropical Storm Risk has classed as a Category 5 — the highest category possible). Even web giant Google has voluntarily set up a "Person Finder" software to help locate people who get swept up by the cyclone and separated from their families, and is looking into the possibility of using Airtel to send an text to all users warning them about the storm.

"Google has come forward to offer their help. We are coordinating with them. It will help us collect information concerning the victims of the cyclone and track their status," said the Andhra Pradesh minister for Information Technology and Communications.

The area has seen some of the deadliest storms in recent history, and many are scared of a repeat of October 1999's disaster, when the Odisha Cyclone — which is roughly the same strength as Cyclone Phailin — hit the area, killing over 10,000 people.