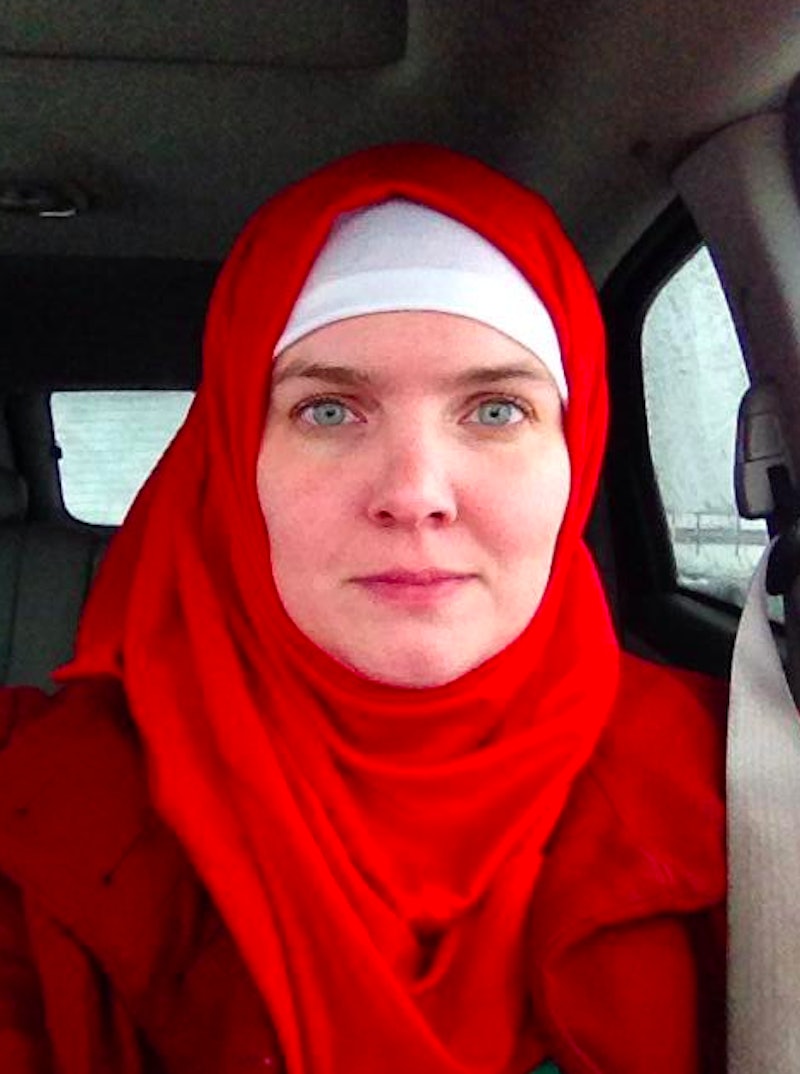 I personally find it very hard sometimes to say negative things about seemingly sweet and well-meaning people when they do... let's call it problematic things; sometimes, though, there's really no avoiding it. Take, for instance, the Christian woman who is wearing a hijab for Lent and who seems to be toying with the idea of adding brownface to the mix. Because her motives seem sincere and noble and all that, but... yeah. Hijab. Brownface. Cultural appropriation.

Jessey Eagan first decided to wear a hijab for the forty days of Lent as a way to remind herself "what it feels like to be an outsider." She ran the idea past a hijabi Muslim friend of hers who gave her an enthusiastic go ahead. Her intention seems to be part personal growth and reflection and part interest in maybe shaking up the way people in her Christian community see hijabs — none of which is in itself a bad thing. Furthermore, it certainly isn't Eagan's fault that people tend to pay more attention to white women donning the hijab as an experiment than to the voices of real, live, Muslim women talking about what it's like and what it means to them.

And yet there are some things about this experiment that just aren't as positive or meaningful as Eagan clearly wants them to be. For one thing, there's the fact that she seems to be celebrating the tiniest of changes in people's perceptions overly much, such as the woman at Eagan's church who told her that thanks to Eagan's blog, she had made eye contact with a Muslim woman that otherwise she would have avoided looking at. "How great is that?" she said. "Such a small gesture for her to make, and at the same time it was a huge step for her."

As Jia Tolentino at Jezebel responds, "How great is that? By which I mean: how great is that? A Christian lady made eye contact with a Muslim lady — as if the two were equals, even." And yet Eagan doesn't really discuss the problematic attitudes that underlay this change, or say that such steps are unacceptably small when we're talking about creating true human empathy. She doesn't talk about how awful it is that people stereotype Muslim Americans. She also seems to think that being Muslim in America is somehow comparable to living abroad in Jordan as a blonde, blue-eyed white woman (which she apparently did, seven years ago). She even criticizes herself for "stereotyping" white people out of a concern for her own safety, which is just about the opposite of helpful when it comes to talking about issues Muslim Americans face, especially in a time when hate crimes against Muslim Americans are on the rise.

But Eagan doesn't talk about that, either. Surprisingly, searching for mention of the Chapel Hill shooting, which claimed the lives of three Muslim American students less than two weeks before Eagan donned her hijab turns up nothing. Indeed, her blog has apparently no mention of Islam prior to announcing this project — though to be fair, the blog is not usually regularly updated. Still, as far as using this experiment as platform to talk about under-discussed problems, Eagan doesn't seem to be doing much. She occasionally talks in the blog about educating friends or family about Muslim issues, but she doesn't use the blog to discuss, say, widespread Islamophobia or the systemic issues facing the Muslim community. Instead, she acts as though instances of people overcoming minuscule amounts of personal prejudice in order to achieve something resembling a baseline acceptable lack of bigotry is a victory.

And even more disturbingly, she tells BuzzFeed that she's thinking of using makeup to "darken" her skin tone because she knows that Muslims of color have a very different experience than white Muslims. This is true, and it's definitely another part of the larger conversation we need to be having — but it is not a good reason to don blackface or brownface. There is never a good reason for blackface or brownface. They are inherently terrible ideas. Though since she is a white person with dreads, this might not be so very surprising.

Overall, Eagan's efforts seem to be very sincere and thoughtful; she obviously wants these 40 days to be meaningful, and I don't want these critiques to come across as needlessly bashing her effort. But I tend to get fundamentally uncomfortable whenever people start "trying out" culturally significant practices or identity markers, especially since the larger society tends to pay far more attention to their interpretation of what those things mean to them than to the people from the marginalized groups in question. It's really just not the best way to be an ally.

In short, I believe that Eagan really wants to do good with this experiment, and I do hope that some good does come out of it. But I also hope that people stop trying this stuff out. If you want to reflect on being an outsider, there are other ways to do it — ways that don't involve cultural appropriation. And if you want to increase compassion in your community, there are better ways to do it. Try those instead.