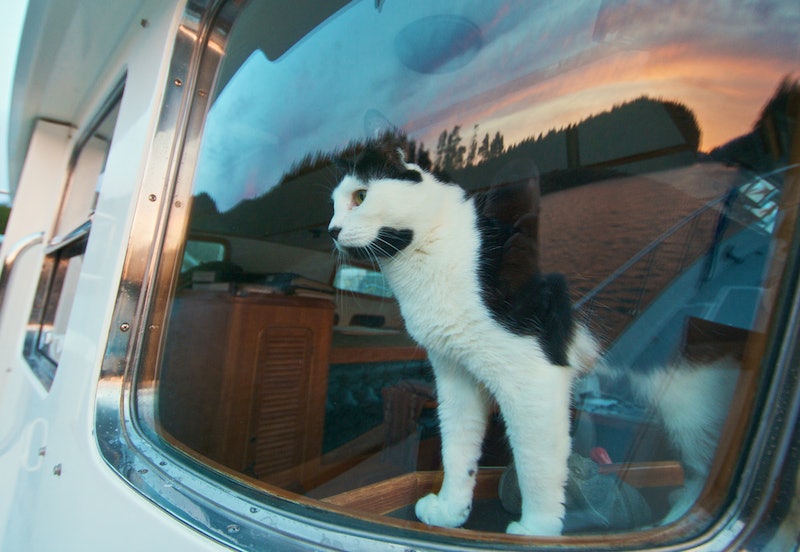 Heaven is for real, and it’s an island in Aoshima, Japan where cats outnumber people six-to-one. You’ve likely seen the videos on your Facebook feed by now of cats in droves roaming the streets in their general disaffected manner. For every one of you, there are six cats who DGAF you exist; even so, though, they will purr their way into your hearts in order to manipulate your emotions as they see fit, adorable assholes as they are.

Aoshima isn’t the only one of its kind, and certainly not in Japan, where cat islands flourish. According to Quartz, it boasts a total of eleven feline-overrun islands. “Some are even semi-urban,” they write, “on an island off the coast of Tokyo, the feral cats coexist with surfers and sunbathers.” “Coexist” is probably less appropriate than “tolerate,” but we’ll take it.

But there’s a whole animal kingdom out there, gang, and a lot of islands to boot. Somewhere on this great big beach ball we call Earth exists a remote corner with a concentrated number of all of your favorite creatures (and some of your not-so-favorite ones). So below, we’ve put together a list of “honorable mentions” for your reference.

Please look at these lil’ babes living the actual dream on the Bahamian archipelago of Exuma. “It is thought that long ago there was a group of sailors that dropped the pigs off on the island, thinking they would make a good food source,” reports the Huffington Post. Supposedly the sailors never returned, so piglets now coexist with island visitors as they both vie for a plot of beach to catch some rays.

This treasure is located in Ōkunoshima, Japan, where the Daily Dot reports, “The rabbits on the island are considerably tame and known to approach humans in droves, especially at feeding time.” Evidently they’re likely to chase you too, as evidenced by the above video wrought of your dreams.

Okay, so maybe this one isn't an island — but it's certainly another of Japan’s many treasures. At Miyagi Zao Fox Village, over 100 foxes populate a mountain sanctuary. According to ABC, you can interact with and even feed them for less than $10 (U.S. currency).

Cayo Santiago off the coast of Puerto Rico is home to hundreds (around 800, reports Slate) of Rhesus monkeys. Unfortunately you can’t actually set foot on this monkey paradise (er, maybe not the correct term?), as “Rhesus monkeys may carry Herpes B, a virus that can be fatal to humans.” But you can apparently kayak to the island so long as you stay 30 feet away from its perimeters.

Primates, the remix: All of the 101 species of lemurs in the world are located exclusively in Madagascar, but climate change is threatening their already endangered existence. So if there’s any other reason you needed to being more mindful of the way we’re treating our planet, please look to these little guys for inspiration.

It had to be done. Assateague Island is split off the shore of Virginia and Maryland state lines, a land area maintained by the The National Park Service, and is home to over 100 wild horses. “Local folklore describes the Assateague horses as survivors of a shipwreck off the Virginia coast,” reports the NPS website, but there’s no actual proof that that’s how they got there. However they got there, take advantage of a very rare opportunity to view wild ponies in the United States.

Puffins are undoubtedly among the world’s most adorable species of birds. Off the coast of Anglesey, Wales exists the aptly titled Puffin Island, where the birds live on a designated Special Protection Area, reports BBC. But don’t expect to see them in droves, they add, “as the puffins from which the island gets its name were decimated by the accidental introduction of rats in the late 19th century.” For more on an unofficial rat island, please click here.

8. Spider and Snake (aka Nightmare) Island

In Guam, horrific spiders and snakes are taking over what used to be a mostly bird-dominated island. Unless you’re an enthusiast of nightmare fuel, don’t go here. Just...don’t.

More like this
Craving The Beach? Here's Your Guide To A Solo Vacation In Turks & Caicos
By Alexis Morillo
The 5 Best Cat Trackers
By Megan Gray
The 9 Best Duvet Covers For Dog Hair
By Claire Epting
The 8 Best Dog-Proof Litter Boxes
By Lauren Moison
Get Even More From Bustle — Sign Up For The Newsletter