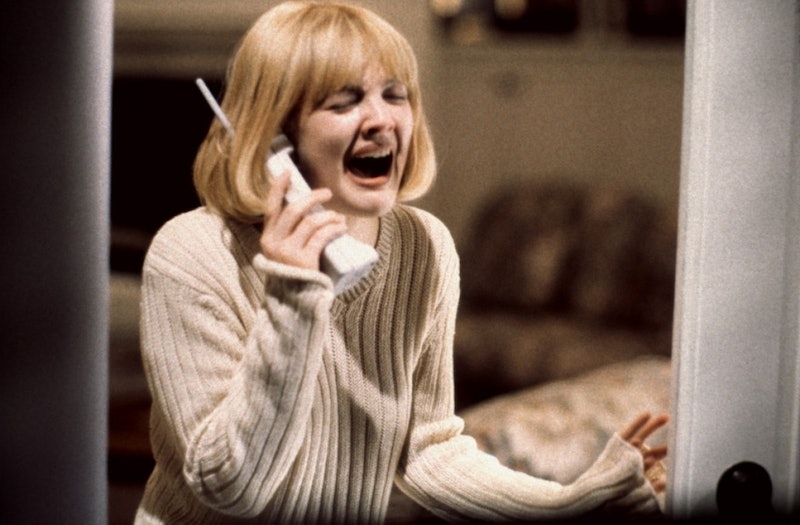 It is a truth universally acknowledged that voicemail is horrible and nothing good can ever come of checking it. Coca-Cola recently removed the voicemail system from its corporate office; fewer people check their personal voicemail each year; and we've all acknowledged that leaving and checking voicemail is anxiety-provoking. And yet still, our phones come with a voicemail option, and the world still comes with maniacs who want to utilize it.

I was reminded of that this afternoon, when I foolishly checked my voicemail for the first time in 2015. It took over 15 minutes to sort through the messages, which were comprised of hang ups (80%), robo-calls about fake credit cards (15%), and one from a random guy who claimed to be from the IRS. To make a long voicemail horror story short, I called the guy back, he was definitely not with the IRS, and when I pointed this out, he called me some names that are not appropriate to reprint on a wholesome family website like this (but they may have rhymed with "mother trucker with a smelly DeBussy").

It was one of the more unusual personal encounters I've had in the recent past, and yet, it made perfect sense to me as the logical outcome of actually checking a voicemail. Though voicemail apologists refuse to admit it, this is what life with voicemail is like: nothing but annoyance, confusion, intrusion, miscommunication, and the occasional stranger cussing about your reproductive organs. So why do we continue to allow voicemail to terrorize us, long after most of us have agreed that it's outlived its usefulness? Read on and discover the five ways that voicemail totally makes your life worse.

1. Every new voicemail you receive is an exercise in terror

Oh my god! Why do I have a new voicemail? Oh god, did Nana Gretchen die?! Well, I hate to say it, but if Nana Gretchen died, someone would probably text you. Your parents like to play dumb about texting, but they, like most other people on earth, know how to best reach you in an emergency — and the answer is not "by using a technology that I know my child goes months at a time without acknowledging."

2. You feel guilty about never checking your voicemail inbox

Even though you know that your voicemails — which are all from totally random numbers — contain no information actually relevant to your life, there's a tug of guilt, a fear that you're somehow being selfish by not listening to your voicemails, and that you will somehow be punished for this. What if someone is trying to reach you to...give you a job? And they've been living in a concrete bunker deep below the earth's surface for the past decade, and don't know that there are multiple methods of communication now that are considered preferable to random phone calls? I mean, IT COULD HAPPEN, RIGHT? (no, it can't, and it won't, and all those voicemails are from your college, asking you to make a donation).

3. Your unlistened-to messages create rifts between you and your older relatives

Your parents were raised in an era when not replying to someone's phone calls meant you were mad at them. You were raised in an era when calling someone meant that you were mad at them. Mix these two sensibilities together, and you have a powder keg. Voicemail leads to multiple generations feuding over a three-minute long message your mom left about a sweater she thought you might like. How is this worth it?

4. The only non-relatives who leave voicemails are jerks and scam artists

With voicemail mostly a thing of the past, your phone's inbox has become the aural equivalent of the Wild West — a lawless no man's land dominated by con artists, phone surveyors, and other folks looking to waste your time or money (and also, apparently, Justin Bieber). You may have made every right choice in your life and done everything you can to insulate yourself from weird predatory fake credit card companies, but as long as there is voicemail, they'll have a pipeline directly to you — and your poor Nana Gretchen, who is still alive and kickin', and might get confused enough to give them her real credit card number!

Also, just as a heads up, if the IRS ever does want to contact you, they'll send you a letter first before calling. Make sure to tell your Nana.

5. Your few friends who do leave voicemails are self-righteous about it

Perhaps you have one friend who is still into voicemails, because they're more "authentic" than texts. She's your friend who also loves to go to parties and talk about how she deactivated her Facebook account. She might even be your friend who runs an Etsy store selling items with little whimsical drawings of typewriters on them. Either way, since voicemail is still considered part of the standard communication arsenal — instead of being resigned to the annals of history along with the telegram, the fax machine and the MySpace message — these deranged voicemail-loving few hold power over the voicemail-hating many, leaving voicemails that we are then forced to listen to.

We need to fight back. We need to assert ourselves against those who claim texting is "impersonal" or that they "don't like the tiny keyboards." You know what I don't like? That blinking voicemail icon, haunting my nightmares for days until I finally give in, wade through 30 hang-up calls, and get to the voicemail you left me a week ago right before we had dinner, to say "running 10 minutes late to dinner!" Listening to that voicemail was a thousand times worse than sitting around for 10 minutes at dinner, not knowing what was going on! We need to rise up and say a bold, uniform "no" to voicemail. It's the only way to maintain our sanity, protect our nanas, and ensure that the only people who scream sexualized insults at us are mean teenagers or people we cut off in traffic. It's the least we deserve.