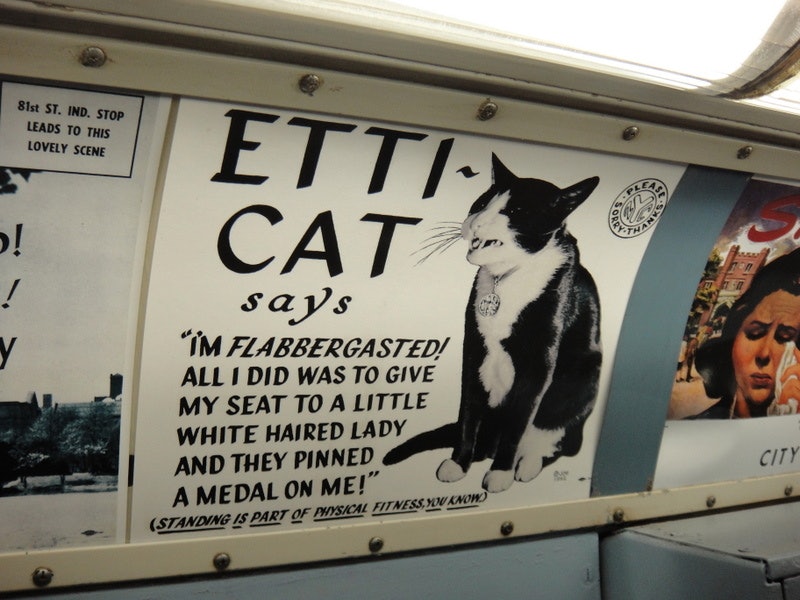 As much as I appreciate the thought behind the MTA's current subway etiquette campaign, I can't help but notice that it… well… may not actually be working that well. Maybe if they bring back Etti-Cat, the subway etiquette mascot from the '60s, they'd have more luck. What's that? You haven't heard of Etti-Cat? Take a seat, my friends; you're in for quite a treat.

Gothamist recently unearthed this spectacular piece of subway history via the New York Times' Time Machine archive, and you have no idea how delighted I am that they did. On June 26, 1962, a small item appeared in the Times announcing the introduction of this prim and proper feline: “A photograph of a cat named Etti-Cat will soon appear in about 3,000 of the Transit Authority's 6,500 subway cars,” the article read. “Etiquette — pardon, Etti-Cat — is portrayed as a most polite creature advocating the authority's campaign for courtesy.” His goal was to lead by example the hasty, impolite riders of the subway to pleasant and civilized behavior. Sort of a “proto-LOLcat” (in the words of BuzzFeed), he taught such valuable lessons as giving up your seat to people who need it more than you do:

“Stepping lively,” which I interpret to mean “Don't dawdle — you're holding up everyone else”:

And — perhaps most importantly — apologizing if you do something rude:

Awwww. Look how ashamed he is. It's OK, Etti-Cat. I accept your apology.

The posters were apparently “calculated to discourage the defacement of walls and posters,” and, well… I'm willing to bet they worked. I mean, just look at this little guy. What kind of monster would want to destroy his furry, adorable face? Etti-Cat was so popular he even penned (pawed? I'm sorry — I'm so sorry) an etiquette book addressing situations outside of his regular subterranean territory — although alas, it's currently out of print. Curses!

But the big question, of course, is this: Was Etti-Cat actually real? When asked about the mascot's status as a living, breathing fur ball, a spokesperson for the Transit Authority had this to say to the NY Times: “Charles L. Patterson, T.A. Chairman, indicated that if Etti-Cat is adopted by the public he will hold a news conference for the pet so that riders can learn more about the new subway mascot.” Alas, I was unable to determine whether or not this news conference ever actually happened — but I really, really hope it did. Because that is hilarious.

While Etti-Cat's fabulous courtesy ads may no longer be entertaining and educating us along our daily commute, at least you can still visit them at the New York Transit Museum (which, by the way, is super cool. Seriously. Even if you skip Etti-Cat, it's worth it for all the other neat stuff they have there, like old subway cars you can actually walk around inside); there's even a special after-hours event occurring on Tuesday, March 10 about subway etiquette then and now. Oh, and there's also this: As of 2012, there was a cat that looks suspiciously like Etti-Cat: The Next Generation living at the Transit Museum. I have no idea if it's still there now, but I sincerely hope it is. Etti-Cat lives!