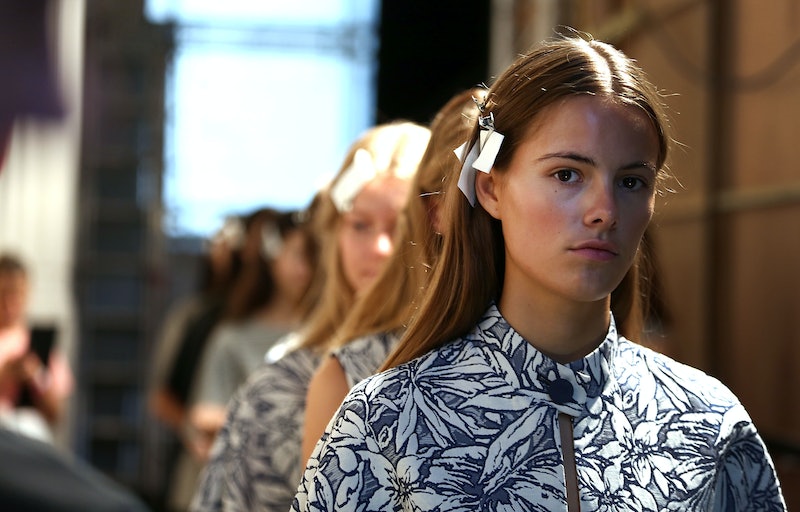 I imagine the life of a runway model: flying on private jets, weekending in Paris and Milan, wearing the best clothes, being declared the muse of iconic designers, and buying flats in every city with all my earnings. But with a dose of reality, my daydream becomes a nightmare: the pretty lights of fame dim to a much darker reality. According to Mashable, runway models endure grueling hours, poverty-level wages, sexual abuse and assault, degradation and everything short of slavery.

Peeling back the outerwear of the fashion industry reveals a lot of dirty laundry. The truth is that models face poor working environments on the daily, and it's the medieval standard across an otherwise conscious industry. Fashion has never been more socially, economically, or environmentally aware. Thanks to socially conscious, consumer-friendly shopping sites like Olivia Wilde’s Conscious Commerce, Amber Valetta’s fashion-focused Master and Muse, one-for-one centered Tom’s Marketplace, and Jessica Alba’s home and baby products at The Honest Company, consumers have a new standard for where, why, and how their products are sourced.

So why is the modeling industry still characterized by seedy, abusive, and low-paying working environments?

According to the Bureau of Labor Statistics, the average annual wage of today's model is $26,000, which is above the poverty level for a single person (about $12,000 annually), but still, is a far cry from lavish living. And worse? Models are often unprotected in the workplace under federal law. Let me explain.

According to a survey of working models performed by The Model Alliance, 54.7 percent of models began between the ages of 13 and 16. In that same survey, 64 percent reported being asked to lose weight by their agency. As for sexual harassment, 30 percent of models reported inappropriate touching on the job, and 28 percent reported being pressured to have sex with someone at work, according to Mashable.

The MA and similar organizations, like Stand Up For Fashion (STUFF), are blowing the whistle on model working conditions. So far, the biggest victory has been convincing New York lawmakers to protect child models under its child labor laws. Until November 2013, children had no protection in the workplace.Thanks to a bill sponsored by New York state senators Jeffrey Klein and Diane Savino, a new law is in place, restricting working hours for underage models, requiring them to have a valid Child Performer Permit, and enforcing agencies to provide a chaperone for any model under 16.

It's a big win, but not everyone in the industry is on board with progress. According to Mashable, the Council of Fashion Designers of America (CFDA) made a request for designers not to use underage models during 2012 New York Fashion Week. Designer Marc Jacobs disregarded the request and hired two models rumored to be 14 or 15 for his Fall 2013 show. “I do the show the way I think it should be,” Jacobs told New York Times , “If their parents are willing to let them do a show, I don’t see any reason that it should be me who tells them that they can’t.”

Isn't there a saying about "injustice anywhere" is a "threat to justice everywhere?" Yeah...child models line the pockets of designers like Marc Jacobs. To hire older, better paid workers would be an immediate threat to a brand's bottom line. Jacobs' flippant reaction is not the first, or last, of its kind in relation to hiring child workers.

MA founder Sara Ziff told Mashable, “Some individual agents and designers have been supportive, but our success [with the child labor law] seems to have caused some industry leaders to take notice and to try to marginalize our efforts.”

Thankfully, MA and STUFF are unionizing to form a collective voice for models, allowing their rights to be heard without fear of dismissals from designers. We can only hope their work resonates within the industry, and allows models the humanitarian rights already afforded to the designers they work for.

Ziff also pointed out that U.S. models are often considered independent contracts, and therefore unable to sue employers for sexual harassment under federal law. Child models, working without adequate pay, representation, and protection —this is the face of fashion, ladies and gentleman.