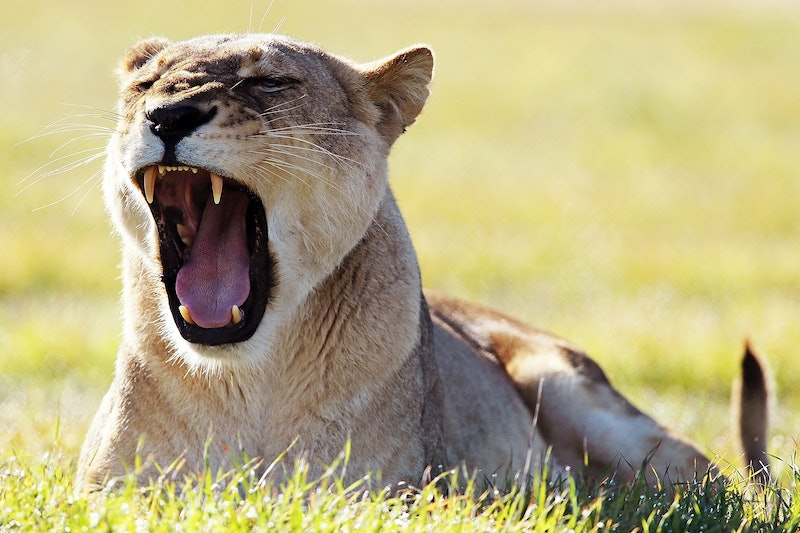 "Hey, so we went on a safari in South Africa and we were driving along and there was a pride of lions just sort of lounging around in the sun so of course we slowed down to look at them and then one came right up to the car! It was so cute! And then, yeah, so THEN the lioness OPENED THE DOOR WITH HER TEETH."

I'm sorry, darling adventurers, but why on earth would you go on safari and drive through a live game reserve but not lock your doors? I mean, I guess I can understand the thoughtless assumption that wild animals aren't up enough on their fine motor skills to open car doors, but clearly this is a wrong and dangerous assumption to make. This group of merry adventurers apparently made this mistake, while simultaneously looking tasty to one of the lionesses they were passing. Either that, or she just wanted a ride to get away from the rest of her family. We've all been there.

Joshua Sutherland, who posted the video to YouTube, said he and his sisters were on a mission in South Africa visiting their parents, when they had "an experience of a lifetime." Dude. You almost became an afternoon snack for a giant predator because you didn't lock your car door. Maybe "experience of a lifetime" falls a little short of describing what happened here.

It's like we've learned nothing from Jurassic Park. Remember the velociraptors in the kitchen? Let me refresh your memory: The two annoying kids who had already come face-to-face with a tyrannosaurus thought they would be safe in the kitchen. They were all, sure, let's just close the door and those stupid raptors can't get in, because we are far more intelligent humans. Except they did get in, and their appetites were already whetted from devouring the Crocodile Dundee safari guy just outside.

According to National Geographic, lions are intimidating animals (ya think?) who will chase off any creature that invades their personal space. I'd say it's lucky there were no cubs with this pride, because if the mama lions felt their babies were in danger from the traveling Sutherlands, this video could've gone in a whole other direction. Female lions are the hunters, and they work in teams to hunt their prey. Or, you know, when they want to carjack you.

So the moral of the story kids, is brush your teeth, fasten your seatbelts, look both ways when crossing the street, and for the love of all that is right with the world, lock your car doors when you are passing through the hunting grounds of a predatory animal.