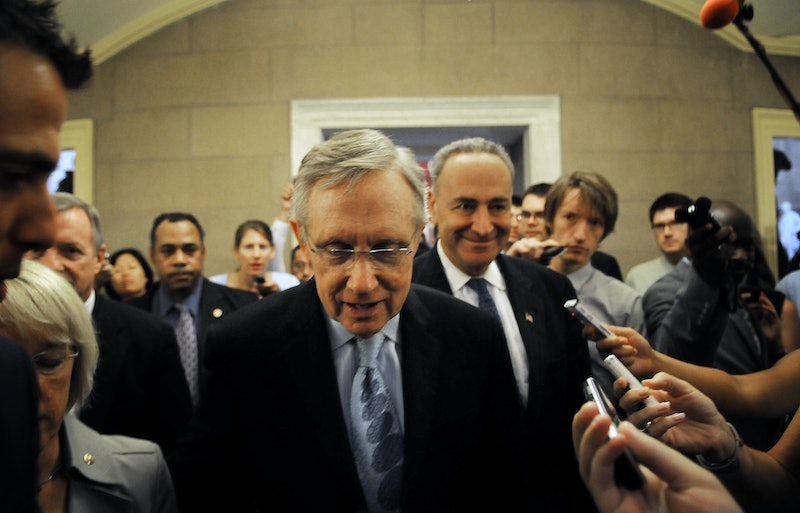 Senators Harry Reid and Mitch McConnell met Sunday in an attempt to broker an agreement that would end the government shutdown and raise the debt cap before Thursday — when the country will literally start running out of the money needed to pay its bills — but produced no immediate sign of progress, worrying global leaders despite assurances from the Senators that a deal can and would be reached.

As Senate leaders took a stab at negotiating the fiscal crisis, Republicans continued to blame President Obama for his unwillingness to discuss possible concessions. “This is the first time in history that a president of the United States has said, ‘Look, I’m not even going to talk about it,’ ” said Republican Senator Rob Portman, adding: “The president should engage. You’ve got to deal with the underlying problem, which is the spending problem.”

"We should be sitting down," echoed Sen. John McCain. "And the president should be engaged. And the Democrats, they better understand something. What goes around comes around. And if they try to humiliate Republicans, things change in American politics. And I know what it's like to be in the majority and in the minority. And it won't be forgotten. Now's the time to be magnanimous and sit down and get this thing done."

Republicans have been using the threat of extending the shutdown and defaulting on the government's debt to demand spending cuts and a deficit reduction. They've also been using the impending fiscal crisis to try and curtail parts of the Affordable Care Act — but President Obama has maintained that both measures should go through Congress unconditionally, and would only agree to deficit reduction negotiations afterward.

“The shutdown will be old news next year,” said Sen. Lindsey Graham. “Obamacare’s faults will be front and center in 2014 if we don’t screw this up.”

In spite of the pessimism being thrown around the Senate, Majority Leader Harry Reid seemed sure that discussions between himself and Sen. Mitch McConnell, R-Ky, would reach a compromise.

"Americans want Congress to do its job. … That's all they're asking us to do," Reid said. "I'm confident and hopeful that will be accomplished."

Leaders at the World Bank and International Monetary Fund convened on Sunday in a meeting which was dominated by talks of the U.S.'s impending possible fiscal disaster, and called on the Congress to raise the debt cap and end the shutdown — or else.

“One thing we’re certain around the table, it was that if there is that degree of disruption, that lack of certainty, that lack of trust in the U.S. signature, it would mean massive disruption the world over,” said Christine Lagarde, the fund’s managing director. “And we would be at risk of tipping yet again into a recession. That was the impression around that big table.”

If Senators fail, as the House did, to draft an agreement by October 17, the country will run out of its borrowing authority and risk defaulting on it $16.7 trillion debt. Although after that the U.S. will still have roughly $30 billion in cash, it's likely that by October 22, the government won't be able to pay most of its bills, even benefits and salaries.