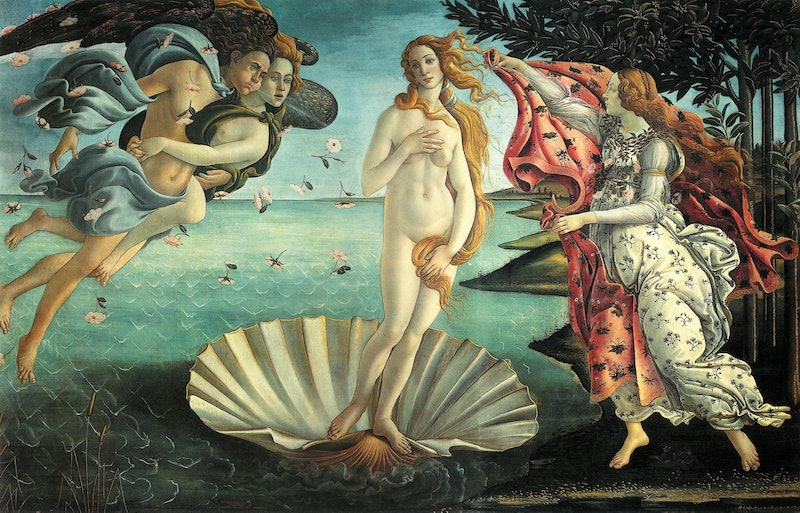 The truth of its absence from art is actually a bit more prosaic — but even without showing up in paintings, pubic hair has had a very weird and misunderstood ride.

To be honest, the real reason that pubic hair didn't show up in old paintings or statues is the same reason it doesn't show up in today's pornography: Ladies shaved. And waxed, and concocted depilatory creams, and all manner of hair removal devices for their "female hairs." We have evidence of this from the Greeks, the Romans and the Egyptians, and even have some intimate hair removal recipes from the Renaissance, including quicklime and arsenic. (Tasty.)

"Anything goes" most certainly did not go. And even in the eras where pubic hair was in fashion, like in the Middle Ages, artists still looked back to the Renaissance and Greek ideals of nudity for their art — which meant no hairs below the waist.

It wasn't all about idealizing bare ladies, though. Pubic hair has carried some particularly odd associations over the years: it's been seen to do everything from grow serpents in dung-hills to make you prone to lechery. Here are eight of the most ridiculous myths about pubic hair throughout history.

Myth #1: Pubic hair can turn into serpents and wicked monsters when a woman is menstruating.

This particular medieval recipe for mayhem comes from a commentary on the De Secretis Mulerium , a text from the Middle Ages literally meaning "Women's Secrets," which has the charming warning that the pubic hair from a menstruating woman will turn into a serpent if you bury it in fertile earth and heat it up a bit. Lest you think this is an isolated incident, another text has it too, only the result is "wicked venomous beasts." It's literally monstrous compost.

Myth #2: The hairier the woman, the more likely she is to bear twins.

The confused link between sexiness, fertility, and pubic hair in the early modern period resulted in some pretty weird ideas. The most basic equation was, the more pubic hair, the more babies you'll have — in one go. Italian physician Giovanni Marinello declared in 1563 that women with lots of pubes were much more likely to produce twins or triplets. (He was writing this in a book for ladies, too.)

Myth #3: It will keep you faithful — if it's kept in a bottle above your door.

A compendium of folk magic from rural Illinois in the 1930s reveals a very peculiar use for a lady's pubic hair: being used as a charm to keep the owner from being unfaithful to their male partner. The idea? Get a bit of her pubic hair, plus some of her menstrual blood — the two were often combined in recipes like this, because they were seen as vaguely interrelated — and put it in a bottle over her door.

Myth #4: The hairier a woman, the more lecherous she makes men.

Pubic hair has a tie to fertility and sexual potency in a lot of cultures — Chinese men are still advised traditionally not to marry women without pubic hair, because they may be infertile — but it still frightened the bejesus out of some people.

Levinus Lemnius, a 16th century Dutch author, voiced the thought that "such women be as greatly desirous of carnal lust ... the more lecherous, the more hairy." So if you've got bushes and bushes, you're likely going to leap on people in carnal frenzies.

Myth #5: The more pubic hair, the more modest the woman.

Just when you thought you were getting a handle on this pubic superstition business: rather than make you more sexual and uncontrollable, the famous Greek surgeon Galen thought that an excess of it would keep a woman modest, by providing a covering, rather like a veil for one's head. This idea came from a general belief, touted by Pliny The Elder, that women were more innately modest than men.

Pubic hair has been a powerful part of love potions in many societies, particularly in medieval and Renaissance Europe. It was put in potions with honey, mead, mandrake root, and rose petals, and served to the object of your desire. If that worked, lovers would proudly wear their ladies' pubic hairs on their sleeves — or in their hats; there's a persistent rumor that soldiers wore curls of pubic hair on their helmets as a favor. (In World War II, some soldiers apparently wore it on badges.)

Myth #7: It's where the Devil conceals his mark.

If you've ever studied the Salem Witch Trials, you'll know that witches, during the massive hysterical witch hunts in early modern Europe and America, were supposed to be the Devil's servants, and that the Devil left a "mark" on them to show it. Said marks could, conveniently, be anything from moles to boils — but the doctrine of the time said that they'd probably be under the pubic hair. Because it was so lascivious and sexy, you see. So a lot of "witches" endured unwanted shavings on top of everything else.

In the school of medicine that most of the Western world used for centuries, peoples' temperatures were determined by their combination of the four "humors" in their bodies, and men were hot and dry, while women were cold and wet. Some scholars in the Middle Ages made confused allegations that female pubic hair was just the female body trying to "rid itself" of excess cold and dampness by excreting it as fuzziness. Yep.

More like this
11 Massage Oil Candles, Body Creams, & More Steamy Essentials For Cuffing Season
By Olivia Rose Ferreiro
How To Get Celeb-Approved ’90s Brows
By Danielle Sinay
Tilda Swinton’s Neon Yellow Hair Is More Than A Style Statement
By Justine Knight
This Week’s New Makeup Releases & More Beauty Headlines
By Audrey Noble and Erin Stovall
Get Even More From Bustle — Sign Up For The Newsletter