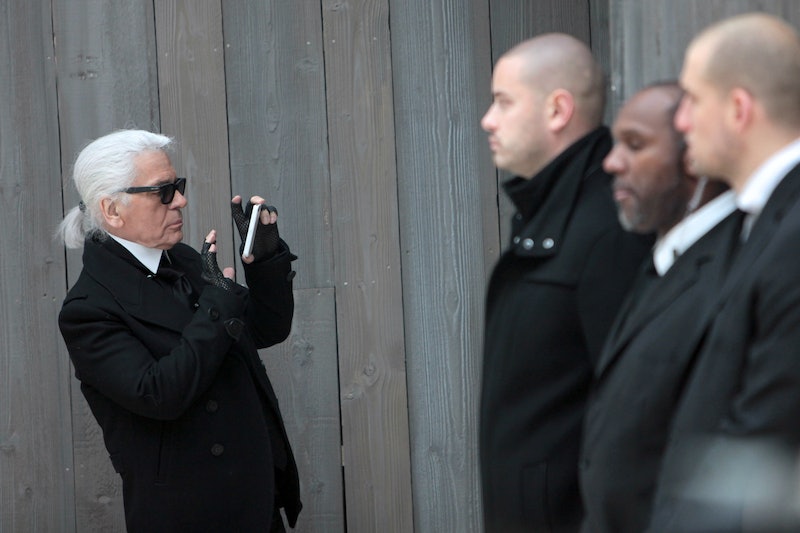 Fashion is all about the dos and don'ts. Do celebrate your size. Don't overly tan. Do stay ahead on top of the trends. Don't let it all hang out. Do, don't, do, don't. It's exhausting. There are many things Chanel's adored Karl Lagerfeld just doesn't do. But the main thing? Karl Lagerfeld doesn't do selfies.

Not convinced? Try to ask him to take one, if you somehow miraculously run into the silver-haired, fingerless gloved one on the street, and see what happens. His assistant might swat you, so lookout. In his brutally honest interview with The New York Times, Lagerfeld, who also designs for Fendi, confirmed that his assistant will shut you down if you dare attempt a photo opp.

You have a better chance of posing with his infamous cat Choupette. In fact, Lagerfeld is actually just fine with his feline being more visible than he is.

And no, Karl is not being koy!

He stated, "We live in the world of selfies. I don't do selfies. But other people do, and they all want to do selfies with me. No, no, no. Thank God, Sébastien, my assistant, he’s mean to the people in the street, mean and rude. I'm a nice person."

How cute! Karl lets Sébastien do his dirty work. Can you see it? Karl, all fab, cloaked in black, with Choupette tucked under his arm, while Sébastien holds up his palm, halting potential selfie seekers.

This, this is why I would still attempt a selfie with Karl. Since he is nice and because I'd want the chance to set Sébastien off.

But besides selfies, what else doesn't Karl Lagerfeld do?

Lagerfeld hopes Choupette's fame eclipses his so "then [he] can disappear behind Choupette."

K. Lagerfeld is not anti-fur by any means, because duh, but he doesn't eschew animal sympathizers and anti-fur crusaders, either. His argument here is a bit questionable, but hey! At least he has a soul.

"I'm very sympathetic," he told The Times. "I hate the idea of killing animals in a horrible way, but I think all that improved a lot. I think a butcher shop is even worse. It's like visiting a murder. It's horrible, no? So I prefer not to know it." I'll let PETA respond to that one.

3. Think Fashion Needs To Be Humorless

Fashion is a serious pursuit, and a photo of Lagerfeld flashing his pearly whites is nearly impossible to find. But does it need to be… humorless? Lagerfeld doesn't think so, saying, "I don't think that most of the designers have a very quick sense of humor. They take themselves very seriously because they want to be taken as artists."

He does hope his sense of humor is well-taken, though!

Artists? No. Artisans? Yes. "I think we are artisans. It's an applied art. There's nothing bad about that. If you want to do art, then show it in a gallery," he said.

5. View Himself As An Artist, Either (So There)

When asked if he sees himself as an artist, he was firm, declaring, "No, no, no, no. I’m a designer, I do photos, I do books, I’m a publisher, but I don’t have the self-proclaimed label 'artist.' I hate that. Very pretentious. If other people say it, it’s very flattering, but if you start to say it yourself, you better forget about it."

Wait... did Karl Lagerfeld actually just say "fuhgeddaboudit," you guys? Oh no he didn't.... actually, yes he, did! As if I needed another reason to lurve him.

More like this
Harry Styles’ Red Carpet Looks Have One Thing In Common
By El Hunt
Why You Won’t See Prince William & Kate Middleton Hold Hands At The Queen’s Funeral
By Darshita Goyal
Bimini, Tia Kofi & More React To Cherry Valentine’s Death
By Catharina Cheung
How To Apply For 'Survivor' & Tips On How To Get Cast
By Meg Walters
Get Even More From Bustle — Sign Up For The Newsletter