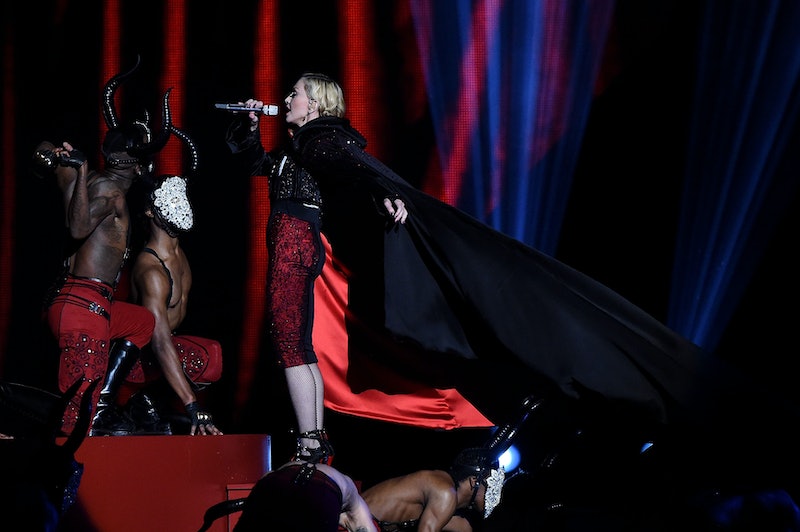 Is there a new fashion feud brewing? On the surface, it'd seem so. Giorgio Armani dared to call Madonna "difficult" after she blamed the cape he designed for her epic fail, er, fall, at the BRITs last week. A war of words, albeit a mild one, ensued, post-fall.

Here's the recap. Her Madgesty wore the fabulous Armani cape and claims the garment's weight, not her balance, caused her to take a tumble. "Everybody was worried my cape was going to slide off because it’s quite heavy, so they tied it really tight around my neck," The Material Girl said. "I pulled my silky string, and it would not come undone. And my two lovely Japanese dancers basically strangled me off the stage."

Armani's perspective? Well, he definitely took a swipe. "Madonna, as we know, is very difficult," he said, according to The New York Post. "This cape had a hook and she wanted a tie, and she wasn’t able to open it with her hands. That's all there is to it."

And that, my friends, is an expert shift of blame.

So are the gloves off for Madonna and Armani? Nah! Madge took the high road, refusing to further engage this drama, with her rep saying, "Shit happens. Madonna loves Giorgio Armani." Case closed.

Madonna is a total pro and she had a wardrobe malfunction. At least it wasn't a nip slip! I'm going to recall some of my favorite recent Madge stage looks and forget about Capegate entirely.

Madonna was a majorette, complete with the knee-high boots, on her last world tour. High school chic? Yep.

Madonna was a bit of a cowgirl in a white pantsuit and hat at the 2014 Grammys, as she performed while same-sex couples were married. It was about the message more so than the fashion, obvs!

For her Super Bowl performance in 2012, Her Madgesty mixed gold and leather for a gilded but tough exotic goddess look.

The all-black outfit, which had some leopard detail, was so James Bond and all stealth-like. It was also probably easy to perform in. But she looked like a total badass.

5. More Cowgirl, With Miley Cyrus As An Accessory

2014 was certainly the year that Madonna experimented with cowgirl chic. She was a rhinestone-studded cowgirl with Miley Cyrus as her main accessory. Giddy up.

Yes, her cone bra is probably her most iconic stage look of yore, but Madonna is still blowing us away with her stage clothes in this decade.