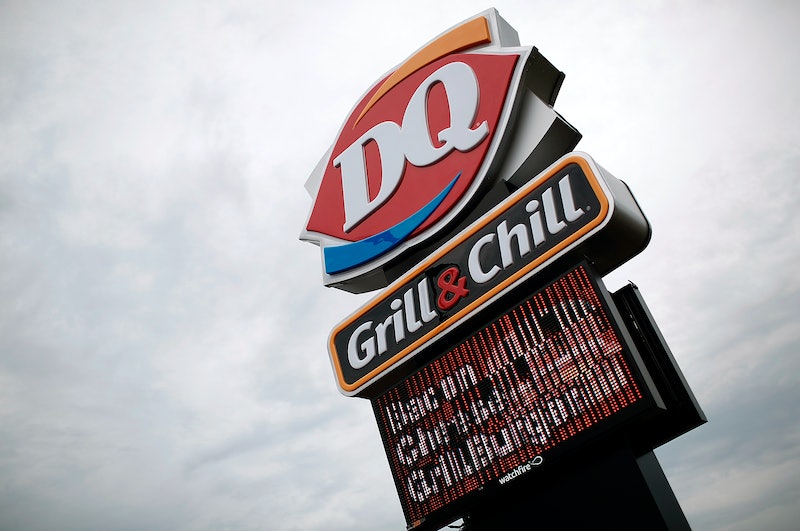 Normally, the celebration occurs on the first day of spring, but this year, they're changing things up a bit. Why? Because it's the 75th iteration of Free Cone Day. Given that this has been going on for a whopping three-quarters of a century, it's even more unbelievable that I didn't know about it, but whatever. Chalk it up to the fact that the nearest Dairy Queen to my hometown when I was growing up was probably about 45 minutes away. Anyhoo, in honor of its 75th iteration, Free Cone Day is happening on the 75th day of the year: March 16 (which, incidentally, is the day before my birthday. Happy birthday to me!). On that day, and that day only, you will be entitled to one free small vanilla soft-serve cone, complete with signature curl on top, at participating Dairy Queen and DQ Grill and Chill locations. As you might expect, there's a one-per-customer limit, but so be it — share the love.

Like IHOP's National Pancake Day, Dairy Queen's Free Cone Day is a fundraiser. While the promo is going on, participating locations will be collecting donations for Children's Miracle Network Hospitals; as such, it wouldn't be amiss for us to donate what would have been the cost of our cones on that magical, magical day. According to Hutch News, Dairy Queen has raised more than $100 million for the hospital network over the past 30 years through Free Cone Day. Not too shabby, right?

But wait, there's more! Dairy Queen's executive vice president of marketing, Barry Westrum, said in a press release that “Free Cone Day is just the beginning. We will surprise and delight our fans year-round with food and treat innovations that they have come to expect from us. We're extending the celebration beyond Free Cone Day because it's about more than just one day. It's about the people that have been making the Dairy Queen brand a part of their lives for almost a century.” There's no word on what exactly those delightful surprises will entail, but I'm sure it will come soon enough.

Head on over to Dairy Queen's website for more info. Mark your calendars!