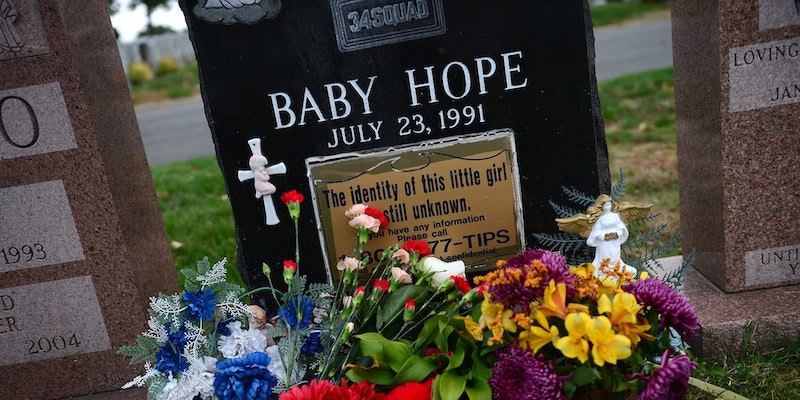 The 22-year-old case of "Baby Hope", the four-year-old girl who was found strangled in a cooler in New York in the 90's, has at last been solved, after a cousin of the victim confessed Saturday to sexually assaulting and killing her.

Although the case had remained a mystery for over two decades, with the girl's real name and even her age not known, police announced last week that a tip this summer, followed by a DNA test, had allowed them to finally identify the victim's mother.

"Over the years, the optimism was always there except the frustration would grow," said Detective Joseph Reznick who read the eulogy at the girl's burial back in '93. "I think reflecting back on what we named this little girl, Baby Hope, I think it's the most accurate name we could have come up with."

The girl, identified for the first time as Angelica Castillo, was found smothered near the Henry Hudson Parkway Washington Heights, malnourished and sexually abused, back in 1991. On Saturday, her 52-year-old cousin Conrado Juarez was arrested and charged with felony murder. According to Police Commissioner Ray Kelly, Juarez had been staying with his sister at her house in Queens when he attacked the girl, reportedly strangling her with a pillow when she tried to yell out. And Juarez, a dishwasher, didn't work alone — the sister helped him dispose of the girl's body. They were both cousins of the victim's father.

"I'm an eternal optimist. I always hoped, the name [we gave her] was very appropriate," said New York City Police Detective Jerry Giorgio, who had worked on the case until his retirement this summer ever since getting it in 1991.

The tip came after renewed efforts this summer — the 22nd anniversary of the discovery of Baby Hope — when police hung fliers and announced a $12,000 reward for any information that could help them with the case.

"They made it their mission to identify this young child, to lay her to rest and to bring her killer to justice," Manhattan District Attorney Cyrus Vance Jr. said Saturday, referring to the investigators on the case.

The girl had been nick-named "Baby Hope" by the detectives at the 34th precinct, who also paid for her headstone at St. Raymond’s Cemetery in the Bronx, bearing the inscription: "Because we care."