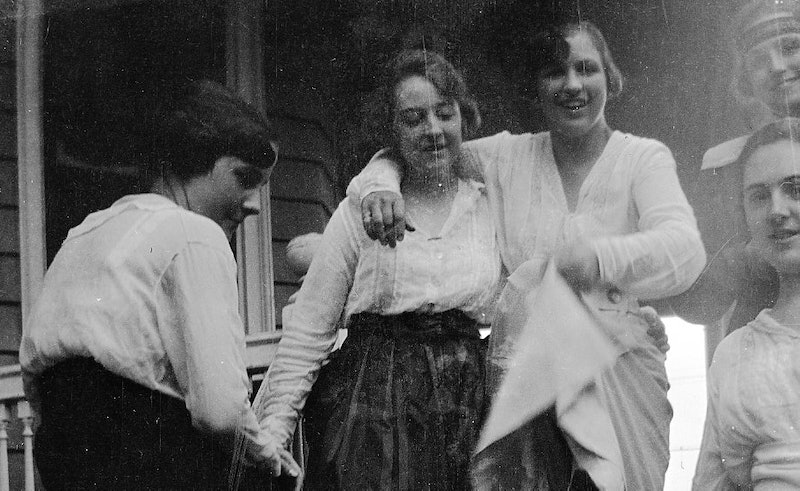 Today when you go to the doctor, you can pick up pamphlets on pretty much everything under the sun, from advice on how to come out to your parents to tips on how to get rid of dry skin under your nose. I'm hoping, though, that if you were going today, you wouldn't find anything quite like this 1905 pamphlet labeled "Is College Bad For Girls?" which apparently was distributed at a friendly doctor's office near you.

A bit of context: In 1900, just five years before the publishing of this pamphlet, only 2.8% of American women attended college. And when you see the attitudes reflected even in advice from medical professionals, it's no wonder that number was so small. Among the pamphlet's key points were the fact that women would be (GASP) unsupervised and unchaperoned, and left alone with this dangerous thing called free will after midnight, which was apparently deemed a particularly ill-fated time of day for women's decision-making way back when.

As entirely offensive as this is to the entire human population, it is still grossly fascinating to see the kind of opinions that were so accepted as the "norm" back then that nobody would bat an eye if someone presented it to them. Here were some of the pamphlets main points:

"Evils of Dormitory Life—Midnight Hours of Who Knows What?"

Hmmm, I dunno. Maybe studying, sleeping, having wild and enjoyable sex with fellow students, or any number of things that are totally valid and normal and nobody's damn business?

Oh no, I did this so many times in college and I DIDN'T EVEN REALIZE. SHOULD I TELL MY DOCTOR?!

It was apparently super dangerous for women to be made aware of the world beyond a pristine five-foot radius of innocence in 1905.

"Forming of Unladylike Habits that May Harm the Health & Morals of a delicate Girl—Such as Smoking & Card Playing."

Here's the eye-roll of the century (complete with a woman whose bra strap is falling down because college) so you can see the vintage sexism for yourself:

Clearly, rights for women still have a long way to go, but man, sometimes it's nice to just sit and consider the fact that things ARE a lot better than they used to be. Keep up the good fight, ladies!