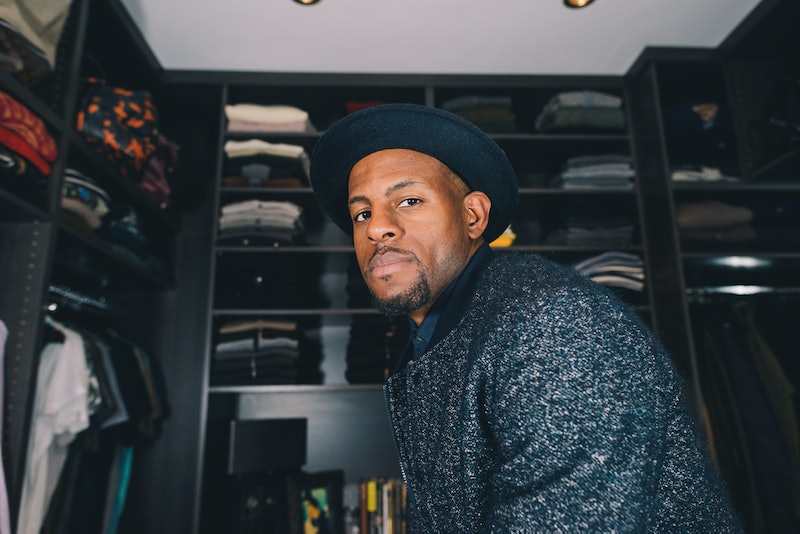 Fashion and sports are linked up yet again, but it's the platform that really interests me with this new partnership. Used clothing e-commerce platform Twice hired NBA star Andre Iguodala as style director and brand ambassador for its menswear offerings, according to Women's Wear Daily. I had never heard of Twice before, but as someone who gets a retail thrill out of scoring rare and unique finds at upscale thrift shops, I was immediately intrigued by the consignment-shop-esque website.

According to WWD's report, Iguodala, who plays for the Golden State Warriors, will oversee the men's marketplace. He jumped at the chance to be involved, since he has wanted to expand his portfolio after relocating to Nor Cal. "Joining a revolutionary e-commerce platform has been a goal of mine since I moved to the Bay Area, and I look forward to helping Twice fuel their tremendous growth," Igoudala reportedly said in a statement.

Igoudala's new roles will consist of creating both seasonal and themed look books and curating original content. He will also sell his own clothes via limited edition Twice shops — awesome for tall dudes! — and will even share a video of his own closet to educate users and customers of how, exactly, Twice functions.

Ah, there it is. That's my main area of interest. While I love ballers and all, I don't necessarily want to, you know, wear their clothes. I am not super into the menswear trend, either, and I'm too short to swap wardrobe's with an NBA player, even if I was interested in athleisurely pieces.

The Twice facts are as follows. A pair of former Google employees wanted to enhance what eBay essentially does, so they created Twice, which initially sold women's clothing, in 2012. It now offers 500 (!!!) brands.

Want to clean out your closet and sell your stuff? You simply send gently used apparel to Twice, whose staffers will evaluate the pieces, then make you an offer, and list them in the marketplace. It's like taking pieces to the thrift shop for sale; you just have to ship them via a free Selling Kit in this case.

It sounds like Twice is a more carefully edited version of eBay, since there are staffers choosing which items are sold, whereas anyone can sell anything on eBay.

If you are a thrifter or love consignment shops, but also want to shop online, this platform combines all three elements. I personally prefer to touch and feel the clothes in resale shops, even though I sometimes get psychosomatically itchy because of it. But I am so not against finding stuff online, either, especially since there is a staff monitoring what goes into the marketplace. Hopefully the partnership with Iguodala will help gain Twice some much-deserved notoriety!