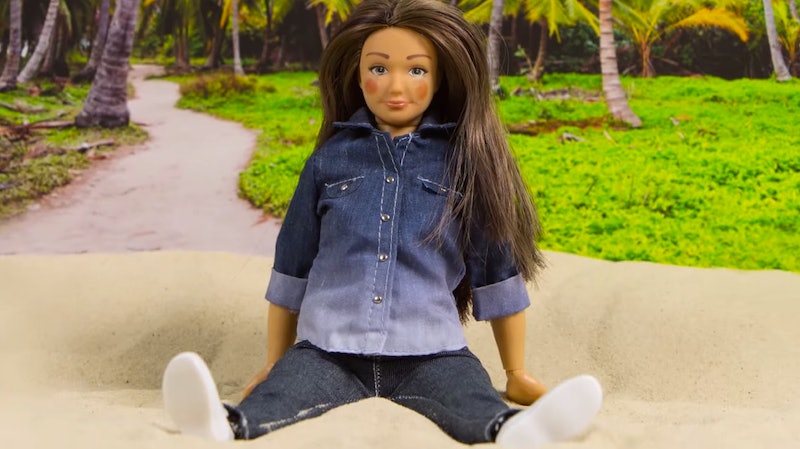 Last November, there was quite a stir in the pre-Christmas toy-buying rush when Lammily the realistically-proportioned doll was released, providing a Barbie alternative that was representative of a real, average American woman's body. Not only is she much more proportional, but she comes with stick-ons for freckles, acne, stretch marks, and other markings to make the doll owners feel their uniqueness is appreciated. It's been a little while since we heard from her, but Lammily just went on Spring Break, and even when she is partying hard with the best of them, she is giving us some solidly awesome reminders about the meaning of true body acceptance.

Lammily's Spring Break adventures begin with an onslaught of advertising, showing traditional Barbies with their conventionally perfect bodies in bikinis, lounging in print ads, and twerking their Barbie butts on television. (If nothing else, please watch this video for the insanely funny Barbie twerking, I'm begging you.) She braves the beach crowd anyway, and although she is self-conscious at first, she comes to realize that everyone has flaws, even the seemingly perfect people. She realizes (as we all hopefully do at some point) that if they're all having fun, then she should be, too. This is also the point in the story where we find out that Lammily is among the baddest and bestest DJs of her time because apparently that's what happens when you achieve body acceptance.

Interestingly enough, Lammily already released a video of what the doll would look like photoshopped to look like a Barbie. Here's the difference:

The moral here is, as always, that we look the most beautiful when we are comfortable in our own skin, and not worrying what everyone else thinks of us. And also when we are boogeying on a beach with a delightfully acne-ridden Ken.

More like this
Craving The Beach? Here's Your Guide To A Solo Vacation In Turks & Caicos
By Alexis Morillo
Berriez Founder Emma Zack On Her Size Inclusive NYFW Show
By Dominique Norman
Black Women's Equal Pay Day Highlights An Upsetting Problem
By Brandi Neal
Why TikTok Is Flooded With Controversial Videos About "Pick Me Girls"
By Courtney Young
Get Even More From Bustle — Sign Up For The Newsletter