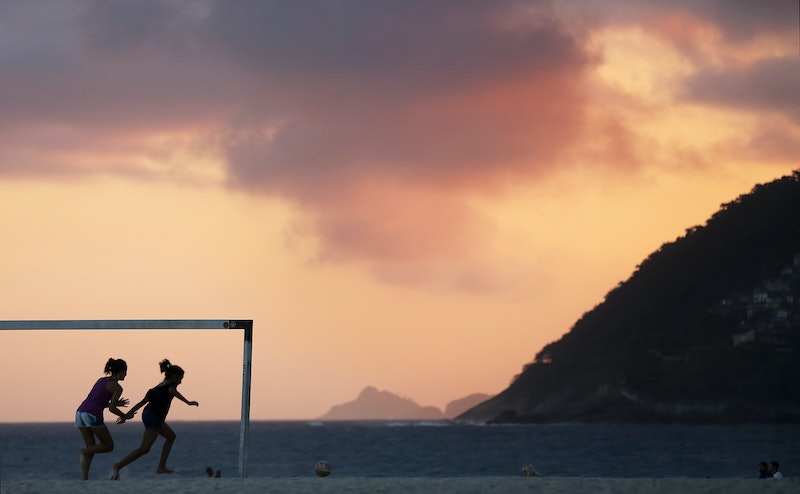 It's common knowledge that saying someone does something "like a girl" is an insult — although rather than putting down the person at which it's directed, it's usually more insulting to actual girls everywhere. But Always' #LikeAGirl campaign is working on that with their new video. Entitled "Stronger Together," this second video expands on their first project; this time, they show girls from around the world participating in sports and activities from basketball to gymnastics and from horseback riding to chemistry — and doing it "like a girl." In other words, being awesome.

I am a perennial skeptic of the potential revolutionary power of advertising; after all, advertisers only care about girls' self-esteem in as much as caring about it can help them sell something (which isn't really caring at all). I also agree with Bustle's Elizabeth Licorish when she argues that we might be better off encouraging girls to do things "like a woman" instead of focusing on making them proud of doing things "like a girl" — after all, she points out boys aren't told to "run like a boy" but "run like a man."

Still, it's undeniable that the stigma attached to doing something "like a girl" is harmful to girls' self-esteem and needs to be changed. So with that in mind, let's look at what "like a girl" looks like in this video.

There is nothing silly about the way this girl skates.

No one can insult the way this girl spins a basketball.

The way this girl hits a tennis ball is nothing to make fun of.

Riding a motorcycle "like a girl" looks pretty awesome, actually.

The video manages to slip a little math and science in, as well. And even though I've never heard anyone say "you do math like a girl," women are still so underrepresented in STEM fields that I'll take it. Because doing math "like a girl" is terrific, too.

Don't think for a second that being a girl means someone can't climb like a rockstar.

Check all the inspiring things the girls do in this video and remember that being a girl is awesome — and that girls do awesome things, while they're at it. Just, you know, try to ignore the part where Always is trying to use all this inspiration to sell you stuff.