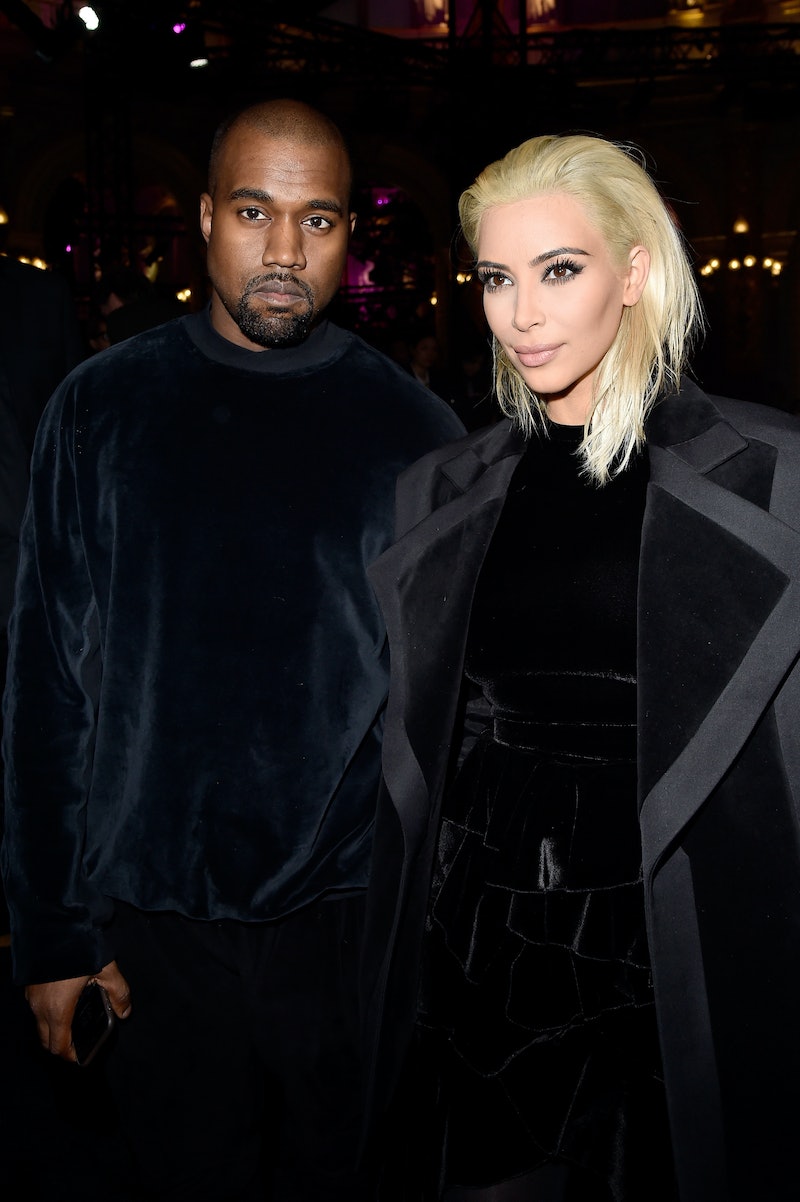 In case you missed it (if so, where have you been hiding?!) Kim Kardashian dyed her hair platinum blonde for Paris Fashion Week, ditching her dark locks for a brand new lease on life. The fresh tresses are just part and parcel of Kardashian's whole high fashion makeover, courtesy of her much more fashion forward husband, Kanye West, and their entourage of famous designer friends. The new 'do definitely gave the reality star an avant garde edge as she made her way to Balmain's front row.

Though she tried to keep her hair under wraps, sporting a highly uncharacteristic knitted beanie, everyone saw through her sartorial trickery long before the reality star made her big reveal this morning. Although this isn't the first time she's gone blonde, it is the first time she's gone this blonde, that's for sure. Mrs. Kardashian West first lightened her hair last year to an ombré, carmel-colored hue, at the urging of her husband and the patron saint of all things fashion, Carine Roitfeld, Editor-in-Chief of CR Fashion Book and Global Fashion Director of Harper's Bazaar

Sure, wanting to look different while attending the Paris runway shows may be the ostensible reason Kardashian chose to undergo this hairdo change-up, but I think I've divined some of her real motivations behind going full-blown towhead. Check them out below. But first — the hair!

To Throw Off The Paparazzi

Kim Kardashian is one of the most photographed people in the world. What better way to throw the paps off your trail than a radically different look? At award shows and parties, Kim will now be able to easily blend into the sea of famous blonde starlets without even a second glance. After all, is a Kardashian without waist-length glossy brown hair still a Kardashian?

To Amp Up Her Selfie Game

With her book of selfies, Selfish, set to debut in only a few short months, Kardashian might be feeling like she needs to mix things up a bit. Her bevy of brunette images was starting to feel downright basic, so to give Selfish that much-needed edge, she's gone perfectly platinum.

Perhaps most people don't know this, but long before Kardashian made a dubious name for herself off a certain sex tape, she was not only Paris Hilton's BFF, but also her personal assistant (the horror!). If you don't believe me, just take a look at any of the early episodes of Paris Hilton's reality TV show to see her hilariously boss Kim around and refer to her as her maid. Now that she's become bleach blonde, Kardashian is simply one step closer to making all of her childhood socialite dreams a concrete reality. Take that, Paris.

To Be Compared To Marilyn Monroe

Lately, a number of flaxen haired actresses have been getting casually, and probably unjustly, compared to the iconic Marilyn Monroe. As the most talked about woman of our time, Kardashian simply could not stand to be left out of the conversation. Though her life is nowhere near as tragic or fraught as the Hollywood legend's, she wanted to make the comparison far easier for everyone by dying her hair Monroe's exact shade of champagne blonde. A foray into films and an "accidental" windswept white dress moment can't be far behind.

Yes, just like that terrible, terrible dress that will forever haunt your dreams, but in reverse. Kim Kardashian actually meant to streak her already black hair with some blue highlights, and instead ended up turning the whole thing white and gold. Girl, I feel for you. The whole world feels for you. No one will ever know what color is what ever again. Will this optical illusion never end?

More like this
Kanye West Apologizes To Kim K "For Any Stress I Have Caused" In Rare Interview
By Jake Viswanath
Kanye West Revealed The High Percentage Of Time Kim Kardashian Raises Their Kids
By Brad Witter
Hailey Bieber Channeled Jackie Kennedy At Paris Fashion Week
By Allie Fasanella
Bella Hadid's Best Runway Looks Of All Time From Paris, Milan, & More
By Allie Fasanella
Get Even More From Bustle — Sign Up For The Newsletter