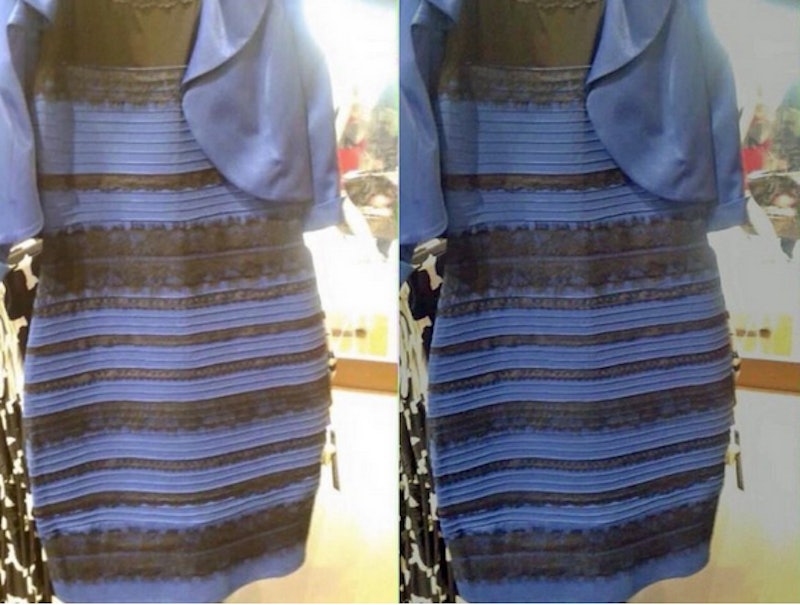 Well, it's officially been a week since #THEDRESS entered all of our lives and casually destroyed everything we thought we knew about colors and/or the universe. You know a few years ago when Inception came out and we all saw it and texted our friends afterwards, "Oh my gosh. Have you seen Inception? It will MESS you up." To me, #TheDress is kind of like that. Call it Dressception, if you will. Whether you were team gold/white or team black/blue or, like me, you saw both combinations, causing you to question everything you thought you knew in life before that moment, odds are that for at least a little while, #TheDress really messed with your mind. Now, as we look back a week later, it's hard to imagine a reality before #TheDress. A world before we all stopped what we were doing on a Thursday night and let a Tumblr post dictate our conversation for the next 24 hours or so.

Personally, since Dressception, everything has seemed a little bit different to me. I mean, is my favorite color really blue anymore? Is blue even blue? WHAT ARE COLORS? WHAT ARE WORDS? WHAT IS LIFE? Now this line of questioning seems to be my pattern of thought for basically anything. It's kind of like when you're up at 2 a.m. talking to your roommates about nothing and someone goes, "Have you ever wondered how we know that the same way I view a color is the same way YOU view a color?" This question also falls into the "But, really, how weird is, like, eating food?" category. You get the idea. The Dress was like that, but magnified by the power of the Internet... aka a million bagillion trillion times. Approximately. Just an estimate.

Since last Thursday, the actual dress is now being sold online everywhere. iPhone cases of The Dress are now being sold. Someone got a tattoo of The Dress (yes, really). It's a phenomenon, and just about everyone has an opinion on what color it REALLY is. And, you know, I kind of envy those who have only seen one set of colors. At least they can be confident that, to them, the dress can only be seen one way. Me? I don't know what to believe anymore. Is up really up? Is reality even real to begin with? Are we all living in a dream world controlled by Leoardo Dicaprio? It's terrifying. Granted, the last idea doesn't sound too terrible to me in theory, but you get the idea. I just have a lot of questions now, guys. A lot.

More like this
Confused About Blush Placement? This TikTok Makeup Hack Will Help
By Olivia Rose Ferreiro
The Pros & Cons Of The "Moisture Sandwich" Trend, Explained By Derms
By Olivia Rose Ferreiro
Tilda Swinton’s Neon Yellow Hair Is More Than A Style Statement
By Justine Knight
Why TikTok Is Flooded With Controversial Videos About "Pick Me Girls"
By Courtney Young
Get Even More From Bustle — Sign Up For The Newsletter