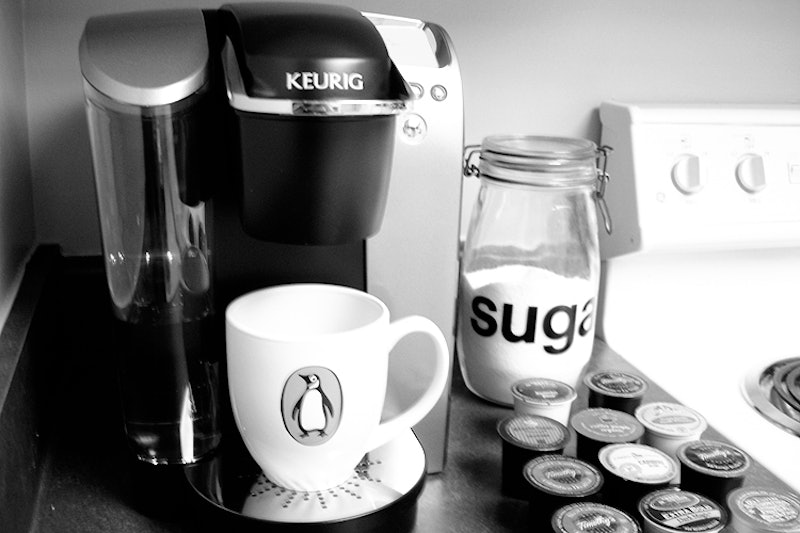 Some people love their Keurig machines; others feel they signal the end of society; but what does the guy who invented them think? Not well of them, unfortunately: Keurig inventor John Sylcan kind of regrets dreaming up the pod-based coffee machines. Uh… whoops?

A piece James Hamblin penned for The Atlantic about the current state of the Keurig has been making the rounds this week, and of course the thing we all find most fascinating is the whole regret factor. Sylvan created the Keurig in the early '90s; he had quit his office job to start a business, and even though he didn't particularly like coffee himself, he knew the pods would sell. “It's like a cigarette for coffee,” he said to Hamblin, “a single-serve delivery mechanism for an addictive substance.” These days, though, Sylvan doesn't even have one himself. “They're kind of expensive to use,” he said, adding that “it's not like drip coffee is tough to make.” Even commented that in retrospect, “I feel bad sometimes that I ever did it.”

The big issue with the Keurig, of course, isn't the ease with which it makes single-serving coffee. It's not even the fact that buying a constant supply of K-Cups is generally a heck of a lot more expensive than buying coffee beans or pre-ground coffee. It's the fact that K-Cups produce a ton of plastic waste — which is terrible news for the environment. That's largely where the backlash to the machine (which still remains hugely popular) has come from; it's also what spurred that “Kill the K-Cup” video that hit the 'net earlier this year:

K-Cups are recyclable if you break them down into their individual components — paper, plastic, and metal — but it's kind of a pain in the arse. Keurig knows it's an issue, too; said Keurig Green Mountain Chief Sustainability Officer Monique Oxender to The Atlantic, “I gotta be honest with you, we're not happy with where we are either. We have to get a solution and we have to get it in place quickly.” The company previously announced that they were planning to make a fully recyclable version of the K-Cup by 2020 — but a) that's five years (and a lot of used K-Cups) from now; and b), Sylvan himself isn't optimistic. “No matter what they say about recycling, those things will never be recyclable,” he told Hamblin. “The plastic is specialized plastic made of four different layers.”

But hey, even if the K-Cups themselves aren't easy to recycle, we can do something about the problem — as long as we're willing to get creative. Loads of people on the Internet have taken to posting DIY projects and ideas that repurpose the little plastic pods after they've been used, and you know what? Some of the ideas are pretty nifty. Here are a few of my favorites

1. Make another cup of coffee with them.

It's actually incredibly simple to get more than one use out of your K-Cups. All you have to do is remove the foil top from a used one, empty it out and rinse it with water, pack it full of fresh ground coffee, and top it off with a piece of aluminum foil (make sure you've secured it tightly under the outer rim of the cup — you want to make sure you have a solid seal on it). Then stick the newly-filled K-Cup back in your Keurig, making sure the hole in the bottom is at the 12 o'clock position, and make your coffee as usual. Voila! It creates less waste, and it's a money saver, too. It's worth noting that I don't know how many times you can reuse a single K-Cup — but still, reusing it even once will cut down your plastic waste by 50 percent.

2. Put 'em to work as an organizational system.

Loads of people around the Internet have found ways to use old K-Cups to store small items and odds and ends. A popular method involves removing the foil, rinsing them out, and then sticking them in a spice or K-Cup rack — you can use the resulting system to organize beads and other crafting supplies, hair accessories like bobby pins, sewing supplies, and more.

3. Make mini-planters or seed starters out of them.

I tend to kill everything I try to grow, so I'll probably pass on this one myself — but if you've got more of a green thumb than I do, you might give it a shot. If you live in a city, they make for adorable window box or hanging gardens; or, if you live somewhere where there's more earth than asphalt, you can give your seedlings a start in them before transferring them to a larger pot or to the actual ground. Bonus: Used coffee grounds make for fabulous fertilizer.

Coffee in the morning; Jell-O shots at night. It's the circle of life. On that same note, you can use clean K-Cups for pretty much any project you might need Dixie cups for, so why not save a few bucks and do some good for the Earth while you're at it?

5. Turn them into tiny popsicle molds.

Fill 'em with whatever you want, stick a tooth pick in 'em, pop 'em in the freezer, and wait. Coffee pop, anyone?

6. Do some crazy arts and crafts with them.

I feel like these might be more useful if you have kids and need an activity for them, but this roundup of ways to reuse your K-Cups is full of projects wee ones will love: Making them into little pilgrim hats at Thanksgiving, turning them into a homemade mancala set, using them as stamps with paint, and so on and so forth. They might not be the most professional-looking decorations, but they still look like they're fun to make.

7. Do this neat-o kitchen hack with them:

Get some fresh herbs. Chop them, slice them, dice them, or do whatever you would normally do to them if you were about to cook something with them. Then pop them in a clean K-Cup with a little bit of water and freeze them. You'll have perfectly portioned fresh herbs whenever you want them — no more dried stuff for you!