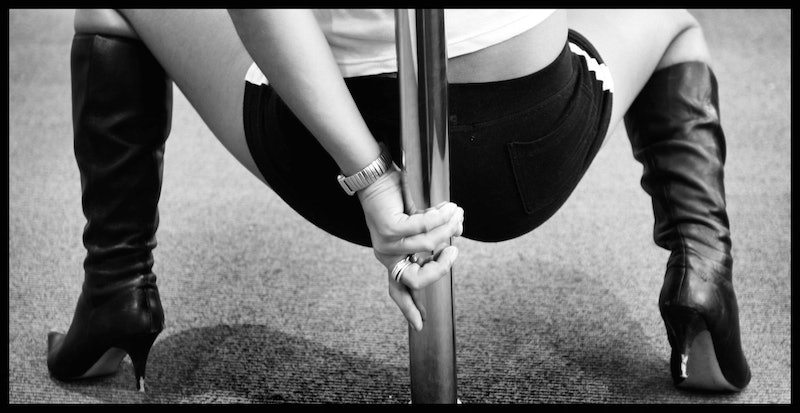 If you're on a juice cleanse but still feel like surrounding yourself with naked women, questionably sticky tabletops, and drunken bachelor party members, then it's time to book a plane ticket to Nebraska, because adult website owner Shane Harrington is opening juice bar strip clubs along Interstate 80. I mean, who doesn't want to sip on wheatgrass-y goodness while watching women display pole dancing skills you could never hope to achieve? ...Actually, that was meant to be totally sarcastic, but when I put it like that it doesn't sound too bad. According to Cosmopolitan, Harrington's idea is less Magic Mike and more nudist juice bar. "We're going to be an alcohol-free [and] drug-free strip club," he told KETV. "If girls want to drink or do drugs, we're not the right strip club for you." It's a solid business model, considering juice bars' typical fitness-obsessed clientele, but despite Harrington's plans to keep his strip club classy, it's facing opposition from Seward Country residents. Church leaders and various other locals swarmed a county planning and zoning board meeting to express their displeasure, telling KETV that they "just don't want something like that across [the] street."Harrington's response was honestly kind of hilarious. From KETV: "Harrington said it's hard to believe no one desires the entertainment he offers when his income says otherwise."

Apparently, Seward County residents provide plenty of business, because Harrington's business has done a "record number" of parties in the area. He then went on to point out that all the hullabaloo was just earning him more money in the end, in addition to being completely pointless. "W

hen I do open, it will be another circus just like this," he said.

Apparently the residents of the rest of the area DGAF, because Harrington's efforts to buy land for a second location in Hall County have gone unopposed. Will nudie juice bars be the next big thing? I have no idea. But I do know that Harrington needs to get a reality show, because that man is an expert in throwing shade.