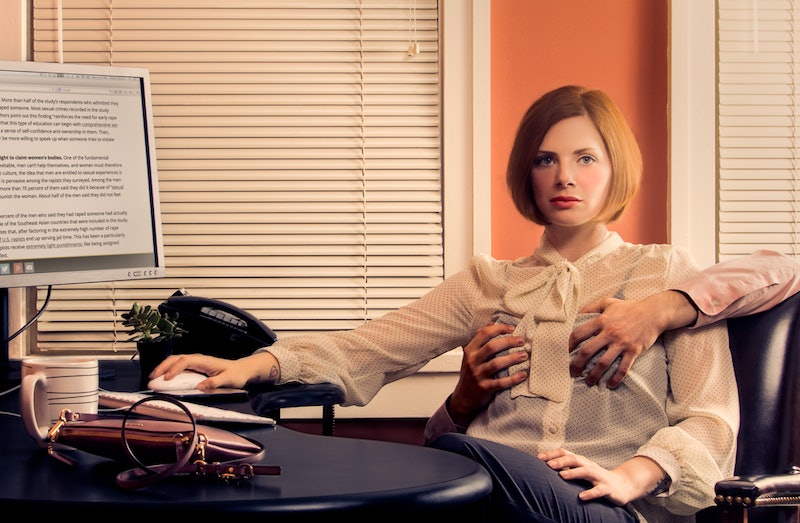 With the discussion about street harassment, rape culture, and entitlement still going strong (as well it should be), numerous art projects have recently sought to draw attention to these issues — as well as many more. Brooklyn-based photographer Allaire Bartel's series “Boundaries” is the latest to tackle them, specifically focusing on sexual aggression and male entitlement, as well as on how we have come to deal with them in our daily lives. There can be no doubt that most, if not all, women have experienced being on the receiving end of some form of sexual aggression — and these images drive home exactly how common an occurrence it is.

The intrusion is represented in the images by disembodied male hands grasping at a women as she goes about her everyday life: At work, taking a yoga class, at home, and so on. The choice of hands makes sense for a visual medium like photography; but know, too, that when you're out in the world, the intrusion those represent isn't limited to physical grabbing. Sometimes it is an unwanted and unsolicited touch; other times, though, it's a catcall, or a gaze lingering too long where it has no business being. And yet we have grown so used to it that often, as seen in the “Boundaries” model's expression, we don't even react. As Bartel told BuzzFeed about her own experiences, “Twice in the same day someone had made an inappropriate comment and someone else had touched me inappropriately… and I hadn't reacted at all. I realized that we have all become conditioned to these things happening to us. They're just 'normal.'”

But they shouldn't be. And that's what “Boundaries” hopes to change.

“Boundaries” was born out of the 2014 Young Photographers Alliance Mentoring Program. The theme itself also coincided with the Santa Barbara shooting in May, an incident which opened up the discussion about misogyny, entitlement, privilege, and rape culture in a way it never had been before. “I had never seen a conversation as open about this topic,” Bartel comments in a video introduction to the “Boundaries” project — something she found enormously inspiring. She further writes on her website:

“It was congruent with a time when there was a prevalent, open online discussion about what it meant to be a woman in a man's world. Being able to read about the experiences of other women, and in turn share experiences with my female friends made me feel connected, supported, and especially inspired to create work that interpreted this conversation in my own way.”

Bartel and her friend Erin Cooper, who serves as the "Boundaries" model, had discussed collaborating in the past; Bartel also knew that the theme she wanted to explore would likely strike a chord with Cooper. So the two got together, coincidentally after an awful day Cooper had at work — and listening to her friend vent about the issues she faced in the workplace, which included a good deal of casual sexism, Bartel thought, “That's it. It's the things that happen every day, the things that happen in our work life and our home life — that's what the project needs to be about.” As Bartel points out in her video, society has a tendency to view extreme incidents like the Santa Barbara shooting and domestic violence as “isolated incidents”; in reality, though, women face violence and aggression directed at them purely for being women every single day.

It's worth noting that the series depicts the situation from one specific perspective: That of an apparently well-off white woman. Women who don't fall under that demographic — women of color, low income women, LGBT, women, and more — likely have had different experiences than the ones seen in “Boundaries.” But just because the experiences are different don't make them any more or less acceptable; the bottom line is that #YesAllWomen deal with this sort of aggression in a variety of different forms, and it is never, ever OK.

In light of the attention “Boundaries” has gotten, Bartel is hoping to keep using it to do some good: She's looking into producing a limited run of prints of the series and donating some of the profits to the Women's Center and Shelter of Greater Pittsburgh. According to her website, she's still working on the details; stay updated by visiting her home on the web at AllaireBartel.com.

More like this
At 28, Melanie C Was Falling In Love & Reclaiming Her Confidence
By Olivia-Anne Cleary
Self Esteem's “F*cking Wizardry” Is An Anthem About Knowing Your Worth
By El Hunt
Isa Guha Is Taking The Lead
By Charlie Mock
How To Politely Reject Someone Who Keeps Asking You Out
By Laken Howard and Lexi Inks
Get Even More From Bustle — Sign Up For The Newsletter