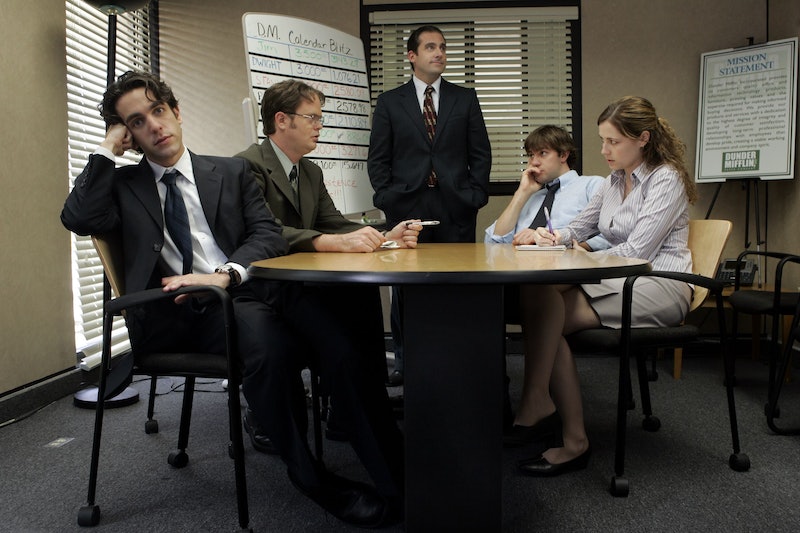 March 6 is Employee Appreciation Day, and you've definitely earned this day of adoration. When you graduated college, however long ago that was, you were the lowest person on the totem pole. Since then, you've climbed closer and closer to the top of the corporate ladder. You've worked on the weekends, taken on extra tasks, and have put up with a slew of people who make going to the office an adventure.

Anyone who has worked in an office (or just watched The Office) knows what I'm talking about. Within every company, be it a Fortune 500 or a small startup, lies a certain group of characters that you will find in every office space across the country. No matter where you work, you're bound to rub elbows with a guy who takes too many breaks, a girl who puts everything off till the last minute, and that lucky someone who turns into a work BFF.

In honor of Employee Appreciation Day, let's raise our cooled off coffee mugs to the men and women whose personalities, not skills, make a company function. From the co-workers we love to the ones we loath, here are 15 employees you'll find at any office anywhere in the world.

Don't expect this co-worker to log any overtime. You see this fella for exactly eight hours a day — no more, but sometimes less. Even if the boss demands everyone stay late to meet a deadline, he still sneaks out at 5 o'clock sharp, leaving you to pick up his slack.

She is at the helm of the company, and for one very important reason — she gets sh*t done. She sets the bar high and expects everyone to reach it... or else. Although her employees occasionally complain about her all work and no play attitude, they wouldn't want anyone else leading the team.

You can't bump into this co-worker without enduring an hour of not-so-small talk. She normally shares boring anecdotes about her after work adventures, but every once in a while you get a juicy piece of office gossip, making the conversation completely worthwhile.

Even your supervisor forgets this employee exists. Unlike your other co-workers, this guy likes to keep to himself and get his work done. The only time anyone talks to him is during the office holiday party, where he constantly reminds people that he is not new to the company.

She's rarely seen without a smile or freshly baked batch of brownies. Because of her listening skills and sweet spirit, everyone turns to her when they need advice. Unfortunately, these in-office therapy sessions keep her from getting any actual work done. Not that she's complaining, of course.

Fresh out of college, this co-worker will do anything to get ahead... and we mean anything. Whether it's taking on an extra assignment or going to get the boss a cup of coffee, she says yes whenever anyone asks her to do something.

Got any cheese to go with this guy's whine? If you ask him (and even if you don't) he'll tell you the office is too cold, the Internet is too slow, and the people around him are too loud. You've debated stapling his mouth shut, but quickly realize he'd only file a complaint with HR.

Your heart skips a beat when you catch this co-worker's eye. His award-winning smile and all-American personality are the reasons you enjoy coming to the office (and, if we're being honest, the reasons you put any effort into your appearance).

She's deemed herself the wisest woman in the world — not just the office. In reality she doesn't know a damn thing. She always asks you to explain something (for the 10th time no less), but rolls her eyes whenever someone else raises their hand at a meeting.

As soon as he enters the office, he starts his internal countdown to happy hour. Although he holds off on drinking till he leaves the building, he does have a secret stash of libations for emergencies.

You're having a hard time concentrating, and not because you're tired. It's because your cube mate is playing his Spotify station at maximum volume... and singing along at the top of his lungs. Although you find this extremely irritating, you can't help but join in when you hear your jam.

While everyone else is frantically typing, this guy is trying to sweep his friend in Trivia Crack. Yet despite his blatant lack of effort, he still manages to hand in his assignments on time, leaving you to wonder what the hell you’re doing wrong.

This guy has been with the company since it began, and has no problem reminding people of that fact. As he postpones his retirement yet again, you start to wonder if he'll die at his desk. But don't worry — you're only a bad person if you and your co-workers bet on it.

You wouldn't make it through the week without this person. He listens to you vent about an obnoxious co-worker, shares hilarious viral videos, and reminds you to take a lunch break. And you know if it came to it, he would execute a Horrible Bosses-style plan with you.

More like this
Black Women's Equal Pay Day Highlights An Upsetting Problem
By Brandi Neal
8 Completely Unserious Tips To Make Your Cuffing Season A Success
By Ginny Hogan
10 Ways To Be More Empathetic To Your Partner
By Raven Ishak and Lexi Inks
Think Your Partner Is Cheating? These Tarot Cards May Confirm Your Suspicions
By Kristine Fellizar
Get Even More From Bustle — Sign Up For The Newsletter