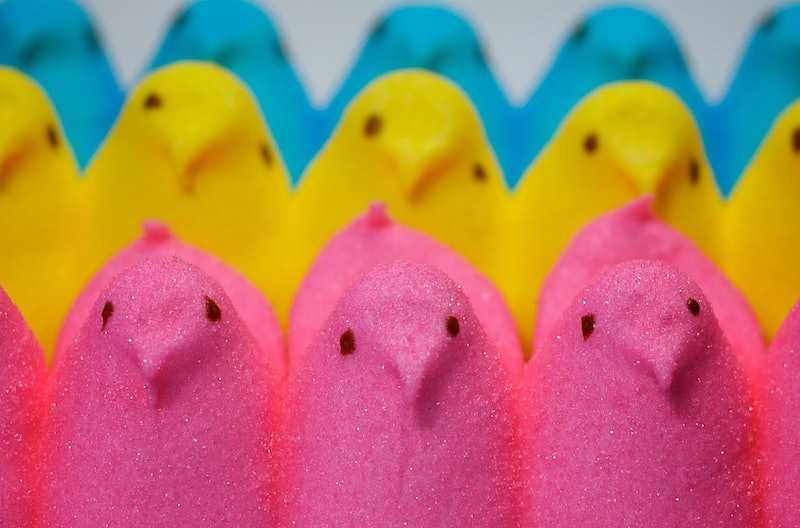 Today in horrifying seasonal foods, I offer you the following piece of grossness: Peeps-flavored milk. As in, milk that has been doctored with goodness knows what until it resembles a liquified version of those sickeningly sweet little marshmallow birds and bunnies kids seem to love so very, very much. No, I don't understand it either. But hey, I suppose stranger things have happened, right?… Right?

According to a press release, Midwestern dairy company Prairie Farms has teamed up with Just Born, the company that produces Peeps, on a collection of beverages geared towards making Easter as festive as possible. There are varieties to choose from — Peeps Chocolate Marshmallow Milk, Peeps Marshmallow Milk, and Peeps Easter Egg Nog — although alas (or joyfully, depending on your point of view), they're only available in 10 states: Illinois, Indiana, Kentucky, Mississippi, Missouri, Michigan, Tennessee, southeastern Wisconsin, eastern Iowa, and southwestern Ohio. I don't know about you, but I think this might be an indication that we've reached maximum seasonal food capacity. I mean… Peeps-flavored milk. What else is there left? Not much. I, for one, have exhausted my reserves of creative seasonal food creations. For the curious this is what milk looks like after all those Peeps have gotten their sticky little wings all over it:

Things I imagine it tastes like, by the way, include the following:

Things I imagine Peeps-flavored milk does not taste like include the following:

Then again, I'm not the target demographic for this stuff, so I suppose maybe it'll appeal to kids.

In any event, though, Peeps milk is far from the only slightly bizarre Easter food on the market right now; these others are available, too, and I'm sure more are on the way. I think I'll pass, though. There's only so much sugar I can deal with in one season — and given the size of my sweet tooth, that's really saying something.

So basically, it's green Twizzlers Pull-N-Peel, right? I feel like it might not actually be the best base for your Easter basket, though — wouldn't it sticky after a while?

Few foods are more divisive than Marmite, although you'll have to live in the UK to get one of these suckers. Some will love it; some will hate it; and some will run screaming in terror from it. Choose your own adventure.

Who could eat such a cute little thing? WE ARE ALL MONSTERS.

Actually, those don't sound so bad. They're probably best in small doses (and with a large cup of tea to cut the sweetness), but I'd eat 'em.

...Aaaaaaaaand I'm out. That is too much even for me. Peace.

More like this
10 Pumpkin Recipes That Are Way More Creative Than Pie & Lattes
By Rebecca Deczynski and Alexis Morillo
TikTok's Butter Board Might Be The New Cheese Plate
By Emma Carey
On TikTok, Tinned Fish Date Night Is The Latest Viral Food Obsession
By Emma Carey
Deliveroo Is Selling Lotus Biscoff Cinnabons Now
By Darshita Goyal
Get Even More From Bustle — Sign Up For The Newsletter