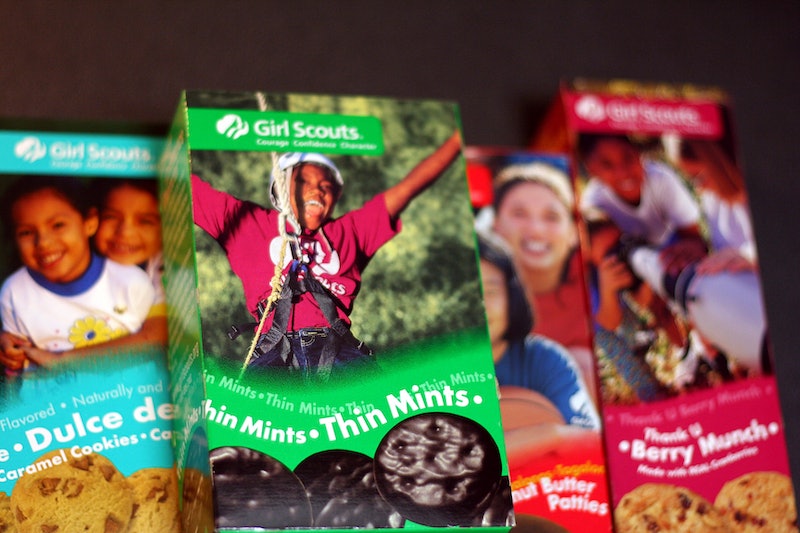 If you've moved around a lot in your lifetime, you may have noticed that Girl Scout cookies can taste totally different based on where you buy them. If you just took it as a reminder of the fallibility of your slowly-deteriorating memory and the inevitably of shuffling off this mortal coil, you'll be excited to know that actually, you were right all along! The recipes for Girl Scout cookies really do differ based on where you live. Can't do anything about that existential crisis, though. Sorry.But wait! I can hear Twitter users crying out. Girl Scouts are a national organization. Shouldn't all the cookies be the same? Isn't it the American Way to provide cheap, standardized food from sea to shining sea?? The answer might actually be more American than McDonald's, because even though the Girl Scouts are indeed national, the children don't make the cookies themselves (am I the only one who believed that for way too long?). The organization outsources the baking, according to the LA Times, which is where the different recipes come in. There are two companies responsible for Girl Scout cookies, and they have different ways of making the cookies. I'll just let that sink in for a second, because that means everything in your life is a lie.

<img alt="" src="https://31.media.tumblr.com/3c22f03012486b9f86551004dd0966e5/tumblr_inline_n9pavjPs3Y1rvnwxu.gif" class="article-body-image" title="Image: https://31.media.tumblr.com/3c22f03012486b9f86551004dd0966e5/tumblr_inline_n9pavjPs3Y1rvnwxu.gif"/>ABC Bakers, located in Richmond, VA, has been baking Girl Scout cookies since 1936, and their Thin Mints are crunchy and extra-minty. Little Brownie Bakers, on the other hand, has been baking with the Girl Scouts for a little over 35 years, and their Thin Mints are richer and smoother, the LA Times reports. Similarly, half the United States doesn't get to taste the deliciousness that is Samoas, because those are only available through Little Brownie Bakers. The ABC Bakers equivalents are Caramel deLites, which has a vanilla flavored cookie and less caramel.

The list of the differences between the bakeries is continued at the LA Times website, where you can also enter your location to find out which kind of cookies you're getting. I'm not saying I'm going to use their map when planning my next move, but I'm not not saying that either.

What? Don't tell me you weren't thinking the same thing.