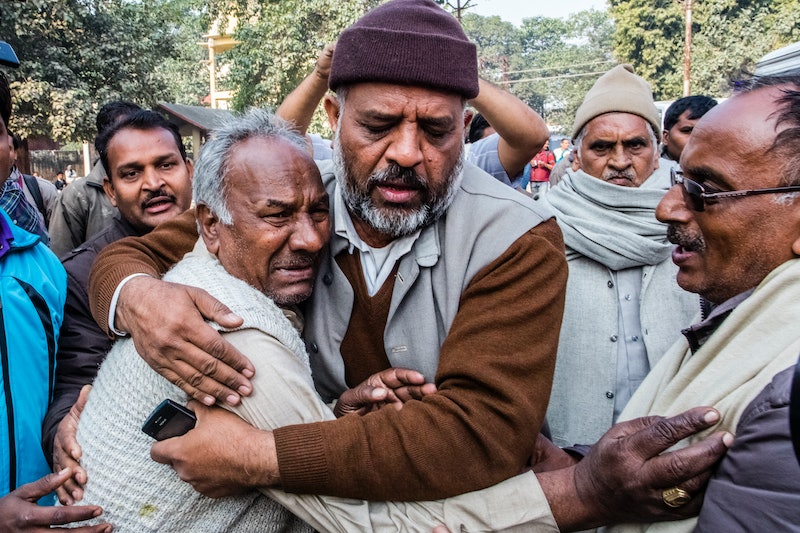 As the death toll from a stampede in India's northern district of Madhya Pradesh rose to 115 Monday, the region's government has been accused of being unprepared for the crowds of worshipers making their way to the Ratangarh temple for the second time in a decade: during the same festival at the same bridge seven years ago, 35 pilgrims were killed by the unexpected release of water from a dam.

According to a state official, roughly 25,000 people were walking across the bridge over the 23-foot-wide Sindh River when a sector of the bridge gave way, triggering a rumor that the entire bridge was about to collapse and, subsequently, a stampede, as people tried to get away. Over 100 people sustained injuries and at least 115 people were killed — 29 of them were kids younger than 12.

But witnesses told a different story: according to survivors who managed to get to safety, the chaos began when police started using canes to control the pilgrims crossing the bridge.

On Monday, the local Congress demanded the resignation of the region's chief minister, Shivraj Singh Chauhan.

"The Madhya Pradesh government needs to take responsibility for this. The chief minister needs to resign," Congress general secretary Ajay Maken said, blaming the government for its unpreparedness.

The sentiment was echoed by Parliamentary Affairs Minister Kamal Nath, who said the district's government "failed," saying he held it "squarely responsible."

"No leaders are being allowed to go there and talk to people because there is more to hide," he said later.

On Sunday, Indian Prime Minister Manmohan Singh expressed his "deep sorrow and shock" at the deaths, saying, "On this day of festivities, our hearts and prayers are with the victims and their families." The Chief minister Shivraj Singh Chouhan later ordered a judicial inquiry into the accident, and is due to visit the site today, as is the director general of police.

More like this
Camilla Paid Tribute To The Queen In A Heartfelt Video Message
By El Hunt and Sam Ramsden
TV Schedules Undergo Major Changes For The Queen's Funeral
By Sam Ramsden
Here’s How You Can Send Your Condolences To The Royal Family
By Stephanie Topacio Long
Elton John, Sir David Attenborough & More Celebrities React To The Death Of Queen Elizabeth II
By Sam Ramsden and Jake Viswanath
Get Even More From Bustle — Sign Up For The Newsletter