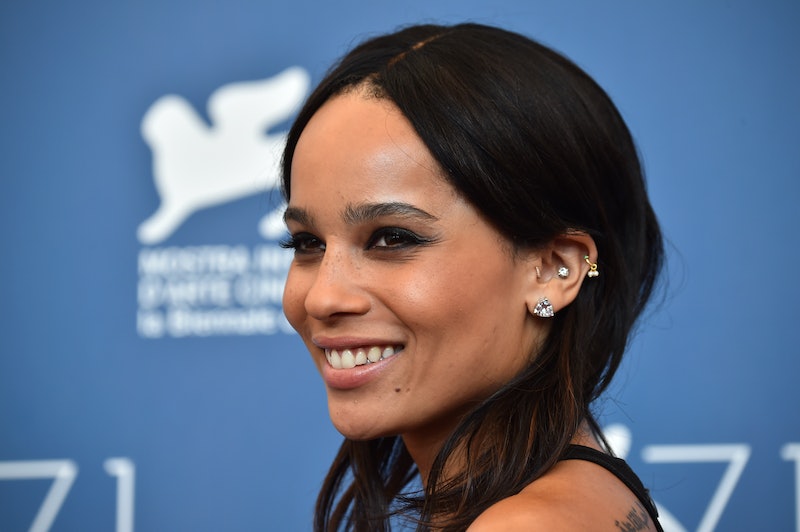 Have you ever tried wearing multiple shades of the same color at one time? Like when Solange wore four different reds to Paris Fashion Week, and pulled it off flawlessly? Well, she's not the only one who can make this look work. Donning 50 shades of frosty purple, Zoe Kravitz's outfit at The Tonight Show Starring Jimmy Fallon was completely stunning, even though it was somewhat bizarre. But obviously, in a good way.

Kravitz joined Fallon for a game of giant beer pong, wearing something that I couldn't figure out at first. The three-piece outfit fell into the frosty lilac color spectrum, ranging from a gray-tone, pink-tone, and an off-white-tone. Consisting of shorts, sheer long-sleeves, an off-the-shoulder top, and a sleeveless, corset-type bodice, the ensemble was something I don't even think I could replicate because I wouldn't even know where to begin! Kravitz styled it all perfectly (duh) with a pair of white strappy heels, a few chunky bracelets, and a silver septum ring.

At first glance, I seriously thought it was her mom Lisa Bonet out there killing Fallon in beer pong. They have the same long tresses and that similarly gorgeous face (one that I need on my face). Also, their combination of chic-and-feminine-meets-edgy-modern is totally the same. Put that altogether with their effortless bohemian style and you've got something that will never get old.

Kravitz appeared on the late night show to promote her new film, Insurgent, and of course talked about her dad, Lenny Kravitz. Check out the video of her and Fallon fighting to the death in the ultimate beer pong challenge.