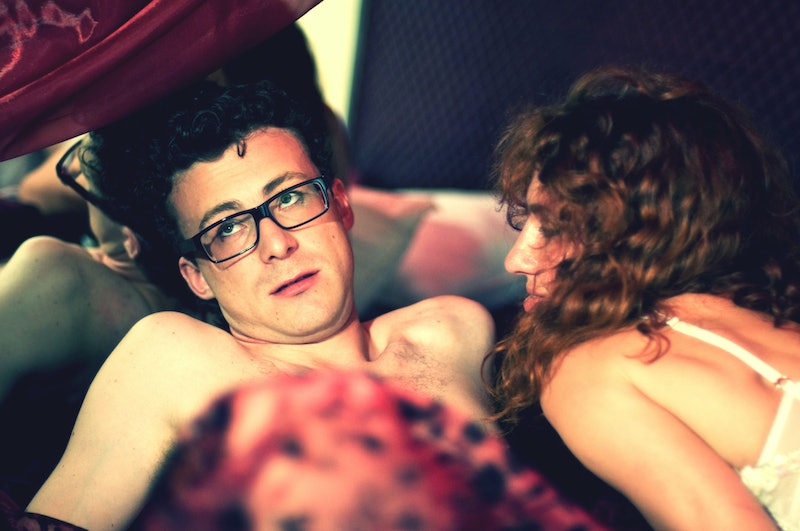 We at Bustle love giving you tips for how to tap into your sexual potential and troubleshoot when things aren’t going your way in the bedroom. But what about finding solutions to those stressful sexual health situations that inevitably crop up when you’re getting down? Emma Kaywin, a Brooklyn-based sexual health writer and activist, is here to calm your nerves and answer your questions. This week’s topic: exactly how antidepressants impact your sex life and libido — and what you can do about it.

Q: I was super depressed, so my doctor prescribed me an antidepressant. I’m now feeling less unhappy, but I’ve noticed that I’m not as sexual as I remember feeling before. Is this something that could be happening because of my new meds, or is something else wrong with me?

A: If you're struggling with depression, you are most definitely not alone. Depression is extremely common — in fact, it's the top reason for disability in Americans between ages 15 and 44. Depression is extremely complex, and scientists don’t really know exactly what causes it. However, it’s understood that depression is associated with neurotransmitters, which are brain chemicals that communicate information between different parts of our bodies. The neurotransmitters relevant to depression are serotonin, norepinephrine, and dopamine.

Depression is much more intense than just feeling sad sometimes — it’s an enduring negative emotion that can profoundly disrupt your life. If that's how you're feeling, antidepressants are a great tool that can help you feel better and be able to live your life in the way you want. However, there are a bunch of different types of antidepressants, all of which interact with your body chemistry differently and can trigger specific side effects.

One of the main side effects that causes people to change or go off their meds is exactly what you’re feeling: a drop in libido. Let's explain why — and what you can do about it.

Most antidepressants change the way you feel by altering the levels of neurotransmitters in your brain. While there are many different types, the main class currently prescribed are called reuptake inhibitors, because they block (inhibit) the reabsorption (reuptake) of certain neurotransmitters into your brain’s nerve cells (called neurons).

Neurotransmitters are interacting with the nerve cells in your brain all the time — that’s how your brain communicates with the rest of your body. When a chemical is blocked from being reabsorbed back into your neurons, it hangs out in the gap between the nerves (called the synapse), making the levels higher in this space. It’s thought that this results in stronger communication between your nerve cells and can improve the way your brain regulates your mood.

Reuptake inhibitors come in three classes: Selective Serotonin Reuptake Inhibitors (SSRIs) are usually the gateway into the world of antidepressants, because they are safer and generally result in fewer side effects, so doctors tend to prescribe them first. SSRIs block your brain’s reabsorption of serotonin. Examples you may have heard of include Prozac, Paxil, and Zoloft.

Serotonin and Norepinephrine Reuptake Inhibitors (SNRIs) work similarly to SSRIs, except they block the reabsorption of both serotonin and norepinephrine. Examples include Cymbalta, Pristiq, and Fetzima.

There are also a couple older classes of antidepressants. These are generally currently prescribed only if the reuptake inhibitors don’t work, because they have more intense side effects. Tricyclic antidepressants (TCAs), also called cyclic antidepressants, affect your brain’s levels of norepinephrine and serotonin by blocking their uptake. The “cyclic” element is about the rings in their chemical structure, not because they run in circles around your brain or anything like that. Examples include Tofranil, Palemor, or Vivactil.

Monoamine Oxidase Inhibitors (MAOIs) were the first type of antidepressants invented. They work by preventing an enzyme called monoamine oxidase from removing norepinephrine, serotonin, and dopamine from your brain, basically boosting the levels of these chemicals for you, which in turn improves brain cell communication and mood. They can be extremely effective in helping people who haven’t responded to other solutions. Examples include Parnate, Nardil, and Marplan. (Something important to note about MAOIs, though, is that certain foods and medications have dangerous interactions with these meds, so if you’re taking an MAOI, you can’t eat cheese or drink tap beer, among other things.)

How Antidepressants Can Lower Your Libido

Since it’s still something of a mystery why depression happens and how certain neurotransmitters affect it, it should come as little surprise that researchers are similarly not completely clear on how antidepressants affect desire. However, it seems that sexual side effects are affected by multiple brain pathways, including an increase in serotonin and decrease in dopamine. Increased serotonin is understood to decrease desire as well as the ability to orgasm.

What we do know is that sexual side effects are extremely common in takers of antidepressants — it’s reported that anywhere from 30 to 70 percent of humans on these meds experience sexual side effects. These can take many forms: Common experiences include difficulty getting turned on or reaching orgasm. Humans with penises can additionally experience erectile dysfunction (not being able to get hard), and those with vaginas can experience dryness or decreased sensation in their special parts.

A recent study found that people taking SSRIs and TCAs not only felt less desire for their partners, but also experienced a weaker feeling of personal connection. The study found that these meds had a gendered response, with SSRIs affecting feelings of love in men more than women, and TCAs affecting those same feelings more in women than men. If you want to geek out on this a bit more, here is a table delineating the effects of many antidepressants on libido.

What You Can Do About It

Disliking the way antidepressants make you feel sexually is the top reason why many people go off their meds. However, if you just ditch your medication, there’s a good chance your depression will return to slam you, which is no good. Researchers have estimated that up to 90 percent of people who experience sexual side effects of antidepressants go off their medication before they should. So before you throw your pillbox out the window, there are some things you can try.

Be a Little Patient

The first thing to know is that sexual side effects don’t always last. Many people find that their libidos improve in around four to six months, as your body gets used to the new chemicals inside it.

Switch Up Your Meds

Often times, libido-related side effects are related to how much of the drug you have in your system. Your doctor may lower the dosage of the drug you’re already on.

You can also switch up the time you take your antidepressant, timing when the medicine is at its lowest level in your system to when you’re most likely to get it on. So, for example, if you tend to get it on at 9 p.m., you might want to take your pill right before you go to sleep at midnight.

Dealing with depression is more than enough on its own, and so experiencing sexual side effects on top of that can end up feeling like a cruel joke. If this is happening to you, you’re shouldering a lot! All at once! All of the things! Too many things!

The first thing to figure out is whether these side effects are bad for you … or just different. The good news is that you don’t have to figure this out alone. Communicate what’s going on to your doctor.

Chances are you don’t have to feel this way — work with a professional to switch up your antidepressant regimen to find something that works for you. And never forget: you are an equal partner in your own care. Just because you don’t know all the science behind why something does or doesn't work doesn’t mean you don’t know just as much about your body as your doctor does.