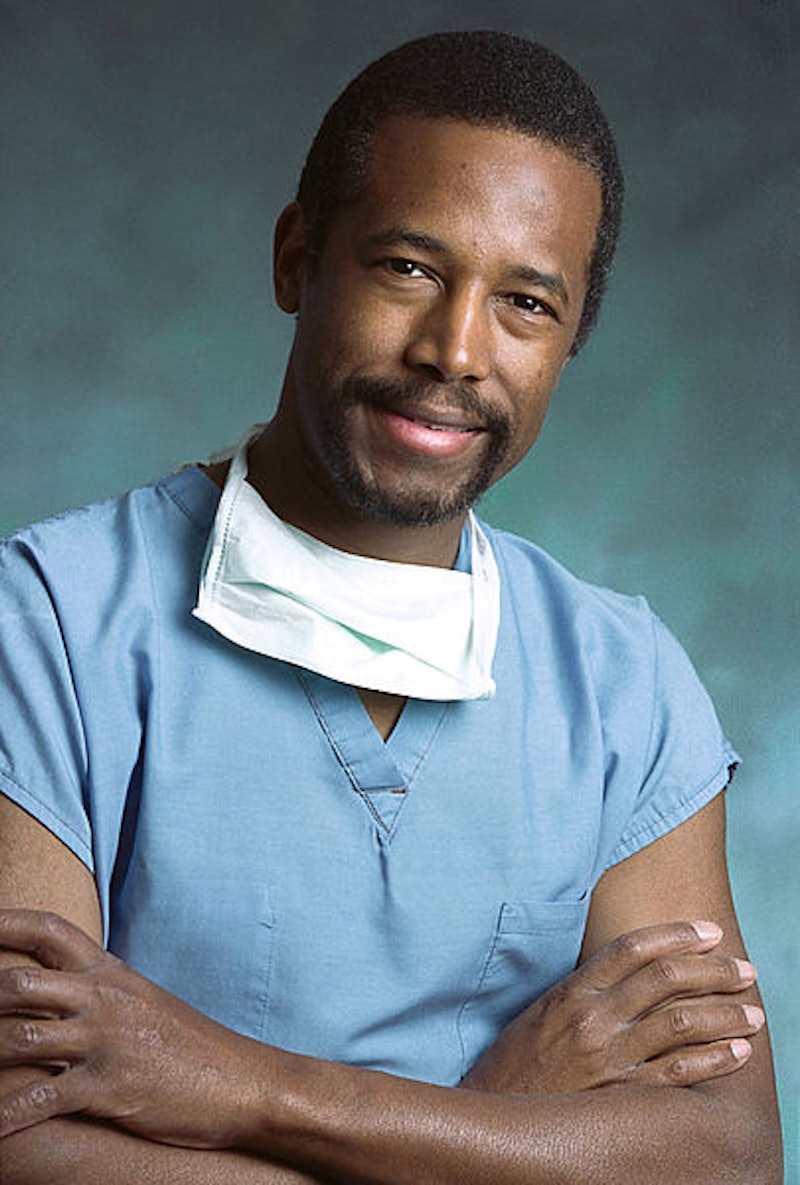 Fox News is totally trolling us with new pundit Ben Carson, a retired neurosurgeon turned talking head who looks like he could be on Grey's Anatomy. Carson is known for pioneering the first separation of twins conjoined at the head and was awarded the Presidential Medal of Freedom by George W. Bush. Now he opines on things like Obamacare ("worst thing since slavery") and reproductive rights.

Social commentary isn't new for Carson, who has published four books with a Christian media company (two about his personal success philosophies and two autobiographies). He has debated Richard Dawkins about evolution. There was a TV movie about him called Gifted Hands that stars Cuba Gooding Jr. (that last bit is obviously unrelated to social commentary but I just thought you should know you can watch it on the Lifetime Movie Network).

It seems that Carson's widespread public image has been mostly about his work as a pioneering scientist and his conservative Christian commentator thing is kind of a side project. This year he's switching things up. He retired in May and then joined conservative Newspaper The Washington Times as a columnist. He's also been giving a lot of talks, including one at the Value Voter's Summit in Washington, D.C. on Friday. Here's what he had to say about women, via Raw Story:

"Your health should be controlled by you and not by the government. But when we’re talking about things that are important, life is important. And that includes the life of the unborn, also. You know, there are those of us in this society who have told women that there’s a war on them because that cute little baby inside of them, they may want to get rid of it and there are people that are keeping you from doing that. And women say, ‘No, no, they’re not doing that to me! No!’ And they get all riled up. They think that somebody's depriving them.

Let me tell you something, there is no war on women. You think about it, when a woman is pregnant what happens? People get up and give her their seat ... there is no war on them, the war is on their babies. Babies that cannot defend themselves.

[...] What we need to do is re-educate the women to understand that they are the defenders of these babies.”

In the matter of minutes, Carson says women don't need the government telling us what to do with our bodies — we just need men like him to "re-educate" us about how OMG babies are, like, so cuuuuuute. No-matter how you feel about abortion, it's pretty awful and patronizing. Sweetheart, if you could only just focus a little more on this cuteness, maybe you would stop getting so riled up about little things like reproductive rights. Obviously women don't come to moral or political decisions about abortion through reasoning or ethics, let's just show them ultrasound photos and tiny shoes.

Unfortunately, we can expect to hear a lot more from Carson soon. Fox News announced last week that it hired him as a contributor. Chairman and CEO Roger Ailes said Carson has a "broad perspective on what's going on in the country" and will make "a major contribution to our network."