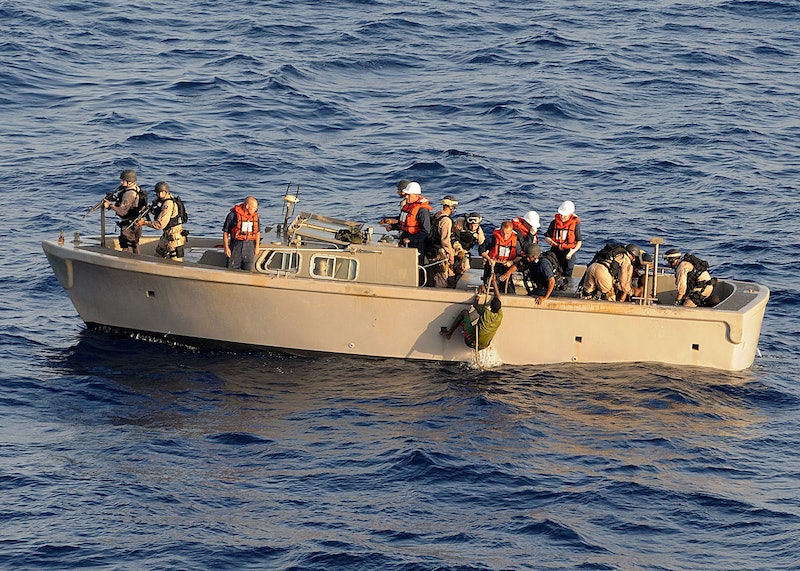 A notorious Somalian pirate leader turned quasi-diplomat, often known as "Big Mouth" or "Afweyne", has been arrested and is now in Belgian custody pending charges.

Mohamed Abdi Hassan — who has been described by the United Nations as "one of the most notorious and influential leaders" in Somalia's pirate community — is thought to have worked for years off the East African coast, and made millions of dollars out of ransom payments. He's believed to have been part of the 2008 capture of the Sirius Star oil supertanker, which was exchanged for a ransom of several million dollars. He also captured a Ukrainian transport ship carrying Soviet-era battle tanks, which was released only have 134 days — and a cool three million dollars.

But Big Mouth decided to leave piracy earlier in 2012, as part of a deal brokered by the Somali government. Somalia’s then president, Sheikh Sharif Sheikh Ahmed, reportedly offered the pirate amnesty, as well as a diplomatic passport, if he agreed to repent his actions publicly and encourage other pirates to do the same.

In January, Hassan announced his retirement at a news conference, saying: "From today on I will not be involved in this gang activity. I have also been encouraging many of my colleagues to renounce piracy too, and they have done it."

He is being held by Belgian authorities in Bruges, after being detained coming off a flight from Nairobi. Details about his charges are expected to be announced by the federal prosecutor in a news conference later today.

In 2011, piracy in Somalia cost the world economy roughly $7 billion, and it's estimated that the pirates themselves made roughly $160 million working the Gulf of Aden and the Indian Ocean. As of now, more than 77 hostages are still held by Somali pirates.