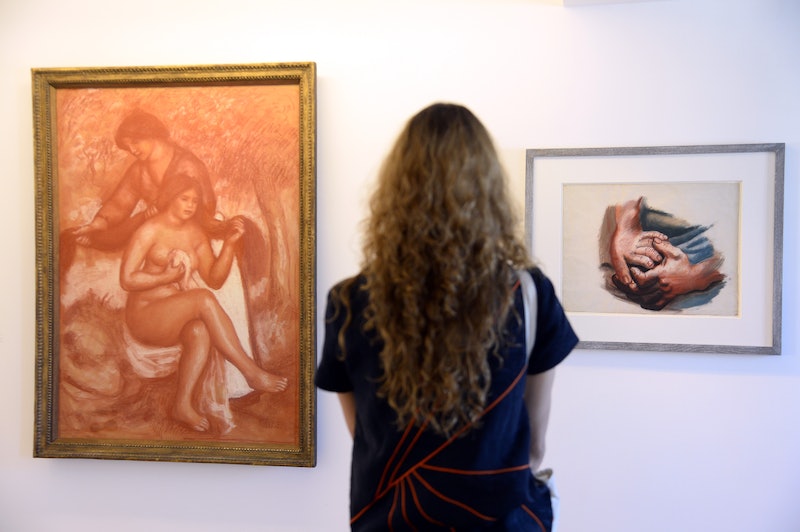 You all know the drill: post anything that could be construed as "pornographic" on Facebook, and you'll get warned or banned permanently — even if it's art. Frustrated by this rule, a French teacher sued Facebook after he was banned from the site for posting Gustave Courbet's 1866 painting "The Origin Of The World," which depicts a woman's vagina. In a groundbreaking decision, a French court ruled that Facebook can be sued if it tries to censor content, which will likely have lasting implications on censorship in social media as a whole.

Don't get me wrong, it's great Facebook has cracked down on sexual bullying and abuse on its site, but banning educational or body positive posts about sexuality or reproductive health only further stigmatizes female sexuality. I say female sexuality because most posts that get reported are about women, because even a glimpse of the female form will turn children into depraved monsters and send us all straight to hell, amiright?

In solidarity with the women (and men) who believe that the female form — and the vagina in particular — is natural, normal, and should be celebrated, here are eight beautiful depictions of the vagina in art. It's pretty safe to say that most of these would not be welcome on Facebook, so repost this article with caution. On second thought, maybe just stick to Twitter.

A grown-up goth's favorite, Mark Ryden's pop surrealist paintings are at once whimsical and dark. He is known for depicting girls with cartoonish forms and sorrowful eyes — the stark scene in "Sophia's Bubbles" is both serene and sensual.

Figurative Austrian painter Egon Schiele showed women at their most raw and expressive. His nudes are both otherworldly and unsettling while maintaining a true-to-life energy.

Between 1974 and 1979, feminist artist and activist Judy Chicago created a triangular table with sculptural place settings for 39 mythical and real women, from Sojourner Truth and Virginia Wolf to Kali and Hatshepsut. Chicago's exhibition of "vagina plates" is currently on permanent display at the Elizabeth A. Sackler Center For Feminist Art at The Brooklyn Museum.

Tracey Emin is a multi-media artist who is known for confessional, confrontational work. Her wealth of output is both conceptual and realistic, and often delves into eroticism and the inner emotional lives of women — as "Good Red Love" does.

Austrian Symbolist Gustav Klimt is one of the most lauded artists of his era. He was often criticized for being too pornographic — because the nude female form has been making waves since time immemorial — although his works are still beloved by critics and historians alike.

Chakaia Booker creates wearable sculptures to objet d'art designed from old tires that she repurposed from construction sites and junkyards. Her multi-layered, allegorical works like "Never Mind" delve into complex intersections of race, class, and gender.

Lucas Cranach the Elder was a German Renaissance painter who often painted nude, historical subjects. He was also a court painter, and produced images of many major figures in the Protestant Reformation — including Martin Luther himself.