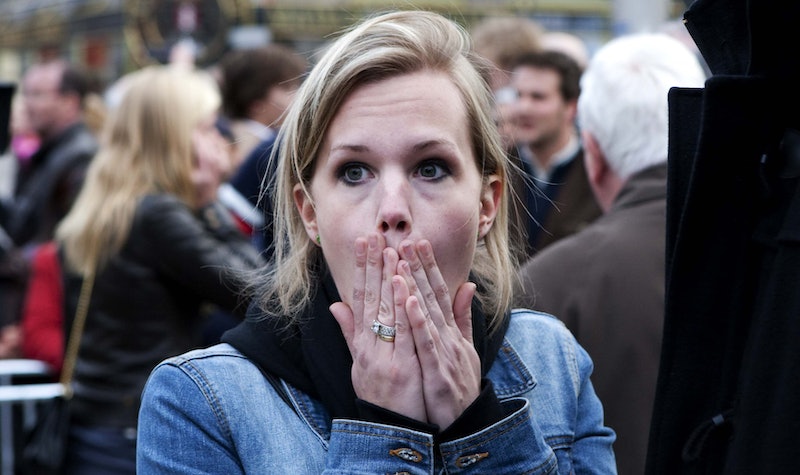 In a way, despite the fact that the whole goal of them is to scare us, ghost stories are really fun to swap because it's a little exciting. The thrill and fear that jumps up your throat and spiderwebs throughout your whole body. Ghost stories give us a tiny spike of adrenaline while bringing up a whole heap of questions: How could we possibly be the only beings taking up space on this plane of existence? How do we know our reality is the only one and there aren't infinite realms coexisting within our own? Sure, we're all mostly inclined to think that ghosts don't exist, but how do we really know? And maybe most importantly, what the hell was that squeaking noise in my apartment at 2AM? To be real, these questions are a huge part of the reason why I constantly own an animal; I need to have a safe party to absorb the blame I might otherwise assign to ghosts. Because I am an adult who society allows to vote.

Well, here's a new reason to worry: A little girl named Lexi was playing a regular, innocant game of peek-a-boo with her family, who naturally filmed the game, because that's what you do when you have kids. It was NBD—until it became a VBD (very big deal). In the video, as Lexi moves her hands from her eyes, an invisible force seems pulls her up and back, before knocking her onto her butt on the floor. Ready for absolute creepiest part? Her father wrote when Lexi landed, she said, "naughty boy," a phrase the child usually reserves for when the family cat misbehaves. So what or whom was she talking to? I NEED ANSWERS. THIS IS SO UNSETTLING.

The footage is fuzzy and we weren't actually present in the room when this happened, so a lot of mystery remains. Apparently, though, the family has since said they noticed a lot more ambient, unexplainable noises throughout their house. Um. NO KIDDING. House settling noises are real but if you saw freaking evidence of a ghost in said home interacting with your child? I do not get how that wouldn't be reason enough to move. In other news, I will be playing A Bug's Life on loop each night until further notice in hopes I can forget this truly terrifying video.