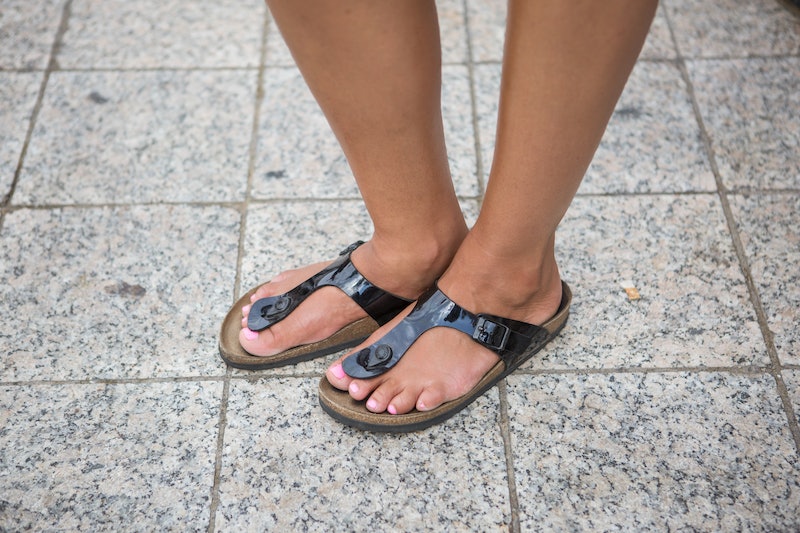 Eva Chen isn't the only fashionista to proclaim her love for Birkenstocks on Instagram, but she's the majority of the reason I'll be shopping the major Birkenstock sale at Nordstrom Rack this weekend. For a unknown limited time, the fashion retailer is offering huge markdowns on the comfy-chic normcore sandals. Many are even under $100!

The popularity of Birkenstock sandals resembles something of an inverted bell curve. The brand first launched their sandal in the late 1960s, but they gradually became less popular in the 1980s. In the late 1990s and early 2000s, the shoes made a comeback and were deemed more fashionable than ever, but they've had a major resurgence in recent months, thanks in large part to Eva Chen's eternally stylish Instagram account. The Lucky editor-in-chief is a huge fan of the ugly-chic footwear. And thank goodness, because I still have a pair in the back of my closet begging to be dusted off and worn with socks.

In case you still have a case of seasonal depression — and who could really blame you with all the snow continuously being dumped on us from above — sandals aren't the only style of Birkenstocks you can scoop up at Nordstrom Rack on the cheap. Various flats, tennis shoes and close-toed sandals, and clogs are also marked down! If you haven't revisited the trend yet (and really, what are you waiting for?), shop the sale now! I, for one, am pretty amazed that Birkenstocks did not go the way of the dinosaur, but instead have improved with time.

More like this
Prefer Alcohol-Free Perfumes? Water-Based Fragrances Are On The Rise
By Audrey Noble
15 Chrome Nail Polish Colors For An Easy, Mirror-Like Manicure
By Audrey Noble
The Beauty Industry Disrupter From Dallas
By Jordi Lippe-McGraw
10 Corsets That *Actually* Work For Big Boobs
By Bella Gerard
Get Even More From Bustle — Sign Up For The Newsletter