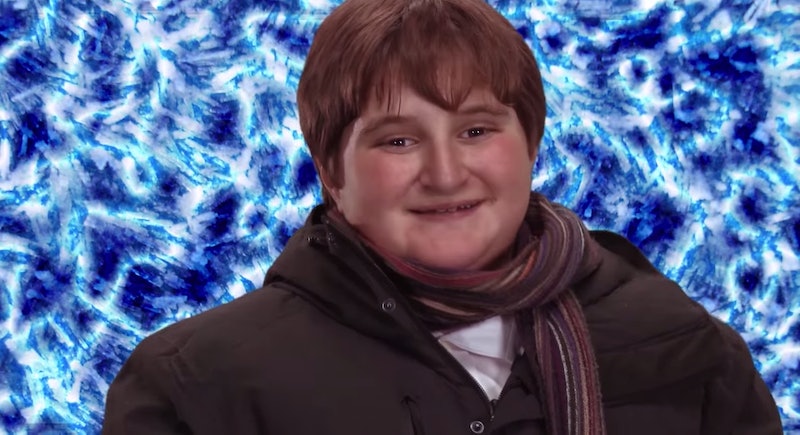 I don't trust anyone who says they enjoyed middle school. For most of us, early teen years are designated for character-building social torture coupled with a long-pour of crushing self-doubt. We're learning who we are and that takes time and various emotional battle scars. But then there's the occasional, absolutely advanced creature who skips the whole mortifying ordeal of becoming comfortable with their true self. They have no reservations in proudly revealing unique character facets during a time when everyone else strives to conform to the homogenous standard of normal. Illinois teen Brody Criz falls into this super impressive category of human, as proven in this video invitation for his bar mitzvah.

Criz nails a Rihanna-level of swagger while performing a mash-up of covers including Pharrell, Robin Thicke, Lorde, and the Frozen soundtrack. Xpress Video Pro orchestrated the whole she-bang, which includes cameos from the whole Criz clan: An enthusiastic pair of parents, his limelight-loving little sister, and his clearly angsty older brother. It's a delight they talked the entire family into participating in, but it's really soon-to-be-man Brody who truly shines as the video's star. The way he takes on this role with gusto and zero hesitation is mad inspiring.

So Brody just officially upped the bar in bar mitzvah invitations. When I was in middle school, the only bar mitzvah invite I got was from a kid who got his whole family to jump on a rap song which came burned onto a CD also sporting an image of him leaning in a suit and sunglasses, posing all gangster-style. The CD also contained a few Snoop Dogg numbers. I was impressed then but like, kids these days. Wow. I'm floored over here, guys.