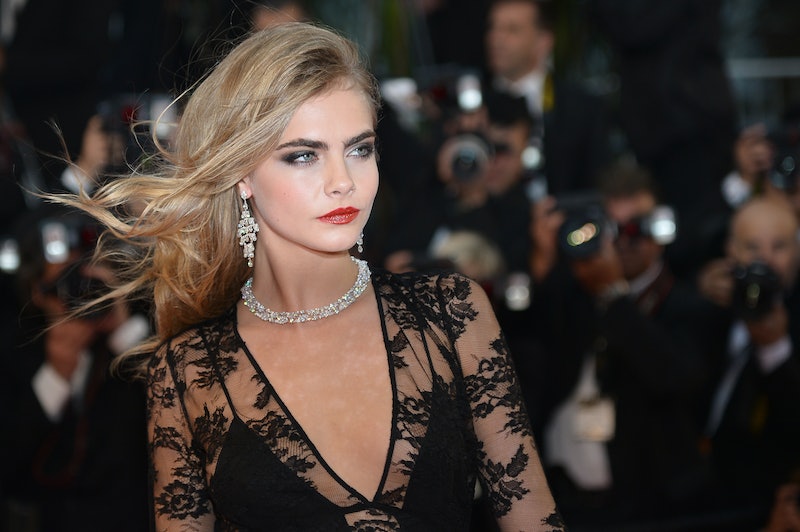 Cara Delevingne just made pizza look impossibly stylish — and no, she didn't wear yet another pizza onesie. The supermodel/actress/singer posted a picture to her Instagram account of a Cara Delevingne pizza that was made to look like her face. The photo, which has now received over 380k likes, is so cool that it definitely beats that Joan Didion for Celiné Rice Krispie dessert we saw on "man repeller" Leandra Medine's account last week. Although the sugary Joan was seriously impressive, I think Cara D's food selfie takes the, um, cake.

Delevingne's love for pizza is very widely known. If her constant quotes about the most addictive food of all time aren't enough, according to her Instagram feed, she may have worn her infamous pizza onesie more times than she's walked in runway shows. The actual pizza pie featuring her likeness was made using banana peppers, black olives green peppers, green olives, pepperonis, and white sauce — you know, just a few of her favorite things.

But this post is leaving the world with so many questions. Where did she get this masterpiece? Who made it for her? Did she it eat? Did she share or is she a big enough fan of pizza to finish it all by herself? To help, I've developed some plausible ways this specially designed pizza may have found its way into the supermodel's hands (and probably mouth).

Because only Delevingne could pull off haute couture food. Fashion designer and legend Karl Lagerfeld has an amazing relationship with the supermodel, so much so he has been called Delevingne's uncle. I wouldn't be surprised if Lagerfeld sent this custom-made pizza to the busy model-turned-actress as a gesture of care.

Delevingne is gorgeous and mega-famous. She has millions of fans. Perhaps this pizza was given to her by a fan who knew her love of the food and also every intricate detail of her face. Creepy, but delicious.

With her new triple-threat status, Delevingne is traveling a lot, potentially making relationships at home difficult. Maybe some close friends of hers pitched in and paid to have this glorious creation delivered to whatever hotel she's staying in this week.

Delevingne endorses many fashion, beauty, and retail brands. Perhaps a pizza campaign is next in line?

Although she's not walking in many shows this month, I'm sure she's backstage supporting her friends and favorite designers. Fashion month is a busy and stressful time for models, even if they're staying on the sidelines.