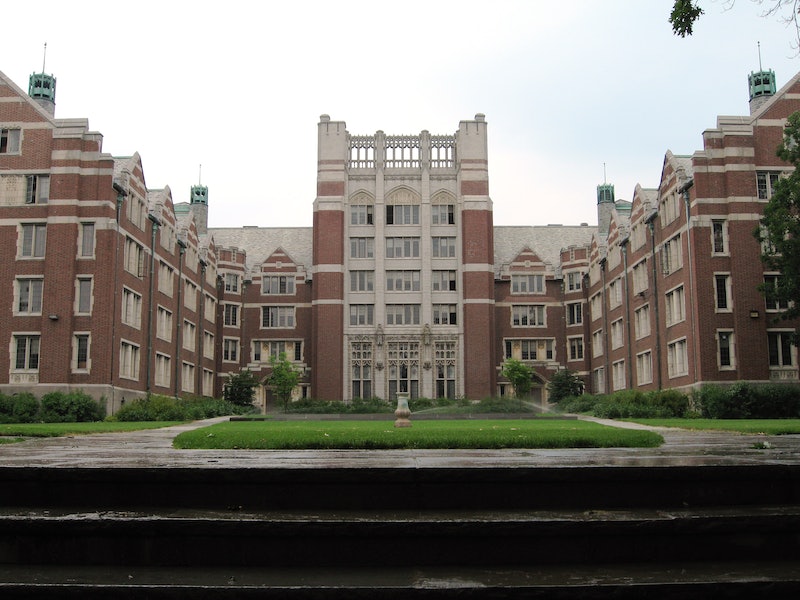 Attention, for I come to you today with good news! Wellesley College, an all-women's school, will now allow trans women to enroll. Isn't it nice when progress happens? Go Wellesley!

Traditionally, women's colleges in the United States have been open only to women who are cis gender, or assigned female at birth. This is still the case for most of the women's colleges across the country — although the standard is finally beginning to change. Hallelujah!

As Wellesley's president and board of trustees wrote in a letter to the community following their decision on Wednesday, “The creation of Wellesley College was a revolutionary act, challenging and confounding entrenched views about the roles and capacities of women." In keeping with that mission, they explained, "Wellesley will consider for admission any applicant who lives as a woman and consistently identifies as a woman." In other words, all women are welcome, trans women included.

Like I said, today is a pretty good day. Because let's be honest: There is nothing progressive about any understanding of gender that conflates a person's gender identity with their genitalia. By rejecting this notion, Wellesley and its fellow trans-inclusive women's colleges are not only fulfilling their mission to provide quality to education to women, but also pushing back against the harmful idea that women are nothing more than our biology. Which is awesome.

Under Wellesley's new policy, trans men will not be allowed to apply to the school, though students who come out as trans men and transition while enrolled will be allowed to stay at the college and to graduate. The school will also admit students who were assigned female at birth but identify as neither male nor female.

Wellesley is the fifth women's college in the US to formally allow trans women, the others being Mount Hollyoke, Simmons College, Bryn Mawr, and Mills College. Hopefully, the list will continue to grow; women's colleges have historically been important for activism and feminism, which today should include consideration of trans issues.

For most of American history, men-only colleges were the norm. Princeton did not become co-ed until 1973; Columbia's undergraduate program waited until 1983. Women's colleges were therefore important spaces for women to not only get quality education, but to come together in solidarity. Today, when co-ed campuses are the norm, such colleges can still be important spaces for empowering women. But if the schools fail to update their ideas about gender and womanhood, that mission will undoubtedly suffer. So the fact that such schools are beginning to open up to trans women — who are also arguably the population most in need of the type of safe space women's college historically provided — is awesome.

Congratulations to Wellesley, and here's hoping many more follow your example!

More like this
The 19 Best Tweets & Memes About Bisexual Awareness Week
By Lexi Inks
Black Women's Equal Pay Day Highlights An Upsetting Problem
By Brandi Neal
An Honest Review of MeUndies Boxers, According To A Non-Binary Person
By Megan Lasher
Pro Footballer Zander Murray Is "Blown Away" By Support After Coming Out
By Sam Ramsden
Get Even More From Bustle — Sign Up For The Newsletter