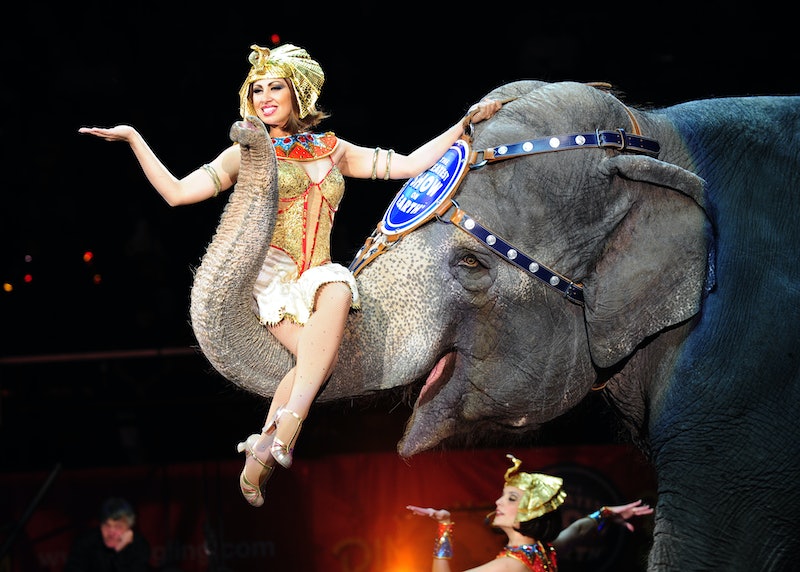 The Greatest Show on Earth totally just got a little bit better. Ringling Bros. and Barnum & Bailey Circus are putting an end to their elephant acts that have garnered a reputation for being cruel and abusive towards their starring pachyderms. Bring in the clowns, it's time to celebrate! And what better way to show off your support for the soon-to-be-free elephants than with these elephant-inspired looks that'll have you looking like the star of the show.

Feld Entertainment, the parent company of the Ringling Brothers Circus, came forward to The Associated Press stating that their controversial elephant acts will be fully phased out by 2018, after public pressure was put on the company following the release of several videos of circus workers aggressively beating the elephants with bullhooks until they bled, confining them to boxcars for days on end, and separating mothers from their babies. Within the next three years, the circus' 43 elephants will all be living happily and peacefully at the Center for Elephant Conservation in central Florida.

So how can you celebrate this new victory in wild animal welfare? While gorging on cotton candy, popcorn, and other circus treats certainly sounds appropriate, stealing some fashion inspo from these gentle giants sounds even sweeter.

More like this
15% Pledge Director LaToya Williams-Belfort On The Impact Of Supporting Black Business
By Dominique Norman
Berriez Founder Emma Zack On Her Size Inclusive NYFW Show
By Dominique Norman
Prefer Alcohol-Free Perfumes? Water-Based Fragrances Are On The Rise
By Audrey Noble
12 Absolutely Angelic Cherub Tattoo Designs
By Paris Giles
Get Even More From Bustle — Sign Up For The Newsletter