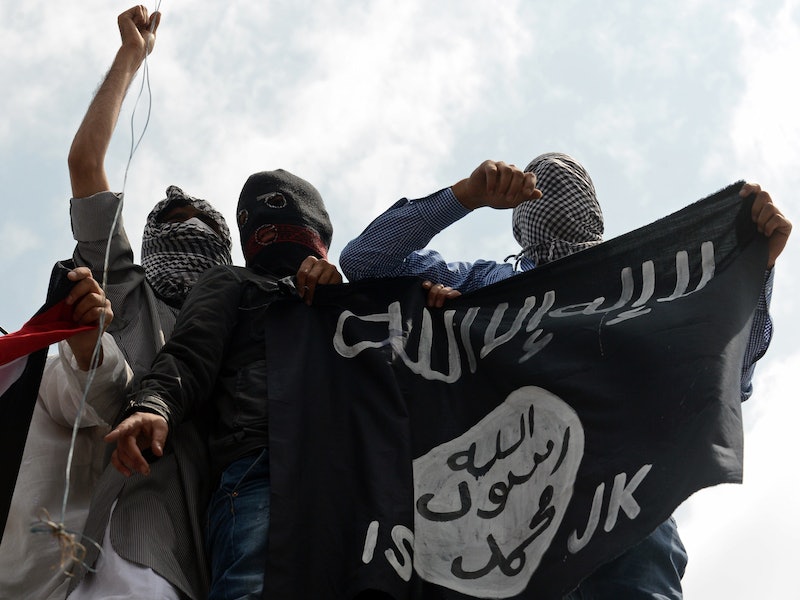 By now you may have caught wind of the ISIS-themed wedding video that's currently making its way around the Internet. It was uploaded to Facebook on March 3 and has since circulated via YouTube, and… well, yes, most of people who have seen it are up in arms about it. I am one of them. I don't often get super rant-y about the things I write about; even when I find things extremely rage-inducing, I try to stay at least somewhat measured with my responses. I found that extraordinarily difficult to do in the case of this story, though. I'll do my best, but forgive me if I fail.

The video, which was shot during a wedding in Egypt, features a simulated kidnap of the bride and groom by ISIS militants. There are masks. There are knives. There are guns. There is a cage like the one in which Jordanian pilot Moaz al-Kasasbeh was burned alive by ISIS just last month. And there is dance music, and a disco ball, and… I almost don't even know what to do with it all.

HERE IS A BIG, HUGE WARNING LABEL: This video is so difficult to watch that I had a hard time sitting through it even once, let alone enough times to be able to write about it. It would be perfectly understandable if you did not want to watch it, so if you'd like to skip it, scroll down past it. I do have to include it, though, so here it is:

As I mentioned before, the wedding happened in Egypt. Is it possible that I'm missing some cultural context? Sure. Is it also possible that this wedding video was never meant to end up on the Internet? Of course. But I don't think the problem here is matter of a cultural misunderstanding; it's a common human decency thing. In any event, though, what I keep coming back to is this: On what planet does it sound like a good idea to turn a terrorist organization that has killed countless innocent people, and made sure that the world is watching while they do it, into... a party? To say that “That is not a party” would be one of the biggest understatements in the history of understatements.

Although, as Jezebel's I Thee Dread blog noted, “There is no social context for this event, no lens of cultural relativity through which we might fairly view such a wedding. It exists beyond all boundaries,” there do seem to have been some gaps in how we've understood it. ThinkProgress was able to get in touch with the wedding photographer and the bride, both of whom attempted to explain what the groom was going for; I'm not sure how successful they were in their explanations, but here's what they said. According to photographer Ahmed Kassem, “The idea came to the groom" — who, like the bride, photographer, and all their friends and family, is extremely anti-ISIS — "a few days before the wedding. [The idea] was to send the message that we don't [feel] afraid from [ISIS] or anyone.” The idea was apparently to make a “special wedding” for “his girl.” Said Shymaa Mohammad Daif, the bride, “It was actually a surprise for me. At first I didn't understand what happened by then I was satisfied about it.” The message, she said, was this: “They came to the world by terrorism and murder, but our fun and smile will fight ISIS. A cage of murder will be broken by Egyptians and they will dance and never be scared.”

With these pieces of context, the intentions sound like they were… well, perhaps not good, but somewhere in the neighborhood of good. However noble they were, though, the end result is still the same: Misguided. But not because it shows joy in the face of fear; the desire to prove that joy and happiness trumps fear and terror may perhaps even be commendable. Rather, it's misguided because it makes light of all the people who have died at the hands of ISIS. That is the thing about this whole debacle that I'm finding so difficult to get past.

Here is the UN's report on how many people ISIS has killed. Here is a list of beheadings perpetrated by ISIS.

This is why an ISIS wedding is so unfathomable.