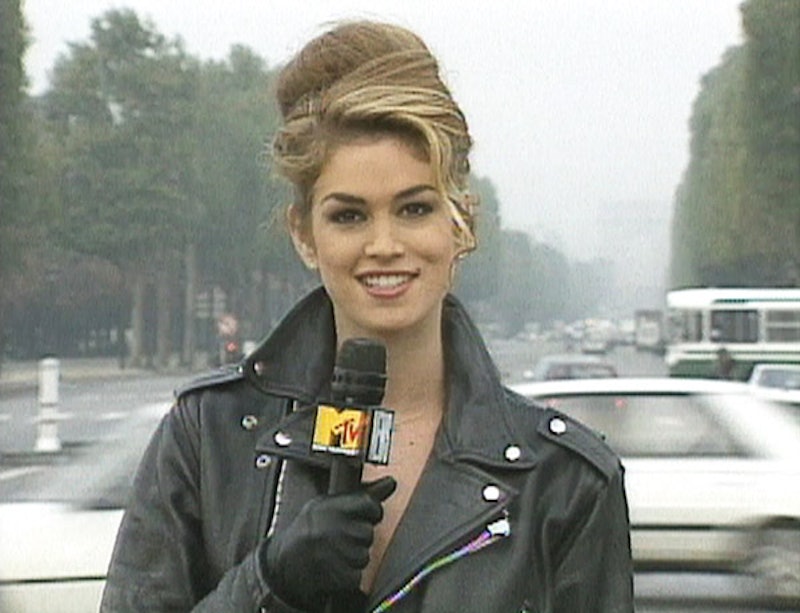 I worshiped MTV's House of Style growing up. I watched it religiously for the fashion, long before I bought my first copy of Vogue. Supermodel Cindy Crawford was also everything that I admired as a TV host — beautiful, confident, and relatable, even while she was constantly surrounded by expensive clothes, high-end designers, and other models. Aside from Crawford, there are several reasons why House of Style is one of the most memorable TV shows from the '90s and how it continues to influence so many of today's designers, editors, bloggers, and anyone fashion-obsessed.

House of Style premiered during the height of the "supermodel" era, led by Crawford, Naomi Campbell, Linda Evangelista, and Christy Turlington. The show gave viewers a glimpse of what these women were like on and off the runway, as well as the designers responsible for the gorgeous clothes that they wore. But House of Style went beyond models and clothing. The show brought the world of high-fashion into our living rooms and made it fun, even accessible, with tips on how to recreate runway looks for less, DIY projects, and candid celebrity interviews. Crawford left the show in 1995 and handed the hosting reigns over to other top models, including Daisy Fuentes, Rebecca Romijn, Molly Sims, Amber Valleta, and Shalom Harlow. House of Style lasted until 2000 and was shortly revived in 2009. It's currently produced as a web series for MTV.com hosted by Iggy Azalea. Nevertheless, everyone loved the original House of Style and here are the top five reasons why:

Sure, she wasn't the most polished host and interviewer. Crawford never let her supermodel status get in the way of having fun and being silly in front of the cameras, like in the clip below where the host grocery shops with rap group Onyx. There's a reason why out of all the show's hosts, Crawford's name has become the most synonymous with House of Style.

2. It was a fashion, travel, and lifestyle show all-in-one

House of Style often traveled to the world's most fashionable cities, including this one shot during Paris Fashion Week. The episode features an interview with Jean Paul Gaultier, supermodels Linda Evangelista and Naomi Campbell stomping down the catwalk, and De La Soul and Marky Mark on the soundtrack. Did I mention all of that happens in the first 30 seconds? There are also tips on how to get "that look français," which apparently means owning a small dog, a train case, and red nail enamel, among others.

3. It covered celebrities and pop culture

File this under: the most awesomely '90s thing you will watch today. The show visited Will Smith on the set of The Fresh Prince of Bel-Air and it includes Air Jordans, shoulder pads, Smith's colorful wardrobe, and Crawford's attempt at beatboxing.

A makeup-less Naomi Campbell talking about zits at the :45 mark.

Designer Todd Oldham became a regular fixture on House of Style because of his unique and clever DIY projects, helpful life hacks, and eye for creative yet affordable fashion. He also attracted more male viewers to the show.

To sum it up, MTV needs to bring Cindy back!