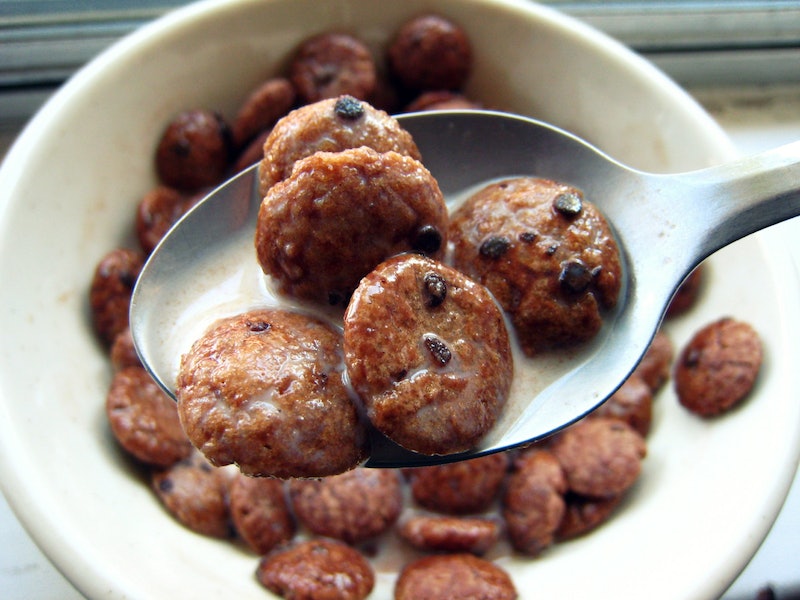 Surprise! Today is National Cereal Day, and that means it's time to celebrate... by taking a quick trip down memory lane. Ah, the '90s... it was a simpler time. Fruit drinks were considered healthy just because they had a picture of fruit on the bottle. Everything was neon. Men had frosted-tip hair. And breakfast was a lawless mealtime with an unregulated amount of sugar and artificial colors. All we needed was some milk (when it used to be produced from cows and not nuts) to make our first meal of the day complete. Not that we'd even finish the milk, I mean, once the marshmallows were gone, breakfast was over.

As kids in the '90s, our lives were centered around TGIF, catchphrases from Clueless, scrunchies, and amazingly sugary foods. We could start our day with basically a bowl of candy, suck sugar out of a juice box straw, and mix it up with salty deli meat on white bread with a side of Gushers, and then a dessert made of Twinkies and/or brownie bites. It was... probably the start of our current obesity epidemic, but whatevs! It was America in the '90s and we had bigger concerns outside of our health — we wanted Ross and Rachel to end up together. But in honor of National Cereal Day on March 7, let's relive some of the delightful cereals we used to know.

Oh, good to know they were sweetened, because I would've been concerned about the lack of sweetness per box.

Pop Tarts apparently weren't good enough on their own in s'more flavors and extra frosting, they needed to be bite size, and they needed milk. Duh.

In the late '90s, the recipe was changed and the taste changed somewhat dramatically. But '90s kids still cherish the cookie goodness of chocolate chip cookies the size of marbles drenched in milk.

Out of all the toast crunches, they had to get rid of this one? They did bring it back late last year, but we went too many years without it filling our bowls. I guess I'm still a little sour about this one.

I guess cinnamon was a trendy flavor back in the day. Is this spice just not cool anymore? Psh. I refuse to accept that. But these were pretty delish at the time.

Teddy Grahams were the top afternoon snack of '90s kids across the country, so it only makes sense that they gave it a breakfast makeover. They were somehow rich, dry, and glistening in sugar and cinnamon, all at once. Milk only enhances the flavors.

Why were we OK with our first meal of the day being delivered by a supernatural monster? Because it it was chocolate-flavored with tiny marshmallows?? Well, I guess that's reason enough.

So, just what the hell were these? Were they supposed to resemble those gas station cakes? Where they patriotic? What's with the genie? None of it makes any sense as an adult, but as a kid in the '90s, I saw sprinkles and I. WAS. IN.

Snap, Crackle, and Pop were the trendsetting icons before the Kardashians made their marK. Plus, it was always fun to listen to the music of your first meal of the day before shoveling it into your mouth, right?

More like this
10 Pumpkin Recipes That Are Way More Creative Than Pie & Lattes
By Rebecca Deczynski and Alexis Morillo
14 Last-Minute Halloween Costumes That Only Require A Flannel Shirt
By Kirsten Nunez
64 Genius Gift Ideas For Every Single Guy In Your Life
By Teresa Newsome, Mia Mercado and Brittany Leitner
12 Easy Halloween Costumes You Can Wear With A Denim Jacket
By Kirsten Nunez and Bustle Editors
Get Even More From Bustle — Sign Up For The Newsletter