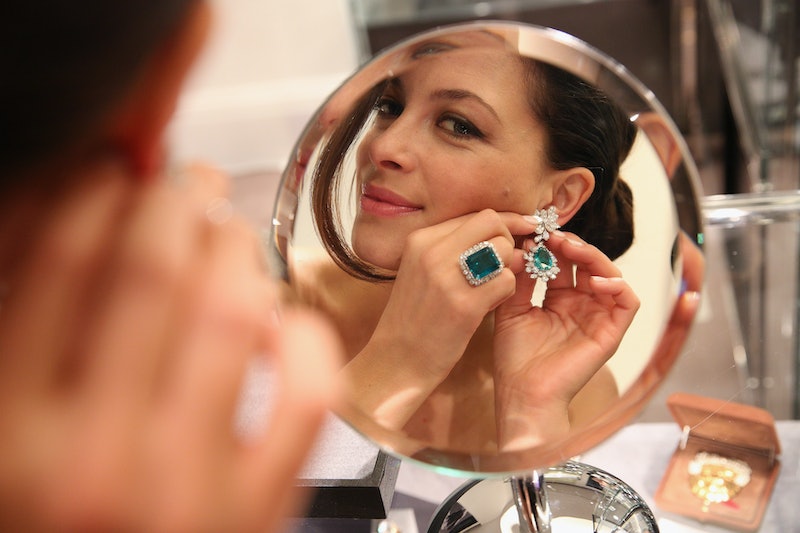 If real beauty is on the inside, then someone needs to tell that to a certain dating site. BeautifulPeople.com recently kicked over 3,000 people off the dating service for falling down on the very important job of staying hot. Which is an awfully unattractive move, really.

BeautifulPeople.com has a fairly straight forward purpose: To connect very attractive single people "who actually look in real life as they do online." Members vote on who they allow to join the site, and once you're in, it seems you're not allowed to look anything less than your best. The 3,000 people booted off the dating site were apparently mostly cited for gaining weight or "graceless aging." Because I guess developing wrinkles is a crime?

“This may sound harsh, and it is the most difficult part of managing the business,” a statement from BeautifulPeople.com’s co-owner Genevieve Hodge said. “We take no pleasure in removing members, but it is a necessary evil in order to maintain the beautiful community and our prized business model.” The booted members will be able to reapply for membership, so at least there's that. I guess.

And just to prove that this site really is populated by the kind of vapid humans you imagine, it seems lots of members approve of the mass elimination. Tawnie Lynn, a member from Los Angeles, told the Daily Mirror, "If the management failed to maintain the quality of the site by polluting the gene pool, most members would leave.... It would make Beautiful People just like every other dating site — full of the kind of people you wouldn’t want to share an elevator with, let alone date."

Aside from the fact that I get the impression this site is endorsing distinctly white, Western beauty standards on its site, especially given the fixation on weight, it's still a fairly gross premise for a dating site. I mean, I know it's kind of a cliche at this point, but looks really aren't everything. They certainly don't speak to someone's worth as a person, or say anything about what kind of significant other that person might be. And a site where you deliberately exclude anyone who doesn't measure up to the community's arbitrary definition of beauty — a site that, in fact, actively cuts those who don't continually meet its standards — seems more like a good place to find judgement and stress than a real human connection.

But maybe that's just me. Still, here are five things more important when looking for a potential significant other than how attractive they are.

Again, maybe this sounds vaguely corny, but honestly, if a person isn't into anything interesting, they are probably not worth bothering with. They don't even have to like anything I like so long as what they do like isn't dull or predictable. I will take an ugly person over a boring one any day. Just saying.

2. Are They An Ax Murderer?

BeautifulPeople.com is obviously exclusive, but I don't see anything mentioned on their site about background checks or any other mechanisms for keeping dangerous people out of the member pool. Most dating sites don't, of course — but then, most dating sites also let anyone join. If you're going to be filtering people out, I am way more afraid of going on a date with somebody violent than somebody homely. I think most people are.

Yes, beautiful people are nice to look at, but that is only fun for so long. And personally, I have way more fun laughing than I do in staring at attractive humans. Someone who can make you laugh is probably a better pick than someone who's easy on the eyes.

If someone's not nice to you, what the hell does it matter if they're hot?

5. Do They Care More About Looks Than Anything Else?

(Actually, Gaston applies to pretty much all of these, doesn't he?)

Somewhat related to the first point, if someone cares more about physical appearance than they do anything else, that's not only dull, but also kind of insulting when you think about it. What kind of a relationship can you have with someone when you know that no matter how much they appreciate your sense of humor or your taste in movies or your thoughts on world politics, they never would have bothered with you if you didn't look a certain way? I find such people deeply, profoundly unattractive.

But then, I think we've established I wouldn't enjoy being on BeautifulPeople.com anyway. Their loss.